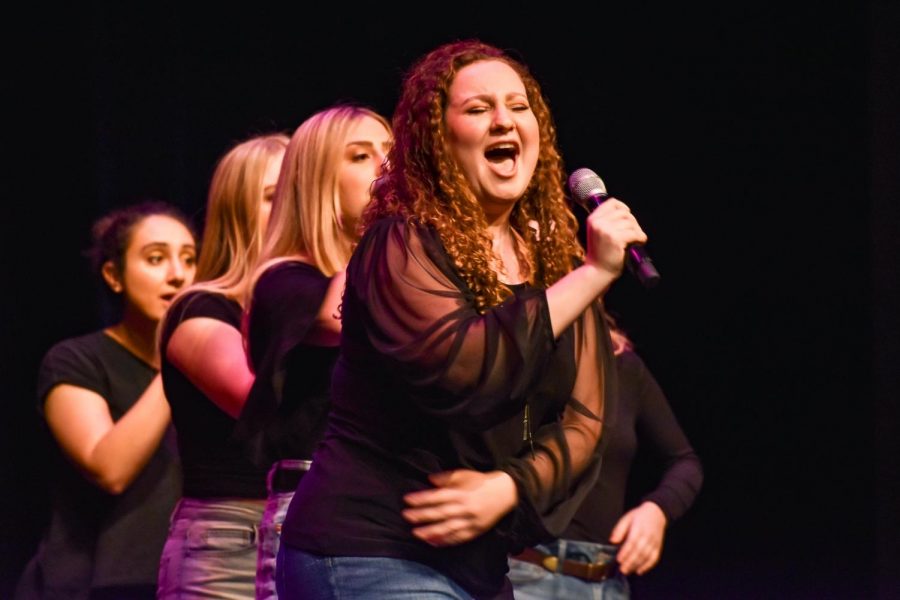 Meredith Forman '24 of Soulfege sang in one of the many student performances during the Evening of A Cappella. (Photo by Caroline Burns '22)

The Lafayette College Arts Society brought together its five student-led a cappella groups alongside three guest groups for a harmonious night of music at the Williams Center for the Arts last Saturday.

The 18th celebration of the Arts Society’s annual Evening of A Cappella concert hosted Lafayette’s Chorduroys, Cadence, Mar-Keys, Soulfege and A Very Large Trio, which made its debut at the concert, in addition to Muhlenberg’s Chaimonics, Rutgers’s OrphanSporks and Lehigh’s A Whole Step Up.

According to President of the Arts Society Lizzie Gumula ’22, members of Cadence and Chorduroys requested a yearly concert at the Williams Center for the Arts to showcase the a cappella talent of Lafayette groups in the early 2000s. Since then, the Williams Center has dedicated its stage for one night a year in celebration of the different a cappella groups on campus.

“There were so many new members that a cappella groups have gathered. For a lot of the groups, it was half of their group’s first time having an a cappella concert or performance. So, that was very special. I feel our talent has just grown every year,” Gumula said.

Historically, the concert has been used as a fundraiser to benefit two initiatives on campus. The first of these is the Friends of Lafayette A Cappella, which funds special projects for the a cappella groups, including recording albums, going on tour and competing in competitions. The second initiative is the Daniel P. O’Neil ’06 Foundation, named in honor of Virginia Tech shooting victim Daniel P. O’Neil ’06. The foundation supports engineering students’ senior projects, usually giving preference to engineering students who also have a project that intersects with the arts.

This year, the concert’s proceeds will also go towards a third cause. Announced at last month’s Percussion Ensemble Concert and named after Music Department Head and soon to be retired Professor Stockton, the recently created Larry J. Stockton Scholarship enables students to explore their musical interests without the requirement of enrolling in lessons for academic credit, performing with a Music Department ensemble or being a music major or minor.

Ticket sales for this year’s concert raised a total of $2,098 for these three initiatives.

According to Peter Canevari ’23, president of the Chorduroys, coming back from a virtual semester where music groups on campus had little opportunity to perform and rehearse posed some temporary challenges for the group.

“There was a lot of stuff that we hadn’t done in a year and a half, and a lot of people had graduated. So, we were trying to put pieces back together in terms of logistics, learning music. I think we’re at a good place now,” Canevari said. “We were so excited to perform the other night. We’re just so happy to be able to meet together as a group again, rehearse and spend time with each other because we’re all performers in the same group, but we’re all really close friends as well.”

“While all of Lafayette’s a cappella groups have different styles and taste, it is so fun for us all to come together for a night to celebrate each other and to put on a great show for our peers,” Annie Krege ’23, the music director of Cadence, said.

For Meredith Forman ’24, the music director of Soulfege, it was a thrilling experience to be able to perform again after nearly a two-year hiatus due to COVID-19.

“It was amazing to be able to not only sing with our own group but also hear the other groups on Lafayette campus. It was also nice to meet people from different schools who loved the same thing that we do and get to hear them sing,” Forman added. “It was just a really great community of people backstage that we all got to listen to and talk and share stories about our songs with.”