First for some, 57th for others: Lafayette-Lehigh rivalry attendees look forward to this year’s game 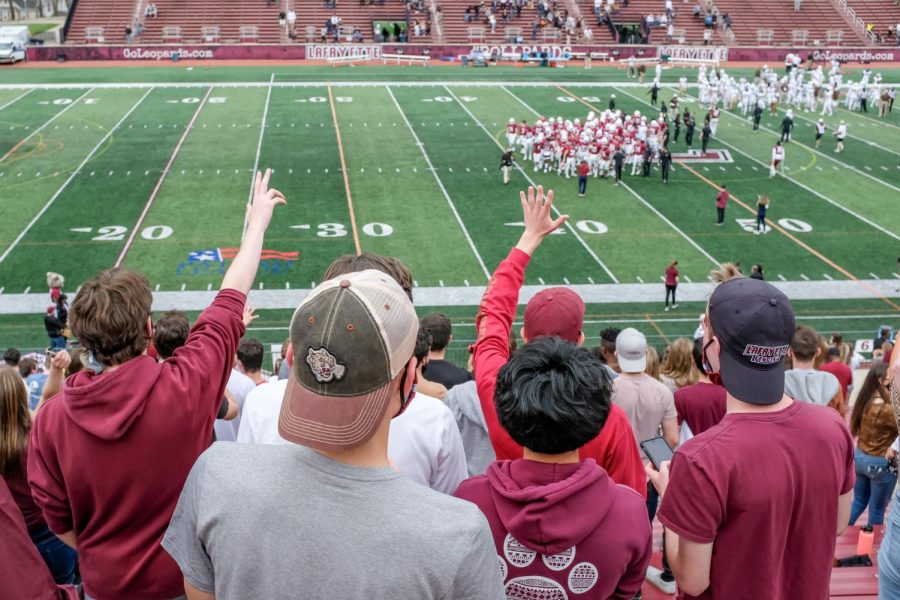 As a result of the pandemic and the postponement of last year's matchup, this year marks the first time that Lafayette and Lehigh will play twice in one year. (Photo by Caroline Burns '22)

In addition to thousands of current students, many lifelong fans will flock to Lehigh University’s Goodman Stadium this weekend to attend the 157th Lafayette-Lehigh game.

Cory Pressl ‘17 first attended the game in 2014. He now works as an assistant director of admissions and will be attending again, saying he “looks forward to getting to Lehigh nice and early on Saturday to enjoy the atmosphere and the game.”

Some fans have been going to the game even longer. Hugh Harris, former director of Public Safety, has gone to more than 35 Lafayette-Lehigh games and will be in the stands tomorrow. He added that the school spirit is his favorite part of rivalry week.

“The weekend events have become a family tradition particularly because my oldest son Hugh graduated from Lafayette in 2012,” Harris said.

The game has taken on personal significance for Chair of the Board of Trustees Robert Sell ‘84 and his family. He has been to 56 games, having gone to his first at 11 months old with his mother and father.

“The games in 1992 and 1994 were particularly special,” Sell said. “My cousin was the Lafayette halfback. We won both games and he was the game MVP.”

He noted that the tradition of rivalry is what makes this weekend so special.

“The tradition of old friends, even from Lehigh, gathering at one of the schools to celebrate a great tradition and rivalry. It is also great to see the next generations carry on the tradition,” Sell said.

“My favorite part is always the good-natured ribbing between the schools. We all know the schools do not really hate each other and our students do not hate each other, but some of the tweets from Asa Packers Ghost or Marquis Sword have been funny,” Diorio said. “This historic rivalry is part of what makes us unique and we could not have the rivalry without the other school, so it binds us together as much as makes us rivals on the field.”

“​​I had an amazing time cheering on my Leopards on the field and beating Lehigh made the day just that much sweeter,” Capriotti said. “I am very excited to hear, to see and to feel the roar of the Lafayette Leopards this Saturday as we will all be in Bethlehem together. Even my family will be visiting for this game.”

Kelly Mwaamba ‘22 will be attending for her fourth time. She hopes that she will be able to attend in the future as an alum.

“The energy of the crowd is unmatched and it’s such a fun experience to be a part of,” Mwaamba said. “After I graduate, I’ll definitely come back for rivalry week games because they’re just that much fun.”

A common topic among long-time fans is their favorite Laf-Lehigh memory in recent years. Harris emphatically stated his favorite memory is the 150th meeting that was played at Yankee Stadium, an opinion that other long-time fans shared nearly unanimously.

Diorio agreed that her favorite memory was the 150th game.

“Hands down, being in Yankee Stadium with a sellout crowd,” Diorio said as her favorite memory. “For a kid from the Bronx, it was amazing to be in that place.”

The 150th meeting was Pressl’s first game, remembering that the student section’s energy was unbeaten.

“The atmosphere was electric and it was a perfect introduction to the rivalry. Shutting out Lehigh on one of the biggest stages in the country was surreal,” Pressl said. “I don’t think the student section ever stopped screaming.”

Another shared sentiment among fans is confidence going into this weekend.

Diorio put her prediction simply: “We will win!”