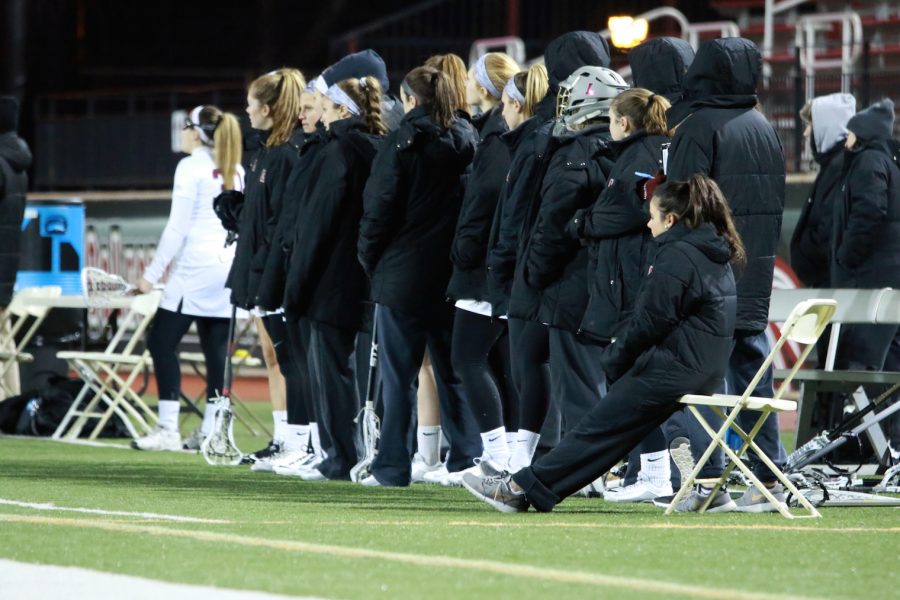 You can’t hit the ball out of the park every week—especially if it’s cold.

Blizzards, fluctuating temperatures and rain have taken a toll for Lafayette’s spring sports teams ever since players returned to campus from interim. The lacrosse, baseball and softball programs have all needed to adjust as Easton’s fluctuating weather forecast, beginning with Winter Storm Jonas, continues to complicate game and practice schedules.

“It definitely is a challenge,” women’s head lacrosse coach Alison Fisher said of the circumstances. “They don’t let us go outside if the wind chill is in the single digits, and if it’s between 10 and 14, or 15 and 19, we have restrictions in terms of how long we can be out.”

The men’s lacrosse home opener against Sacred Heart, which they lost 12-8, was originally scheduled for Saturday, but was moved to last Friday due to predicted low temperatures. According to goleopards.com, with the wind chill, the temperatures would drop as low as three degrees Saturday, far below NCAA regulations, while temperatures would be at a comparatively balmy 20 degrees on Friday.

Problems like these have been affecting northern lacrosse programs for years. According to men’s midfielder Morgan Westby, a senior, NCAA officials have discussed possibly pushing the start of the lacrosse season back into the spring by a few more weeks to avoid the need for rescheduling, and also to encourage more fans to attend.

“I think last year we only had one or two games where it was sunny and nice out,” she added.

Until official changes are made, all teams continue to adjust to the conditions.

Along with lacrosse, Lafayette’s baseball and softball teams have suffered over the years, but have adjusted their schedules to accommodate their different field and weather issues. Baseball has just two home games in February and March, while softball doesn’t open on their field until April.

Instead both teams practice in the Morel Field House and outside, on either Fisher or Rappolt Field, as much as they can. They also travel south for the first half of their season.

“It’s very different being on turf as opposed to being on an actual field and being on dirt,” sophomore second baseman Samantha Sweigart said. “But in the end it really just comes down to how many reps we’re getting and the quality of those reps.”

Despite the various weather restrictions, all of the spring sports remain optimistic about the futures of their seasons, arguing this winter to be better than previous ones.

“Baseball in the north is completely, just a different animal,” junior pitcher David Bednar said. “You just have to have the same mindset about it and just play the game.”