Remembering Karl Stirner: A tribute to the godfather of Easton art 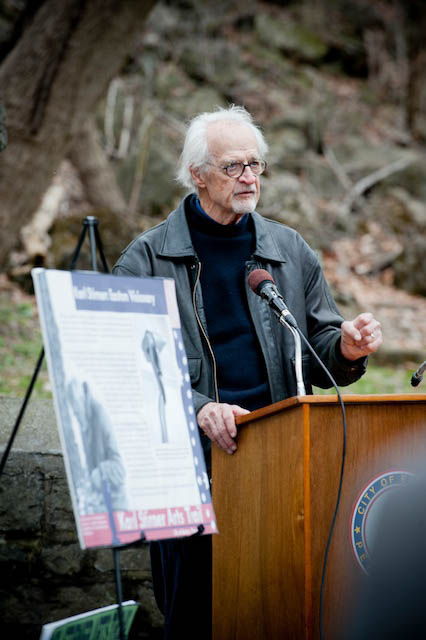 One week ago, the Easton Community said goodbye to a local legend.

Karl Stirner, a pioneer in the Easton arts community, passed away last Friday. Stirner was 92.

The Easton City flag was at half-staff until the afternoon of Monday in honor of Stirner and his impact on Easton.

Stirner was more than just an artist around town; he was instrumental in revitalizing Easton’s art community, and, eventually, the former Bushkill Trail was named after him—it is now the Karl Stirner Arts Trail.

The arts trail is an integral part of Lafayette’s community, with the trail having hosted several notable events and being used by Lafayette students and faculty to display pieces on a regular basis. The Karl Stirner Arts Trail features several pieces of art from Stirner himself, and other artists including Patricia Meyerowitz, David Kimball Anderson and Willie Cole.

Director of Community-Based Teaching at Lafayette Jim Toia, who is also the chair of the Karl Stirner Arts Trail, experienced firsthand Stirner’s enormous influence in Easton and on Lafayette’s campus. He stated that Stirner was “the biggest cheerleader of Easton as an arts community you could ever ask for.”

Toia had much to say about Mr. Stirner and his profound impact on Easton and the legacy he leaves behind. Stirner encouraged people from all over to get involved in the arts and to believe in Easton as an arts community. People from New York, Philadelphia and even parts of Europe came to visit to support the arts community because of Stirner.

Toia also recalled that Stirner often said that Easton’s architecture was so well suited for the arts and art studios.

Stirner moved to Easton in 1983, and ever since he has made a profound impression on Easton’s arts community. Director of Art Galleries and Collections Curator Michiko Okaya met Stirner when he moved to Easton and said that upon his arrival, “He renovated an enormous warehouse on Ferry Street which included studios and work space for dancers, artists, architects, photographers along with his personal residence and studio.”

Okaya also discussed Stirner’s influence at Lafayette. She recalled when Stirner’s art was featured in the college, saying, “The Williams Center Gallery had an exhibition of his works in January of 2001. He showed the piece ‘Hounds of Hell’, which is currently on display in the Ahart Arts Plaza downtown.”

Stirner also helped several Eastonians develop their art and become integrated in the arts community. Toia also mentions that Stirner “took a lot of artists under his wing,” making it easier for them to move into Easton and set up their own studios. Stirner’s role in helping establish artists reaches deep within Easton, proving how he was an integral member of Easton. Stirner had several supporters here in Easton- people who not only supported his art but also appreciated his commitment to Easton’s community as a whole.

Stirner lived an extraordinary life, and has left an impact on countless people in Easton and beyond. He will be truly missed by all faculty, students and members of Lafayette’s campus and the Easton community as a whole.