Track and field have a strong showing at Moravian Invite 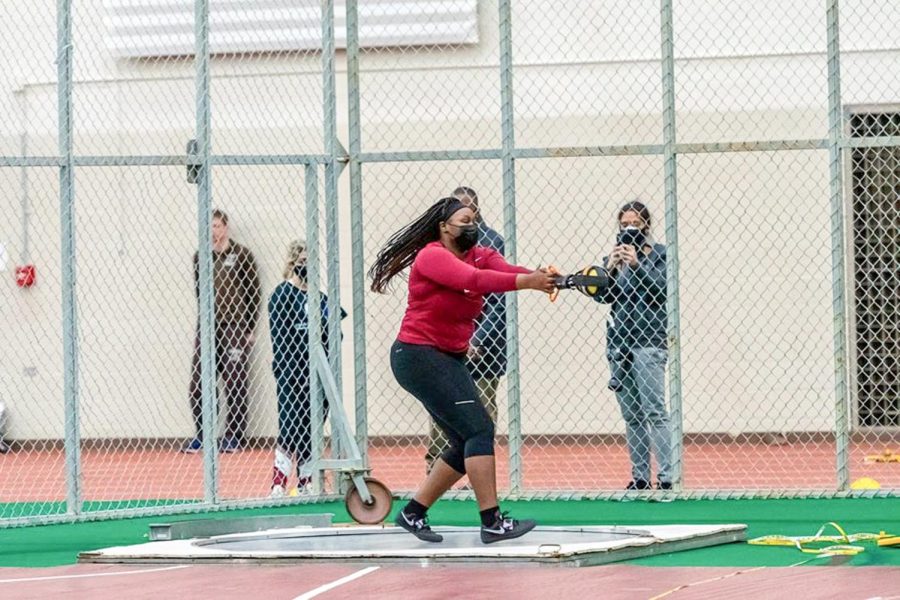 Junior Solape Fakorede (pictured) participating in the weighted throw competition as the women finish in second and the men finish in 5th at the Moravian Invite last weekend. (Photo courtesy of GoLeopards)

The women’s team was highlighted by sophomore Juliette Delmotte, who won two events. Delmotte’s first win was in the long jump event with a top mark of 17′ 11″.

The long jump was something Delmotte expressed she wanted to work on coming into Lafayette.

“I was hoping for a PR [personal record], and I beat my high school PR by over a foot. It gave me a lot of confidence in my long jump,” Delmotte said.

Delmotte then went on to win the triple jump with a top mark of 37 11/4″. Both these scores marked the eighth-best in school history for the respective events. Delmotte said she never expected to make the top 10 list, but that it just takes one meet to change that.

Another big performance in the long jump came from junior Eliana Liebman, who finished in third out of 28 jumpers (17′ 43/4″). Liebman also finished third in the triple jump (35′ 8″).

“[Liebman] did very well and helped push me,” Delmotte said.

Junior Grace O’Mara won the shot put with a mark of 42′ 4″, taking the seventh-best record in Lafayette history in that event.

The Leopards took third through sixth place out of 21 throwers in the women’s weight throw, with O’Mara leading Lafayette once again with a throw of 48′ 71/4″. Junior Meredith McGee was behind O’Mara in fourth place (46′ 23/4″), with junior Solape Fakorede (45′ 61/4″) and sophomore Julie Soldat (44′ 11/4″) finishing in fifth and sixth place, respectively.

Freshman Angel Awono finished second overall in the 60-meter hurdles in 9.57 seconds. Delmotte said that this was Awono’s PR for the event and that they hyped each other up for their accomplishments in the meet.

Junior Alex Avery kept the momentum going for Lafayette, finishing fourth out of 30 runners in the women’s mile run (5:29.46). Another fourth overall finish came from freshman Julia Greeley in the pole vault with a top mark of 10′ 2″.

Additional second-place finishes came from freshmen Jack Lynett in the pole vault (13′ 113/4″) and freshmen Quinn Curtin in the triple jump (43′ 101/2″). Delmotte said that Curtin’s mark was a personal record as well.

Freshman Charley Eagle rounded out top five placements for the Leopards on the men’s side with a fourth-place finish in the 3,000-meter run with a time of 9:03.06.

“I think a lot of our freshmen haven’t had the time to really train and adjust to college, but they’re on their way to being really good and have a lot of potential,” Delmotte said.

The Leopards will be back in action tomorrow with a dual meet against Lehigh at 2 p.m. In preparation for the rival team, Delmotte said the team has been working on technique.

“We’re rounding out training for everyone, and we should be ready for the meet,” Delmotte said.