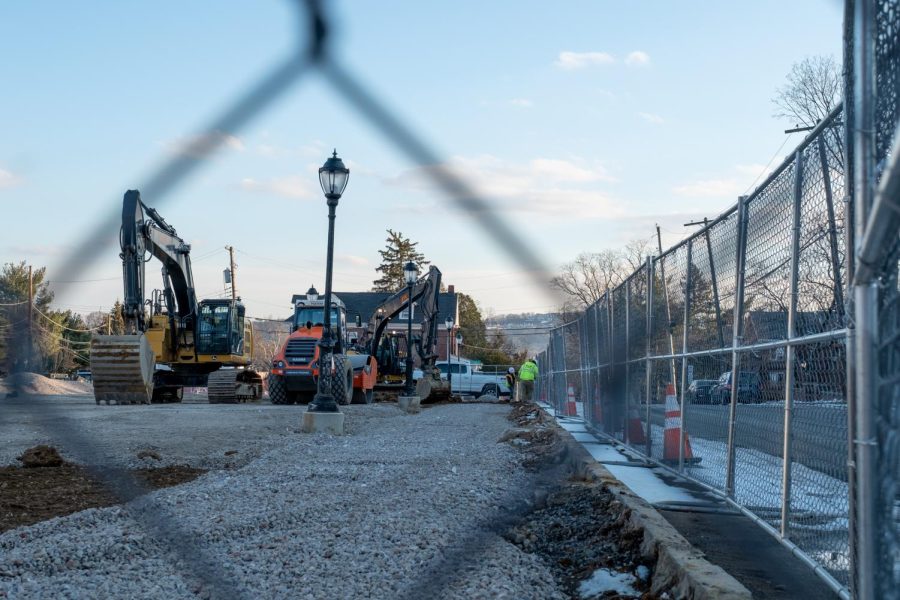 The temporary lot will be constructed at the future site of the McCartney Street student housing development, originally scheduled to break ground in 2024 as a part of the Phase 2 expansion plan. (Photo by Caroline Burns '22 for The Lafayette)

The estimated 10 million dollar project to replace the Markle Parking Deck is officially underway. Demolition of the original deck began over winter break, and the excavation for the foundation of the new deck begins next week, according to Interim Vice President of Finance and Administration Craig Becker.

The new deck is on track to be completed by the end of August, Becker wrote in an email. Once finished, the new deck will not only accommodate more people–adding 228 parking spots under the plan proposed by the Board of Trustees in Feb. 2021–but will also offer an improved admissions entrance to Markle Hall.

To accommodate for the temporary loss of parking spots created by the demolition of the Markle Deck, the college demolished the buildings located at 101-133 McCartney St., 518-524 March St. and 518 Hart St. over break to create a temporary parking lot.

Becker wrote that the demolition of the buildings went smoothly.

“The buildings were all owned by the college. The construction team did not encounter any criticism when the demolition process was taking place. All the structures were demolished without incident,” he wrote.

Weather permitting, the lot will be completed by Feb. 1.

“Cold weather and snow have added challenges to our ability to maintain the schedule,” Becker wrote.

With the temporary lot still under construction, the college has added about 250 parking spots by expanding places where students and faculty can park as well as “trying to maximize the use of existing space,” Director of Public Safety Jeff Troxell said.

Among the spaces where spots were added include the McCartney temporary lot, Buck Hall, William Center for the Arts as well as a lot on North 3rd Street. To accommodate for the increased number of staff who are parking at the Bushkill lot, the college commissioned a “Bushkill shuttle” which operates from five in the morning until six at night, Troxell said.

While he noted that fewer students have been able to secure parking this spring in comparison to other semesters, there is not an extraordinary shortage when it comes to the number of parking spots. The challenge, Troxell said, is getting people to follow the rules regarding where and when to park.

The Markle Deck replacement is just one of a handful of construction projects underway at Lafayette.

According to Becker, the fifth-floor expansion of Acopian Engineering Center began over winter break as planned and is on target to be complete and open for fall 2022. The renovations for the Rinek Rope Works, an old rope factory on Bushkill Drive that the college hopes to renovate into a space for civil engineers, involve all exterior facade work and are slated to begin in late March 2022. The financing for the Kunkel Hall renovation is “in hand,” and the design team is “in the process of “re-confirming the program and design parameters before finalizing the construction documents,” Becker wrote.

Becker noted that while many of the projects are on track, balancing the impact of the pandemic and ongoing supply chain issues means each day brings a new challenge to be solved.

“As you can imagine, like many companies, institutions, and for that matter, households, we are seeing supply chain and labor challenges throughout the college’s operations,” Becker said. “We are developing contingencies and adjusting plans and schedules accordingly. This may be our ‘new normal’ at least for the foreseeable future.”