Board of Trustees rejects greater faculty involvement in enrollment 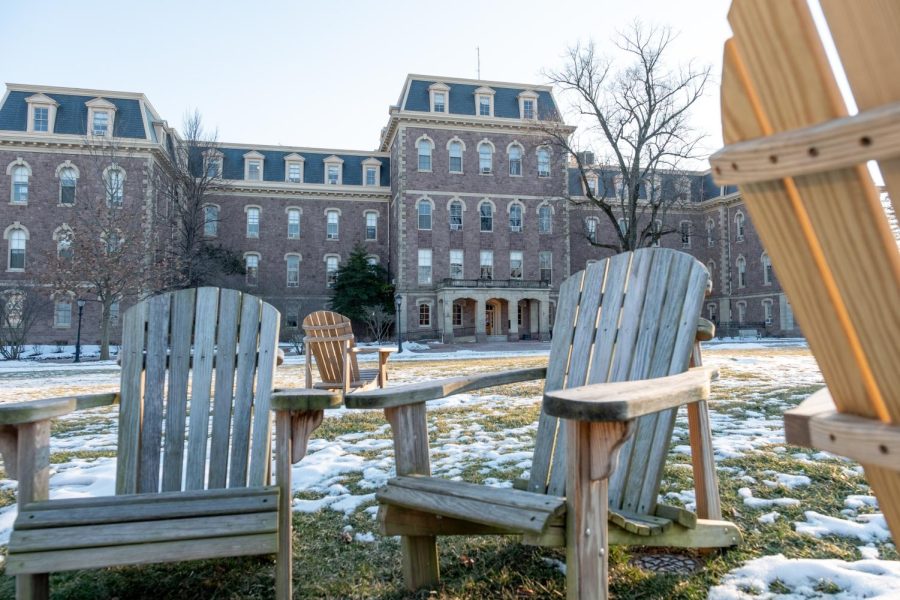 The faculty created the motion after what they consider to be a miscommunication over the enrollment size of the class of 2025. (Photo by Caroline Burns '22)

This Tuesday, the Steering Committee of the Board of Trustees announced they will not hold a vote on a faculty motion that called for greater faculty involvement in setting enrollment numbers, effectively denying the motion.

In May 2021, faculty members passed a motion with overwhelming support to modify the faculty handbook requesting more voice in determining the size of enrollment. The motion specifically called for the Enrollment Planning Committee (EPC) to “determine the yearly enrollment target in collaboration with the President, Provost, and Vice President for Enrollment Management, and report to the faculty the rationale and likely academic ramifications of this target.”

The motion was created after the faculty’s discontent with the large size of the class of 2025—with over 780 students, it was the largest in school history.

According to Mathematics Professor Justin Corvino, the current chair of the EPC, the number of students presented to the faculty for the class of 2025 was already above average due to a smaller class of 2024 and former President Alison Byerly’s plan to increase the size of the student body. Without consulting the faculty, the administration further raised the class size.

History Professor Joshua Sanborn, chair of the EPC last spring, added that “there was a lot of frustration on the EPC last year about the fact that the committee, which is supposed to have meaningful input into all of the major enrollment policy discussions at the college, had basically been sidelined when it came to determining enrollment numbers.”

“Faculty concerns were that enrolling an extremely large class after a small class had to be planned for,” Sanborn said. “We had not seen a lot of planning taking place to deal with that; we were trying to get that planning to happen, and our committee was not getting a response from the administration, so that’s why we said we need our committee to be in charge of this, we can make sure these things are front and center when we make the decisions about how many students to admit going forward.”

Bob Sell, the chair of the Board of Trustees, acknowledged that there could have been more collaboration.

The board cited three main reasons in their response to the faculty members.

Referring in part to the document’s explanation of the first reason, Sell said, “we would not want to be anticipatory of or prejudicial to outcomes that will be determined by the faculty and the ongoing work of faculty governance.”

The second reason in the response was that the Steering Committee wanted to give Hurd and her administration the opportunity to implement change before editing the handbook.

“There’s a point in the note to the faculty where the board remains optimistic that…these issues can be addressed without any type of statutory or legislative change. If we all behave the way we’re supposed to behave, do you really need to write down the rule?” Sell asked.

Hurd, who was not in office when the motion was passed by the faculty, has stated that collaboration and shared governance are an important part of her mission at Lafayette.

“One of my priorities is really to bring a values-based lens into everything we do, meaning that faculty, staff, students, administration, trustees, all work together to really define our next chapter,” Hurd said. “Whether it’s enrollment or budget or diversity and inclusion, I’m really interested in creating spaces where we can make decisions together and move forward together.”

“The board is very supportive of a new president and their administration working with the faculty,” Sell said. “We’re trying to give them a chance to foster those new values and behaviors and we don’t want to put in front of that, a change to the handbook, and somehow be de minimis of the good progress being made by the President and her new approach.”

The third reason that the Steering Committee gave, Sell described as “pragmatic.” He said that the Board of Trustees was “not really ready” to discuss shared governance vis-á-vis enrollment because it would bring about “a broader set of governance questions.”

Sanborn stated that, while he appreciated the time and thought that the Steering Committee put into their response, he still has some concerns.

“It’s very important to signal through talking that shared governance is important, and I’m glad that the Steering Committee has done that, as well as President Hurd too,” he said. “But there also needs to be concrete action and this was actually not that big of a step for the College, to officially position the faculty in an important place.”

Sanborn added that he was “still hopeful” about recovering a shared governance structure with the Board of Trustees.

Corvino, on the other hand, had a more pessimistic outlook, stating that he has limited clarity on the high-level goals of Hurd and the Steering Committee.

“I don’t know where the Steering Committee is going with this because they didn’t contact me, or the previous chair of EPC, to talk it through,” he said. “I’m disappointed in that.”

Corvino went on to say that the ball was in Hurd’s court.

As for Hurd, she is optimistic about the Steering Committee’s relationship with the faculty.

“I don’t see the motion or the response from the Steering Committee as anything other than positive signs that we want to work together and that we all see the importance in working together,” Hurd said. “Whether we decide to change things in a handbook or whether we decide on different committee structures to create together, I’m ready to roll up my sleeves and create what’s best for Lafayette in a really collaborative way.”

Multiple sources declined to share the exact text of the Steering Committee’s response to faculty.

Correction 2/4/22: The administration, not the Board of Trustees, further raised the class size of the class of 2025 without consulting the faculty.