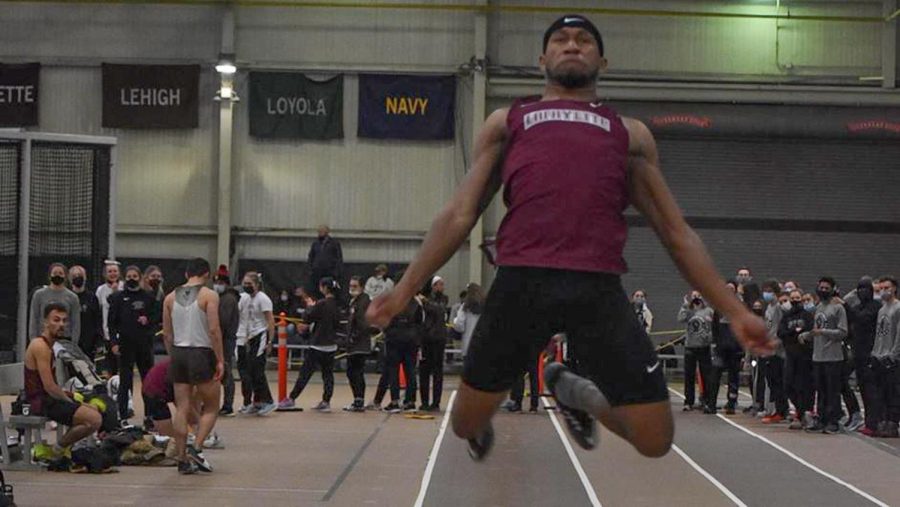 Senior Jordan Anderson was the only first place winner on the men's side as he jumps for the Leopards in their loss in the dual meet against Lehigh. (Photo courtesy of GoLeopards.com)

The Leopards made the short trip over to Rauch Fieldhouse in Bethlehem on Saturday, Jan. 29 for their first dual meet of the season against rival Lehigh. The women’s team fell to Lehigh 113-68 and the men 122-59.

“We really focused on this all week. We didn’t necessarily prepare differently, but I feel like people’s mentalities at practice changed. We took it really seriously,” freshman pole vaulter Jack Lynett said.

Unfortunately, a simple discrepancy immensely affected the result of the meet. Lehigh’s roster is composed of 138 athletes, which is over 50 more than Lafayette’s squad. Given the nature of dual meets, where each participant has the chance to score points for their team, this put the Leopards at a considerable disadvantage.

“They’re a big team and have a lot more people than us. We probably have more talent, but we lacked the roster size to put as many numbers on the board as possible,” Lynett said.

“The team did pretty well performance-wise. We didn’t have as much depth in events, that played a huge factor,” sprinter Freshman Ryan Moore said.

This depth will be on Head Coach Michele Curcio’s mind as she looks to recruit athletes for the class of 2026, a task several teams on campus have recently finished.

Lafayette won three events on the women’s side and one on the men’s side.

The win for the men’s side came from senior Jordan Anderson in the long jump with a top mark of 23′ 31/2.”

Given that this was the first dual meet of the season, athletes were able to feel the difference compared to the invitationals that they’ve been attending throughout the season.

“Saturday felt more like a team event than the individual nature of invitationals,” Moore said. “It felt more hyped up. Each team was cheering for their athletes. Even though there were only two teams present, it was very loud in the arena. Easily the loudest event of the year so far.”

Curcio encouraged the team to put their hearts into their events.

“She told us to ‘Go out there and give it your all. You have to score points for your team,’” Moore said.

Evidently, the athletes felt a greater responsibility to the outcome of this matchup. Instead of solely aiming for their best individual performances, they directly recorded points for their team and contributed to the overall score of the event.

Despite the negative result on Saturday, there are plenty of chances for the team to bounce back. With three invitationals taking place in February, the month culminates with the Patriot League Indoor Championships on Feb. 26-27. After that, the team heads straight into the outdoor season.