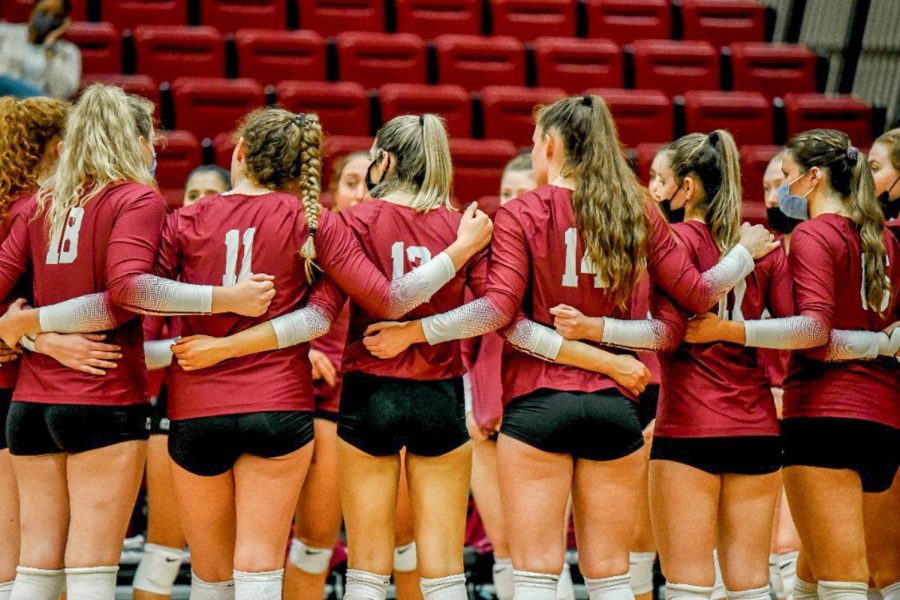 The women's volleyball team adds five new members for the class of 2026, providing even more hope for an already bright future. (Photo courtesy of Hannah Simmons)

As the lights turned off at Cottrell Court at the end of the night in Hamilton, NY on Nov. 20, volleyball’s record-setting season finally ended with a loss to American in the Patriot League semifinal.

However, after finishing the year with the best record in school history, and a record that has improved consecutively over the past three years, there is renewed hope on College Hill.

“I’m proud of all we accomplished last season but definitely ready to put in the work to make next season better, I hope to get back to the Patriot League tournament and win, we definitely have the potential to,” sophomore Alyssa Vitale said.

Adding to that hope are the five new recruits for the class of 2026. From all over the country, the five signees represent the future for Lafayette and the spirit of success that is blossoming for the volleyball team.

“We are definitely excited for the immediate impact that the new class is bringing to the table, both on and off the court. As a program, when we are going through the recruiting process, we are looking for good people first and foremost because we believe good people make great volleyball players,” Patriot League Coach of the Year Ryan Adams said. “All five of our incoming recruits are not only great volleyball players who will add value on the court, but they are even better people who will add value throughout the college community.”

Hannah Ehrich-Pollock, a 5’11” middle blocker from Palm Beach Gardens, Fla., has competed with the USA Volleyball Girls Junior National Team and started for them on multiple occasions. Playing primarily club ball throughout high school, she came to her school’s team as a senior and immediately started.

Emily Gouldrip is a libero from Los Gatos, Calif. standing at 5’3” who started all four years on varsity and stacked up over 1000 digs in her time at Los Gatos High School. Maintaining a 4.0 GPA throughout high school, she was named to the All-League team in all three of her eligible years.

Shannon Knight from Manhattan Beach, Calif. will be a dominant force as an opposite hitter for the Leopards standing at 6’1. Playing both beach and hardwood volleyball, she led her beach team to four consecutive state championships and is currently on a 172-game winning streak.

Abby Nicholson, a 6’2” middle hitter from Savannah, Ga., was named captain both junior and senior year in her high school career as a four-year starter. A member of the National Honors Society, she was named to the all-region team three times.

Carol Ulichney from Wayne, Pa. is staying put for college as she competes as an outside hitter for the Leopards. Standing at 5’11, the academic distinction recipient was an Under Armor All-American who led her team to a gold medal and received the award for best attacker in the Capitol Hill Classic.

“I’m excited about the incoming girls. They’re a pretty tall recruiting class, which should really benefit us in the front row,” Vitale said. “I think this will continue our team goals of being strong offensively since that’s generally what we focused on last year. I’m excited to see how they fit in and add to our competitive culture.”

The Maroon and White will now look to the future as they look to capitalize on their momentum from their successful season and try and use these new commits to fill the holes left by the seniors and reload for the next season.

“There’s definitely big personalities and key players that we won’t have, but I think this is a great opportunity for everyone to step up and embrace the challenge,” Vitale said. “Since we don’t have captains… everyone will have an opportunity to lead in their own ways. I’m excited to see how the dynamic changes and how the team gets closer.”

Adams inherited a team that consistently struggled to get out of the basement of the Patriot League and four years later, everyone in the Kirby Sports Center has their eyes on a championship. With this new recruiting class, the table is now truly set for the Leopards to continue this upwards momentum into next season.

With a young team led mostly by freshman and sophomores, these new recruits could serve as the final catalyst to push the Leopards past the defending champion Colgate and to Patriot League glory.

“While this past year’s success was an exciting experience, we believe that’s the only beginning for what this group of young women can accomplish,” Adams said. “For us, the focus is all about the process with zero regard to the results, and that mentality is how we can continue to get better year-in, year-out.”

Lafayette volleyball will soon begin open spring ball with eyes on fall 2022 as they prepare to bring home the first league championship to Lafayette.