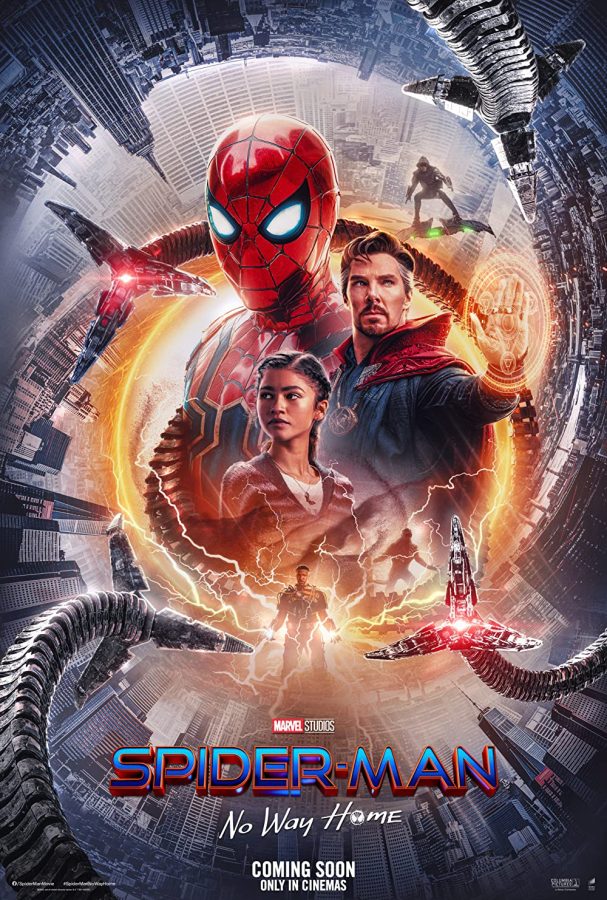 'Spider-Man: No Way Home,' features Spider-Man working to return villains from alternate dimensions back to their respective timelines. (Photo courtesy of IMDb)

Despite the continued presence of the COVID-19 pandemic and the ongoing growth of the streaming industry, “Spider-Man: No Way Home” is definitive proof that demand for the in-person movie theater experience remains as high as ever. In its opening week, the film brought in a staggering $600.8 million worldwide, making it the third-biggest worldwide launch ever after “Avengers: Endgame” and “Avengers: Infinity War.”

Much like Marvel’s “Avengers” series, “Spider-Man: No Way Home” is about celebrating the legacy of iconic characters as they converse, interact and fight with one another, with a few emotional climaxes thrown in. While it may lack structural cohesion and substance, the film strongly delivers on its promises, and it will be very interesting to see where Marvel films go from here.

The plot picks up right after the events of “Spider-Man: Far From Home,” in which the true identity of Spider-Man (Tom Holland) is revealed to the world. No longer able to protect the lives of his friends and family, Spider-Man seeks the magical powers of Dr. Stephen Strange (Benedict Cumberbatch) to reverse time. However, when the spell goes awry, villains from other dimensions are accidentally brought into Spider-Man’s universe. Eventually, Spider-Man is tasked to return all of them to their respective timelines, setting into motion a journey of new alliances, self-discoveries and consequential choices.

What carries this story is Spider-Man’s emergence into adulthood. He’s no longer the carefree high schooler or the friendly neighborhood Spider-Man he used to be, but a grown man who has learned to carefully calculate the consequences of his decisions. Additionally, he discovers the limits of his superhuman abilities and learns how to be more open to support from other superheroes. Ultimately, this coming of age story creates a much grittier and more impactful experience where we see the young Spider-Man’s ascension into a leadership role.

The remarkable success of “Spider-Man: No Way Home” is also partially owed to its brilliant trailers, which advertised actors Alfred Molina and Willem Dafoe reprising their respective roles as Doctor Octopus and Green Goblin. Molina and Dafoe last portrayed the two iconic Spider-Man villains nearly two decades ago in Sam Raimi’s “Spider-Man” trilogy. Their unprecedented appearances sparked widespread rumors among fans that other villains and heroes of the past might also return to the Spider-Man cinematic universe.

I felt the villains were effective and formidable obstacles. They are quite menacing in the way they exploit Spider-Man’s inexperience and vulnerabilities. Additionally, Doctor Octopus and Green Goblin know how to work together, which is quite challenging for Spider-Man, who feels that those around him are incapable of relating to his current circumstances. This makes for a film that has great emotional stakes and high dramatic intensity.

There’s little else I can analyze without giving away the twists, which is the main reason to see it. However, what I can say is that this film is a top-tier Spider-Man picture that stands alongside my two favorites: Sam Raimi’s “Spider-Man 2” (2004) and the animated “Spider-Man: Into the Spider-Verse” (2018). “Spider-Man: No Way Home” is a remarkable achievement and a testament to Marvel’s storytelling abilities, which continue to surprise us with variations on classic superhero storylines.