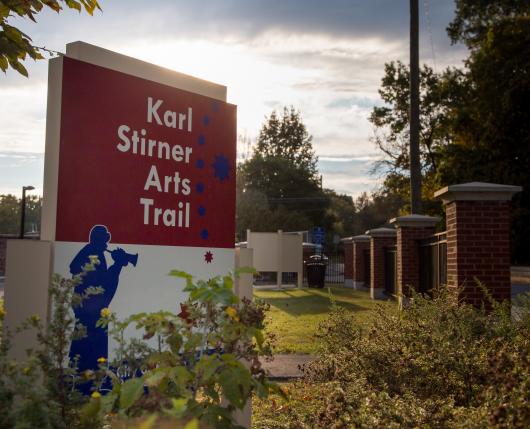 Lafayette students seeking time away from the bustle of campus may find themselves wandering down to the nearby Karl Stirner Arts Trail along the Bushkill Creek.

The trail celebrated its 10th-anniversary last year in 2021, and it continues to emphasize place and community with thought-provoking art pieces and lush natural spaces. However, the Arts Trail was not always there for student enjoyment.

The trail is named after Karl Stirner, who, according to the trail’s official website, “spent 25 years as a mentor and unofficial real estate agent, ushering aspiring artists to Easton.”

According to Jim Toia, the trail’s executive director and curator, the idea for the trail was born in 1999 when Easton and Lafayette College were given a $9 million grant to help improve the North 3rd Street and Bushkill Creek corridor. Construction on the trail did not end until 12 years later in 2011.

The project’s complicated nature caused many of these delays. Easton and Lafayette had differing motivations for building the trail. Easton wanted to turn the defunct silk mill into a commercial entity with both residential and commercial elements, as well as provide a natural space for nearby pedestrians. Lafayette wanted to improve the section of North 3rd Street where the school had just bought a new visual arts building.

Toia said that Mayor Sal Panto consulted Richard McAteer, a major contributor to the revitalization of Easton, to decide on a developer. McAteer advocated for the trail to be an arts trail. He was tasked with finding advisors and artists to assist with the project. He reached out to Toia and Professor Ed Kerns, head of the Lafayette art department, as well as a group representing the Easton community.

This marked the beginning of a tradition of care in the selection of stewardship that Toia continues with his curation of the art on the trail.

In addition to its permanent pieces, the trail contains a few temporary works of art that constantly come and go. For instance, approximately every six weeks, the “Young Masters” project invites a different group of students or kids from the area to create individual framed pieces on the blue bridge.

The trail also features timely political pieces that are on their way to becoming a permanent part of the trail.

“On Thirteenth Street, where the ‘Young Masters’ used to be, there is an installation. It’s a Black Lives Matter mural by Habib Fall, which uses some of his heroes…Harriet Tubman, James Baldwin and Angela Davis…He’s melded that with images of the Underground Railroad and some abstraction,” Toia explained. “It’s a really beautiful mural that we put up and couldn’t take down.”

There are also new projects coming to the trail in the near future.

“There’s a really interesting project that’s coming to the trail this summer, a commissioned work by Heidi Wiren Bartlett…She’s going beyond the industrial, looking at the entire history of Easton and the formation of Easton,” Toia said.