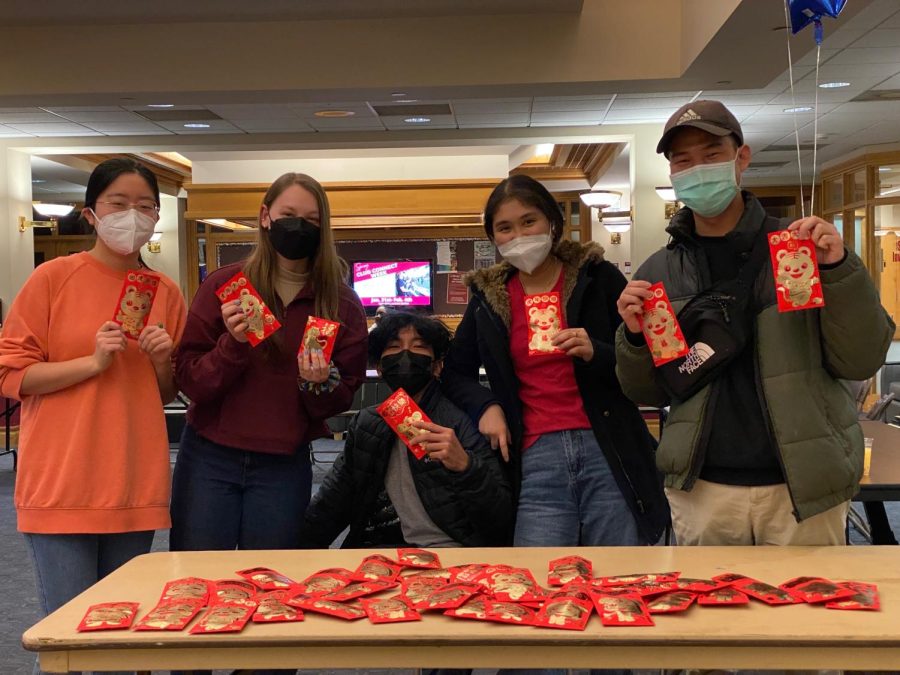 Members of the Asian Cultural Association and the Lafayette Chinese Program hand out red envelopes. (Photo by Susanna Hontz '24)

This past Tuesday, the Asian Cultural Association (ACA) and the Chinese Program collaborated to celebrate the Lunar New Year with the Lafayette College community. Lunar New Year is one of the most important events among East and Southeast Asian cultures.

According to the National Museum of Asian Art, the Lunar New Year celebrates the arrival of spring and marks the beginning of a new year on the lunisolar calendar; 2022 is the year of the tiger.

Due to the Covid pandemic, the cultural groups were not able to share food or play indoor games on campus as they have done before. Instead, they asked the Upper Farinon Dining Hall to prepare a special Lunar New Year menu that included dumplings, spring rolls and boba tea.

“The purpose of this event is to celebrate the start of the Lunar New Year, which is believed to bring good fortune and joy for the coming year, and share our happiness with everyone at Lafayette,” Tzeng said.

Also known as the Spring Festival in China, Lunar New Year is a fifteen-day celebration marked by many traditions; while the official dates for the holiday vary by culture, many who celebrate consider it a time to reunite with family.

Tzeng noted the large success of the event and emphasized how great it was to see the Lafayette community come together in celebration.

“The event went perfectly. We decorated the Upper Dining Hall with paper cuttings, Spring Festival couplets and lanterns, which really created the Lunar New Year Celebration vibe,” Tzeng said. “Besides the decorations, we were really glad to see a lot of people come and enjoy the food.”

The ACA and the Chinese Program also gave away red packets, traditionally considered a token of good luck, in the Farinon Atrium on Tuesday. On Lunar New Year, it’s a tradition to gift red envelopes–which are often filled with money–to family and friends; in Chinese culture, the color red symbolizes good luck and prosperity.

“More than a hundred of the red packets we prepared were even given away completely in just twenty minutes,” Tzeng said. “Overall, I really enjoyed the whole event from the decoration, food, to the red packet giveaway.”

Pa noted the difficulty of planning while navigating the pandemic but emphasized her excitement for even larger celebrations in the future.

“Planning for it was quite stressful due to the timing and the pandemic. It’s hard to plan an event that’s occurring right when school just started,” Pa said. “We hope next year we could include more festive activities and make the event even bigger and more fun.”