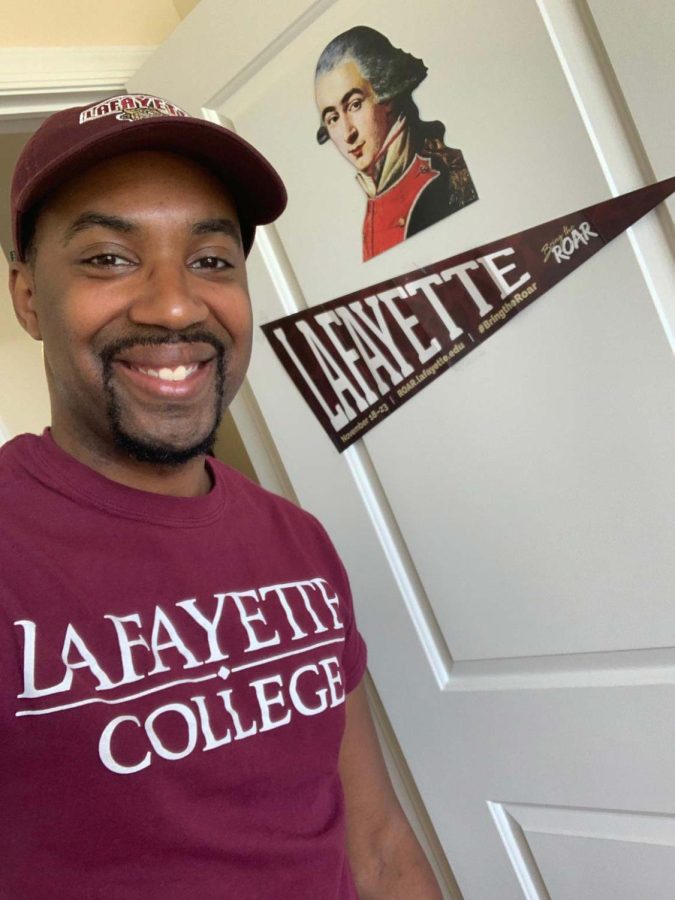 Dean of Advising Tim Cox served in the role of interim dean of advising for six months prior to starting the permanent position. (Photo courtesy of Lafayette Communications)

Sitting down in Dean of Advising Tim Cox’s office, students encounter a graduation cap in the middle of the table in front of them. This serves as a reminder for students of why they are at Lafayette, their goal is in reach and it is okay to need the extra support.

Cox came to the college in September 2019 as the associate dean of advising and co-curricular programs and assumed the role of interim dean of advising in August 2021. He assumed his new role six months ago, but he still has not moved into the office of the dean of advising, not wanting to be presumptuous.

“I could have very well moved my things over there, but it was humbling to be in an interim dean position. I also didn’t want to assume that I will be granted the opportunity,” Cox said. “So, I’m here to say it doesn’t matter what space I’m in. It doesn’t matter what the title is. I’m still doing the same work. Yesterday was the official first day but nothing changes, right? New month, new title, new vision, but my mission is the same.”

After two and a half years, he said he is still truly enjoying the experience.

“Great team, great faculty, amazing students…it is truly a joy to be here,” Cox said. “I came to Lafayette because I’ve never worked at a private liberal arts institution. Prior to that, I was always at public schools, and I wanted to be a part of the culture, the environment, what it’s like to be in a close-knit atmosphere.”

As dean of advising, Cox supports students and staff alike. The Office of Advising and Co-Curricular Programs support “students in achieving their academic, professional, and personal goals,” according to a press release from Lafayette Communications.

“We’re in an unprecedented time. What we’ve been dealing with for the past two years, we’ve never dealt with before,” Cox said. “What we’re recognizing this semester is different from the last. We have students that are coming in with more unique challenges that we’ve never had to face before.”

His office is not limited to students, Cox explained. Faculty sometimes seek them out to learn how to better support their students as well.

“We have faculty saying ‘Hey, how do I connect with these students on this level?’” Cox said. “I love it because I think we are invested in figuring out the best ways to support our entire community.”

Sometimes the best way to support the students is not always easy, Cox explained, such as working with a student and telling them that they need to put themselves first.

“I’ve cried with students, which is why I have a box of tissues here. I’ve hugged students as they left the door. But I always ended in a way of, ‘We’re always here. Your relationship with Lafayette doesn’t end because you take a step away for a semester,'” Cox said.

While his role requires a lot of heavy lifting, Cox explained that he always tries to end difficult meetings with students on a good note.

“I have extra tassels, and what I did for students was to say, ‘Listen, you take this and you hold on to it, and next year when I see you, that’s what you’re going to have on your cap,” Cox said. “It’s humbling because we recognize that there are stressors or situations that we may not have identified with ourselves. We recognize that students are going through some really tough things here. So it’s humbling because I recognize that we’re all human, and life is precious, and so getting that truly makes me value how important care and community is.”

Additionally, he tries to end email correspondences with students with the phrase, “we got this,” to let students know that their academic success is a collaborative effort.

“He absolutely radiates the best of what Lafayette’s about. I think he has such an inclusive vision and he’s so dedicated to our students,” President Nicole Farmer Hurd said.

Determined to make the Office of Advising more known among students, Cox explained that a student can reach out to the dean anytime.

“You can come to meet with the class or anyone from our office if you just want to say hey, ‘Here’s my goals. I’m thinking about going to grad school, or I’m thinking about doing this,’” Cox said. “We’re here to help students enhance and thrive in their educational journey, and so I say stop by. We’re here, we’re cool.”