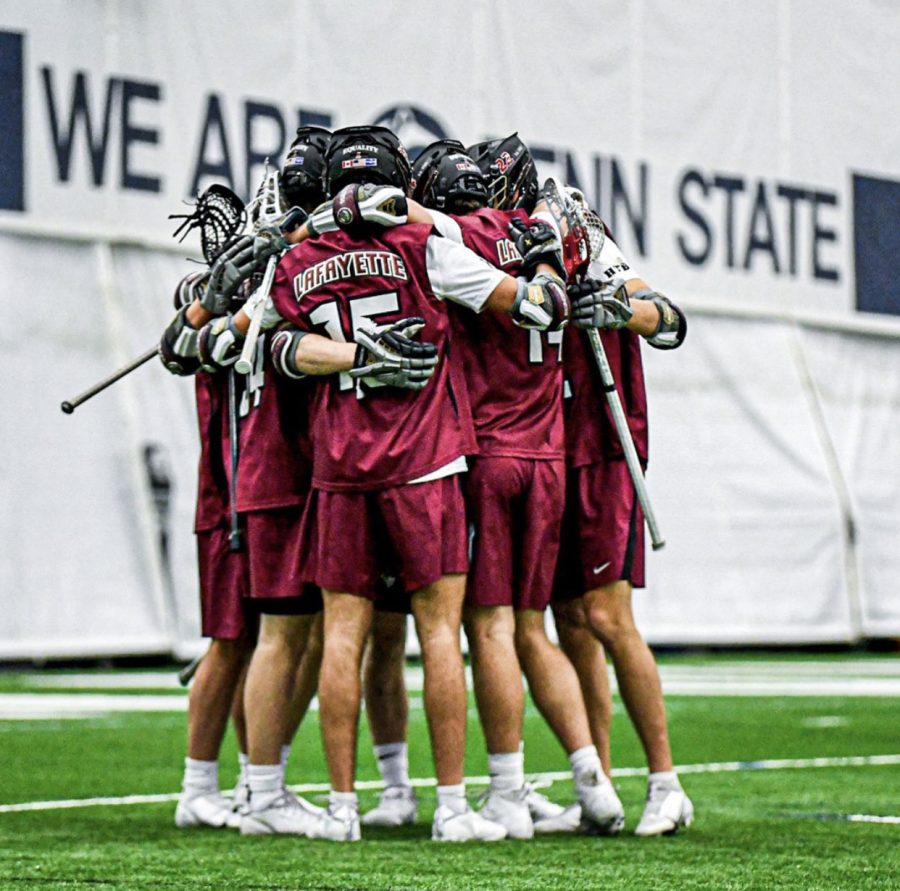 Lacrosse falls in an impressive showing on the road against Big Ten Penn State to begin their season. (Photo courtesy of men's lacrosse Instagram)

After nine months of preparation, the men’s lacrosse team officially opened its 2022 season against Penn State with a loss this past weekend. The game ended 20-15, with the Nittany Lions on top.

“After investing so much time and effort into the preparation, it was super exciting to have it all culminate in the form of this match,” freshman midfielder Jack Galbraith said. “The idea of ‘game day’ has always seemed so far away.”

Neither team had a problem finding the back of the net, with three goals being scored in the first minute of play. While Penn State was the first to open up scoring, Lafayette countered with back-to-back goals from sophomore midfielder John Mathes and junior defender Sean Rushton just 13 seconds apart.

Keeping in pace with the first few minutes of the outing, a total of five lead changes occurred throughout the match.

“Culturally, that’s what lacrosse is supposed to be. When my people invented the game, there really was no winner or loser. The game was designed for the entertainment of people,” freshman attacker Oneniotekowa Maracle, who hails from the Mohawk Nation of the Iroquois Confederacy, said.

The game was tied 6-6 after the first quarter, and Lafayette never trailed for the entirety of the second quarter.

Junior attacker Ryan Duncan led the way for the Leopards as he notched a hat trick in the first half, adding to his four goals total on the day. Sophomore attacker Peter Lehman was second on Lafayette’s leaderboards, netting three goals and an assist.

“Going into the game, we knew who we were playing. As a lacrosse player, Penn State is a team you grow up watching. You look up to the players who have donned the blue and white,” Galbraith said. “Once that halftime horn sounds and you’re up by one, you realize that they are flesh and blood.”

While the Leopards ended the first half in the lead, it was in the second half that Penn State secured the win. Lafayette added only three goals in the final 30 minutes, while the Nittany Lions scored nine.

“We’re still working out the kinks, and I think we lost our focus and control of the game in the second half. We have to learn to finish games, but we saw what this team is capable of. It’s there. This game was a reminder that everything is earned,” Galbraith said.

“We gave one of the best programs in the nation a run for their money,” Maracle said. “Penn State is a really good team, and I think we showed people that Lafayette is a good team, too. Obviously, we didn’t win, but we are keeping our heads held up high. At the end of the day, we played hard and had fun in the process.”

While the men’s lacrosse team hasn’t found the most success in recent years, scoring 15 goals against Penn State is sure to turn heads.

“This team isn’t used to scoring 15 goals on a Big Ten team. There are players who have been part of this team long enough to know how far the program has come…we didn’t care what name was written on their jerseys, only the one written on ours. We don’t celebrate losses, but it was definitely a step in the right direction,” Galbraith said. “One of the things Coach Myers has always taught us is that we aren’t going out to overwhelm an opponent with our talent, or our name. We overwhelm them with our culture.”

The Leopards will be back on the road to face off against Virginia Military Institute tomorrow at 12 p.m.

“This season isn’t different because we decided to make it so a couple weeks ago. This has been years of work in the making. We’ve earned the right to have a different season,” Galbraith said.