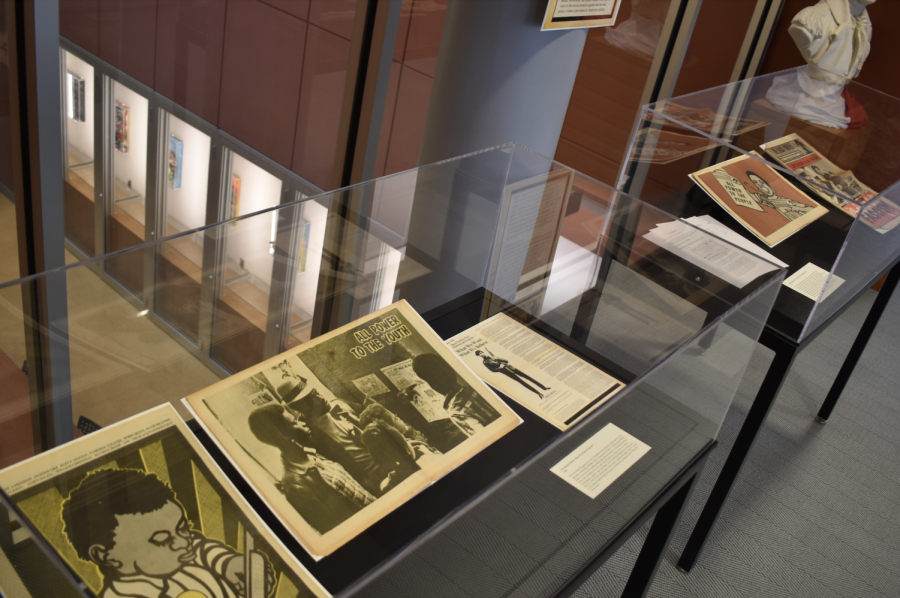 Special Collections is displaying newspapers by the Black Panther Party and the Black Manifesto by Lafayette's Association of Black Collegians. Both demanded change for Black citizens and students. (Photo by Emma Sylvester '25)

From afar, the newspapers preserved behind glass on the second floor of Skillman Library look just like the ones you might find in Farinon on a Friday morning. A closer look reveals that these pages hold a revolutionary call for change.

Right now in Special Collections, students can view newspapers that were created and distributed by the Black Panther Party in the 1960s. According to Africana Studies Professor Aaron Pride, the paper featured both local and nationwide articles about Black leadership, police brutality and the party’s community programs.

Also included in the display is the Black Manifesto, a list of concerns organized by Lafayette’s Association of Black Collegians (ABC) upon its formation in January 1969. The five demands outlined in the Black Manifesto were: 1) more Black students, 2) the formation of Black studies programs, 3) more Black faculty and administrators, 4) the formation of a Black House and 5) the end or neutralization of the effects of racism on campus.

“The Black Panther Party was mostly a youth movement, so it really captured a sort of ethos, particularly in higher education…that set the standard for college campuses across the nation, because they were contemporaries of younger people,” Pride said.

In the 1960s, ABC and other Black student groups were focused on establishing a curriculum for Black studies. Pride explained that now, the concern is more so with hiring Black faculty, which is another one of the demands outlined in the Black Manifesto.

As foundational as the Black Manifesto was, its five demands do not cover all the needs of contemporary Black students. According to Xavier Walker ‘22, it is also important that Black students are able to see their culture represented in academic spaces.

Last semester, Walker co-organized the Reading for Black Lives book drive with librarian Ana Ramirez Luhrs, which asked students, faculty and staff to donate books by Black and Indigenous People of Color (BIPOC) authors. In a project that is connected to the book drive, Walker is creating a curated display of book and movie recommendations offered by Black Lafayette students.

“The display isn’t for educational purposes, necessarily,” Walker said. “It’s so that Black students can see the things that they are interested in reflected in institutions such as the library.”

“We are also students at Lafayette. We are also Lafayette community members. Therefore, our history, our culture and our media productions should also be represented in this institution,” Walker said.

In curating the final list of books and movies that would be displayed, Walker was intentional about preserving the diversity of the recommendations.

“I think what happens a lot, specifically within Black literature, is that we only choose the same stuff from the 1920s to the 1980s…there’s a way that academia picks and chooses who to look at…There are things that are within the cultural canon that are not necessarily within the academic canon,” Walker said.

“Literature, film, music—these are all ways that Black people theorize and represent our lives,” Walker said.

Walker also created bookmarks depicting the full list of over 70 recommendations, most of which could not be included in the display because of space.

“Even though we couldn’t necessarily display everything, people will have access to the full list,” Walker said. “So if you want a new book to read or film to watch, that’ll be available for folks to look at.”

The display will go up sometime this month as a part of Black History Month. However, as Walker explained, “February isn’t the only month that we can talk about Black people,” so the display will stay up beyond this month.

“We need more student-selected stuff. It makes no sense to do a bunch of Black History Month events or Black History Month displays that no Black person is actually going to get,” Walker said. “I think that’s a way to cater to white people and make this month about educating them when really it should be about celebrating us.”