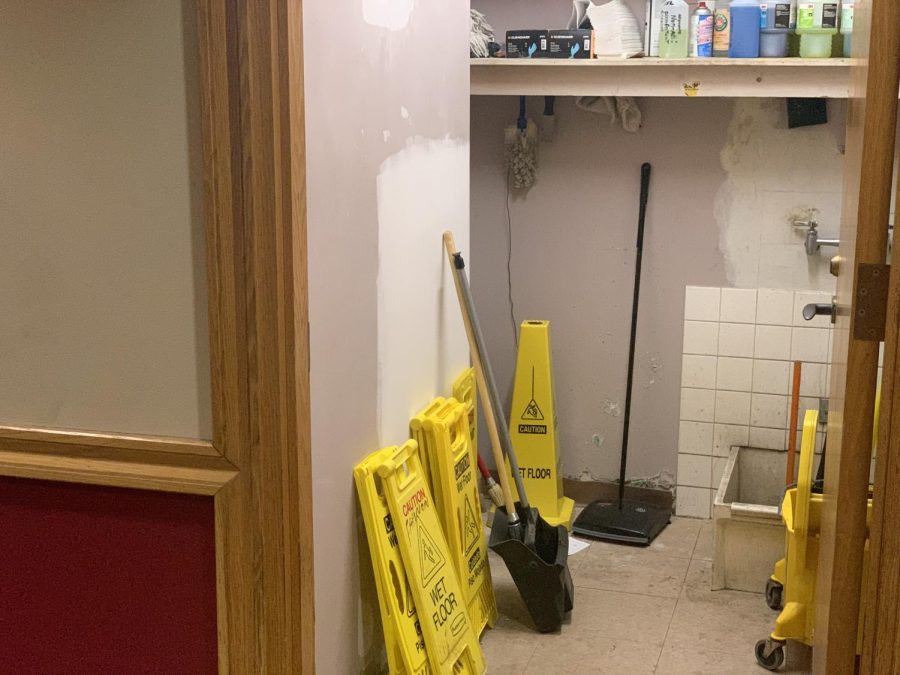 Lafayette custodians are finding themselves picking up more work than in previous years.(Photo by Trebor Maitin '24)

When Covid struck campus two years ago, college operations were radically altered, with employees leaving and universal pay cuts instituted. The custodians of Lafayette, some of whom have been under the college’s employ for upwards of ten years, lamented over the status of their jobs, having been asked to clean more buildings while losing benefits.

Tina Montijo, a custodian who typically works in Easton Hall, stated that her job has been “very stressful” due to the shrunken number of custodians.

“We have people that are returning and we have people who came to do the job that never showed back up,” Montijo said. “I know one girl was let go last year because she was undependable.”

Bob Zangl, standing beside his yellow cleaning cart, estimated that the custodial staff shrank from 70 to around 40.

Craig Becker, the vice president of Finance and Administration, could not pinpoint how many custodians have left the college since the pandemic began, but noted that vacant positions were outsourced to the New Jersey-based CSI Cleaning Service beginning in 2019. Becker went on to admit that CSI, too, has had staffing issues.

“The outside firm did very well in its first year or so, but starting in the fall [of 2021], particularly when we came back to campus, they had difficulty hiring,” Becker said. “The third party did have a lot of open positions.”

Scott Kennedy, director of Facilities Operations, wrote in an email that custodians are being hired “as needed.”

In addition to the uncertainty surrounding the quantity of custodial staff, the quality of the outsourced company has come into question, with the two factors leading to college-employed janitors cleaning more than one building, which is atypical, according to Zangl and Montijo.

“The deal was supposed to be that they [CSI] were going to take overnight shifts and we were just gonna do day shifts,” Zangl said. “They were supposed to have 20 or 25 people, but they only had eight or nine people.”

Zangl explained that some CSI custodians do not “show up” and sometimes run out of supplies, leading college-employed custodians to “do a lot of their work.”

Although Zangl only cleans the library–albeit by himself, despite two custodians doing the job in past years–Montijo has found herself cleaning three buildings.

“Technically, we’re supposed to be assigned to, like, one building, but I’m juggling between [Easton Hall] and Lerch right now,” Montijo said. “The one lady at Marquis who does only the second and third floors…she’s not here, so I’m juggling that, too.”

According to Kennedy, custodians’ work areas are based on total square footage, not buildings. According to Zangl, prior to Kennedy being hired in 2019, the policy was one building per janitor.

In addition to cleaning more buildings, custodians have also lost benefits since the pandemic began, including pay being cut and hits to their retirement funds.

“We lost money because of Covid and stuff,” Montijo said. “A lot of people said we were supposed to be getting money for Covid but we never received Covid pay.”

Zangl said that he heard “grumblings” concerning hazard pay due to Covid, but nothing ever came of it.

According to Kennedy, “there is no such thing as hazard pay.”

Zangl did say, however, that the wages lost during the pandemic were reimbursed in several “seven or eight hundred dollar checks,” and that his hourly rate has been restored, though he has not seen a raise in nearly three years. Before this, Zangl had yearly raises.

“Every year, every year you get them, and they were good raises,” Zangl said.

In addition to a lack of raises, custodial staff continue to have their pensions impacted by pandemic-era benefits slashing.

“The 401k that they froze…that, they didn’t do nothing with,” Zangl said.

Lafayette’s custodians are not without hope, however. Zangl noted a Tuesday meeting with President Nicole Hurd wherein the issue of raises was brought up.

“She said she’s taking it to the Board [of Trustees] and she’s gonna try to see what she can do for us about getting us a good raise to compensate for, like, the last couple years,” Zangl said.

Montijo, who marks her tenth year at Lafayette this March, is also optimistic.

“Hopefully with the new president, she seems really down to earth,” Montijo said. “Hopefully we get the people that we need and things go back to how they were when I first started here.”