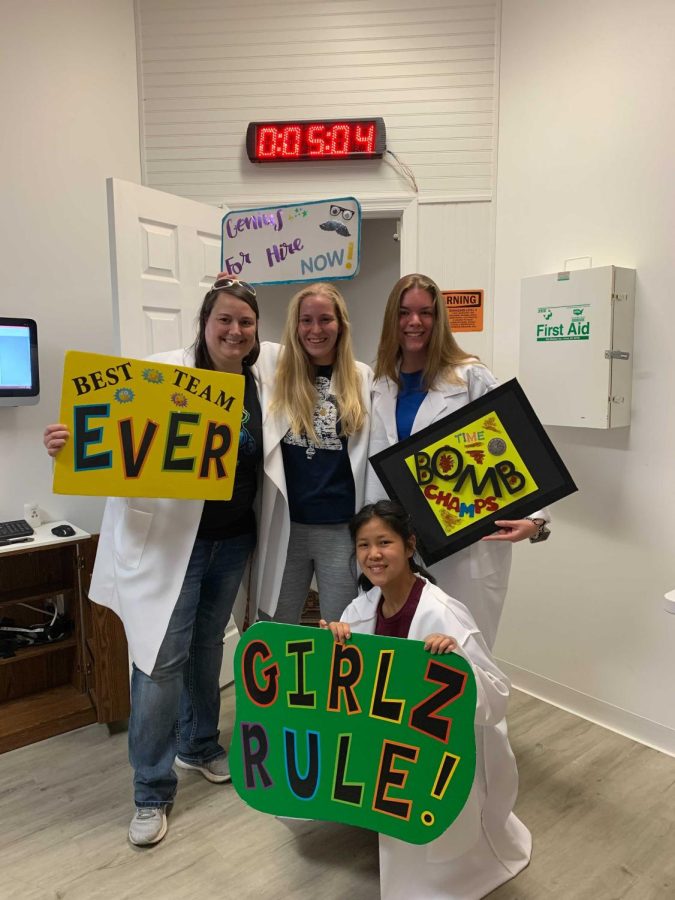 Professor Mensch and her student researchers have developed a strong connection both in and out of the lab. (Photo courtesy of Elizabeth Good '22)

Chemistry Professor Arielle Mensch and her team of three science-focused women are breaking down barriers in the male-dominated arena of STEM with research on prominent environmental issues.

Mensch started working at Lafayette in the fall of 2020. She began this particular study after accumulating knowledge from her experiences studying organic pollutants and nanoparticles in biological systems as an undergraduate student, Ph.D. student and postdoctoral researcher.

Mensch welcomed students to the lab last spring to take on parts of the project. She said she lets her students take the lead.

“They really are the hands in the lab that are doing the work,” Mensch said. “I help them get sorted, and then they run with their own independent projects.”

Chemistry major Elizabeth Good ‘22 was the first of the group to join Mensch’s research team last spring. Her section of research focuses on the interactions between nanoplastics and the veterinary antibiotic tylosin, which can make its way into the environment as a pollutant.

Conducting research under Mensch has helped Good solidify her future path into the scientific world. Instead of applying to chemistry programs for grad school as originally planned, she will instead be exploring the realm of environmental science.

“I was kind of nervous about getting into research at first. It felt like a very intimidating process, and she was just the best mentor to help me find my confidence,” Good said. “It definitely showed me that I’m very interested in the environmental side of chemistry. It feels very applicable to me, this research, talking about pollution and its effects on the environment.”

Similarly, for chemical engineering major Carie Feigeles ‘22, conducting research has greatly influenced her post-Lafayette plans. Feigeles’s research on the impact of microplastics in trout gill cells has served as a big talking piece through the process of applying to graduate programs.

“In every interview I’ve had so far, I’ve been able to talk about it for literally an hour,” Feigeles said.

Feigeles first joined Mensch’s team in the lab this summer, working alongside Good. Since then, Mensch has been a prominent figure throughout Feigeles’s time as a woman in science at Lafayette.

“She’s really been the person that’s always there,” Feigeles said. “It’s really great to have a professor that’s so willing to talk to you and so willing to help.”

This March, Good and Feigeles will be traveling to San Diego to present their respective research at the American Chemical Society Spring Conference.

Anna DiFelice ‘24, the youngest of the group, applied her major in chemical engineering to the lab for the first time this summer. Her research is centered on the ways in which organic matter such as leaves break down with microplastics and other particles. After taking time off from lab work last semester, DiFelice returned this spring with the hopes of writing a paper on her research in the future.

“I felt like I was missing out on some lab experience,” DiFelice said. “It’s also preparing me for the real world when I’m working for a team setting.”

For DiFelice, spending time with Mensch and her other teammates has been a very positive experience.

“When we have downtime, we might go to her office and just spend time talking. Research, I’d say, is definitely an aspect of academia as it is forming a connection with your professor,” DiFelice said.

Those sentiments are shared by Mensch, who values the relationship she has with her team and the work they do to progress the research.

“Having student researchers drive the work is really the highlight of my days,” Mensch said.

Through their time in the lab, DiFelice, Good and Feigeles have developed a friendship rooted in teamwork and shared love for science.

“We’re a very collaborative lab. We all have our own individual projects, but they all overlap in a way that we get to constantly talk and bounce ideas off of each other,” Feigeles said.

“I love working with the other students,” Good said. “They’re students I probably wouldn’t have met otherwise, but they’re my best friends now.”