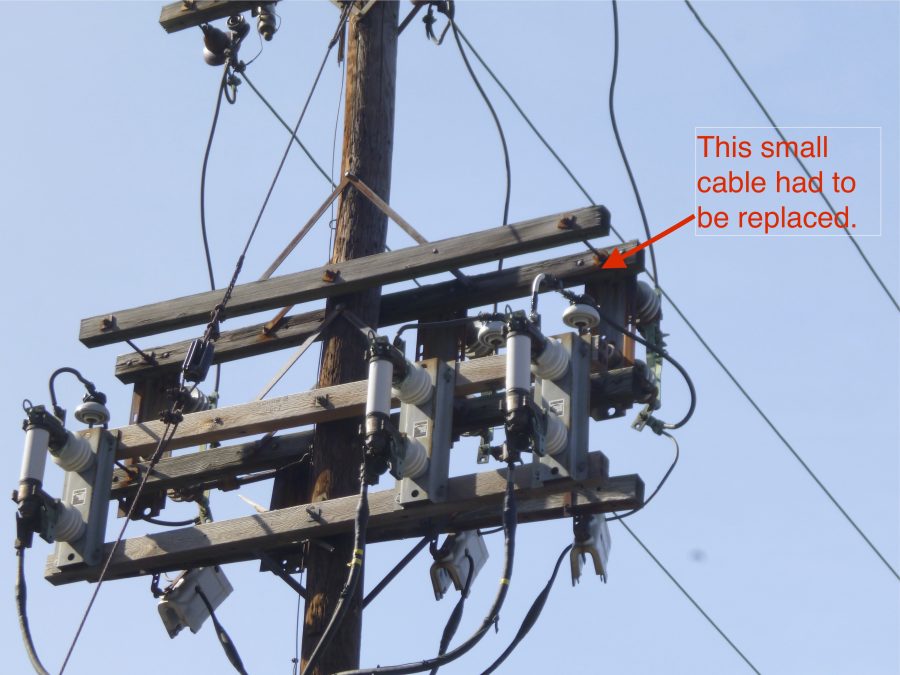 The power outage was caused by this small wire melting. Photo courtesy of Bruce Ferretti.

Peter Phelan ‘18 was on his way to meet up with friends around 7 p.m. last Sunday when parts of the campus lost power. Before he knew it, he was stuck in an elevator in Williams Art Center with his newly-bought trombone, waiting for the fire department to free him.

“I was able to get in, select a floor, and then the doors shut,” Phelan said. “It felt like it moved, and went back to the first floor.”

“I tried the ‘door open’ button, but that didn’t work,” he added.

Phelan was unaware that a circuit had malfunctioned at the college, causing a power outage in ten buildings across campus that lasted until around 1 a.m. Monday morning.

The reason for blackout, Ferretti wrote, was a small wire that overheated and melted. The wire is connected to a circuit that runs from the facilities operations parking lot to Pardee Hall and beyond, supplying power to the East side of the campus. When this small wire melted, it disconnected part of the circuit.

According to President Alison Byerly, the power outage was initially thought to be due to a problem with a transformer, an electrical device that transfers energy between two or more circuits.

“[Facilities operations] thought they would fix it in an hour or two, but it turned out there was also [a] cable near Acopian that had to be dug up and dealt with,” said Byerly, who remained in close contact with facilities operations throughout the night.

Ferretti wrote that facilities operations installed a new cable late Sunday night, and the problem was fixed in the early hours of the morning.

While facilities operations were working to identify the problem that caused the power outage, Phelan was documenting his experience being stuck in an elevator on the social media platform Snapchat.

“If you looked at my [Snapchat] story, there was definitely a selfie of me complaining about being trapped in an elevator posted about halfway through the event,” Phelan said. “If you didn’t take a selfie of something, did it really happen?” he said.

While Phelan was eventually able to update his Snapchat friends about his status, he initially did not have the cellphone service to call for help.

He said, though, that the elevator was well-lit enough for him to press an emergency button on a side panel. The button set off an alarm, and people outside of the elevator then contacted emergency services.

“The fire department came,” Phelan said. “There was a truck, lights, and the whole thing.” After around fifteen minutes, Phelan was rescued by officers who pried the elevator open.

According to Phelan, the elevator stalled when the generators kicked in to provide backup power Williams.

There are around five major generators around campus, Byerly said. But the school is looking to add more in the coming years.

“We can’t run the whole campus on generators, but we can run a decent amount of the campus for a short term,” Byerly said. “As we found out during Hurricane Sandy, you can’t go days and days without power.”