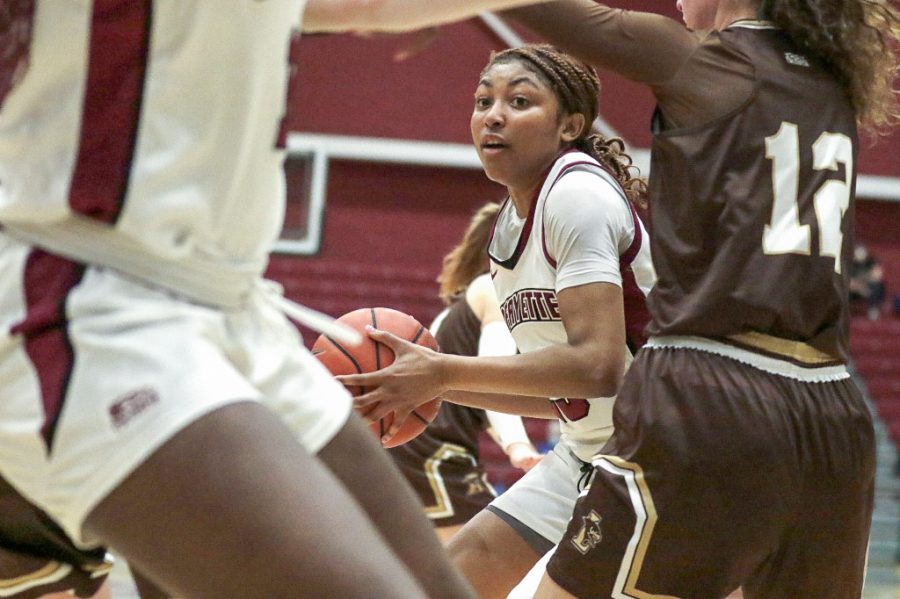 The Lafayette women’s basketball team aims to put up 40 minutes of solid offense and defense in their next game against Bucknell after they struggled to compete with Lehigh. (Photo courtesy of GoLeopards)

Senior forward Naomi Ganpo was a standout for the Leopards with a double-double, dropping 16 points on 8-13 shooting and grabbing 10 rebounds. These stats mark Ganpo’s career-high in points as she recorded her fourth double-double of the season.

Freshman guard Abby Antognoli was the only other Leopard to put up double figures with 13 points on the day, going 6-15 on shooting and adding six rebounds.

“We need to work on our responses to other teams’ runs by increasing both our offensive and defensive intensities,” Ganpo said.

Two minutes into the game, Ganpo drove to the lane and put up a layup to put the Maroon and White on the board and junior guard Jessica Booth followed that up with another field goal putting the Leopards up 4-2. Lehigh proceeded with a 5-0 run to make it 7-4.

Ganpo responded with a basket shortening the lead by two. Both teams continued to trade baskets, but Lafayette could not overcome the deficit and the Mountain Hawks closed the first quarter up 17-13.

Lafayette put in a layup to kick-off the second quarter, nearly closing the gap. Lehigh responded with a 7-0 run and Lafayette could never eclipse the Mountain Hawks’ lead after that. Antognoli managed to stop Lehigh’s run with a jumper, putting the score at 24-17. Lehigh embarked on another run, closing the half leading 34-22.

At the start of the third quarter, Booth and Antognoli each contributed to the Leopard’s run to diminish the Mountain Hawk’s lead to seven.

Ganpo and Lehigh traded buckets to put the score at 42-31. Before the close of the third quarter, freshman guard Claire Gallagher, Ganpo, and Antongoli dropped an additional eight points for the Maroon and White, despite being thoroughly outscored by Lehigh in this stretch. The Mountain Hawks closed the third with a decisive 56-39 lead.

While there were efforts from the Leopards to make a comeback in the fourth quarter, Lehigh never relinquished control. The game ended 76-52 in favor of the Mountain Hawks.

Ganpo shared the importance of limiting cold streaks throughout the course of a game.

“We need to find a way to put up 40 minutes of solid offensive and defensive presence. When we have short lapses, they are very much costly to the team. We cannot allow games to hang by a thread anymore,” Ganpo said.

With the League tournament approaching in less than a month, the Leopards must regroup. With a predominantly young squad, team leadership is key.

Ganpo shared the importance of a solid defensive identity in the league. When shots aren’t falling, it is the defensive presence on the floor that will keep the Leopards in games.

“The slumps will happen, but we need to improve on our defensive transition. This is something that is crucial to our defensive identity,” Ganpo said.

Tomorrow the Leopards will be at home to face Bucknell at 2 p.m. With five games remaining in the regular-season slate, the Leopards will look to finish strong and secure a slightly better seed as they head into the League tournament.