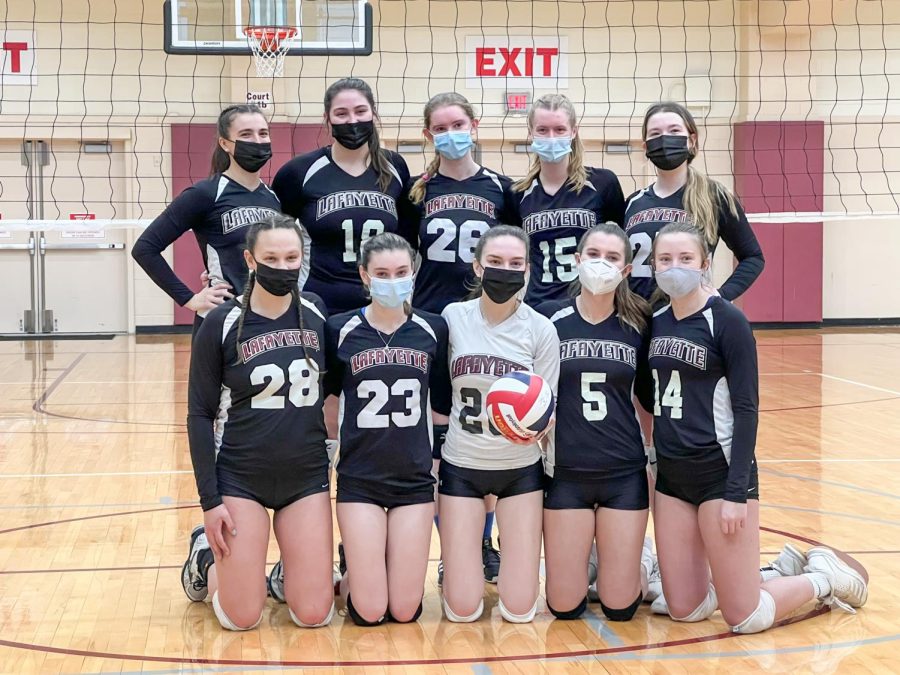 The Lafayette club volleyball team looks toward next tournament against Bloomsburg after coming in second place at home-hosted tournament. (Photo courtesy of Becca Abel '22)

Last weekend, the women’s club volleyball team was a finalist at a home tournament in the Kamine gym. The Leopards won all three games in pool play against Stevens Institute of Technology, the Rutgers B team and the Temple University B team.

Moving into playoffs, Lafayette beat Stevens again before losing to the Rutgers A team in the finals.

The Leopards lost to the Rutgers A team at their home tournament in December, so they knew going into the match that it would be a hard fight. Junior libero Theresa Chua was injured while snowboarding, so senior middle Nina Curko had to fill in her position.

Despite this switch, along with one player being in isolation for Covid, the team did not make an easy sweep for Rutgers.

“[Curko] going from a middle to a libero is a very difficult change. For her to be able to make the switch was really awesome,” senior outside hitter Becca Abel said. “I think everyone played really well with the change of lineup.”

The team prepared for the weekend with its routine six versus six scrimmaging during practice.

Abel has seen the team culture transform during her time at Lafayette. While the team used to only bring 10 players to each tournament, Abel said that at almost all four tournaments this year they have brought every player to compete.

“The girls are really dedicated,” Abel said. “There were times my sophomore and freshman year that only six people came to practice.”

And the future of the club looks promising, as it took 14 new players from tryouts in the fall.

“We have so many freshmen that I would be so nervous to be playing,” Abel said.” They just take it and run with it.”

The team doesn’t have a coach, so they rely on the executive board to manage practice plans and scheduled tournaments. Curko is the club’s president, and junior outside hitter Dolce Whitwell and sophomore defensive specialist Anna Paulsen round out the rest of the executive board as vice president and treasurer, respectively.

While Lafayette was unable to clinch the win, Abel was happy with the way the team performed.

“We played really cohesively. Our serve receive was good, our communication was good and our coverage was good,” Abel said. “Because we’re a smaller team, we often get blocked, and picking that stuff up is not always easy. Everyone was going for every ball, which is not something that you can always say.”

After the weekend, the team sits in fifth place in the region, and the top 11 teams will compete at regionals.

“We can’t let up and we can’t let ourselves get easy losses,” Abel said. “Every point matters to go to regionals.”

The team’s next tournament will be this weekend at Bloomsburg University. From there, they will compete in two more tournaments on the road until regionals on April 10.