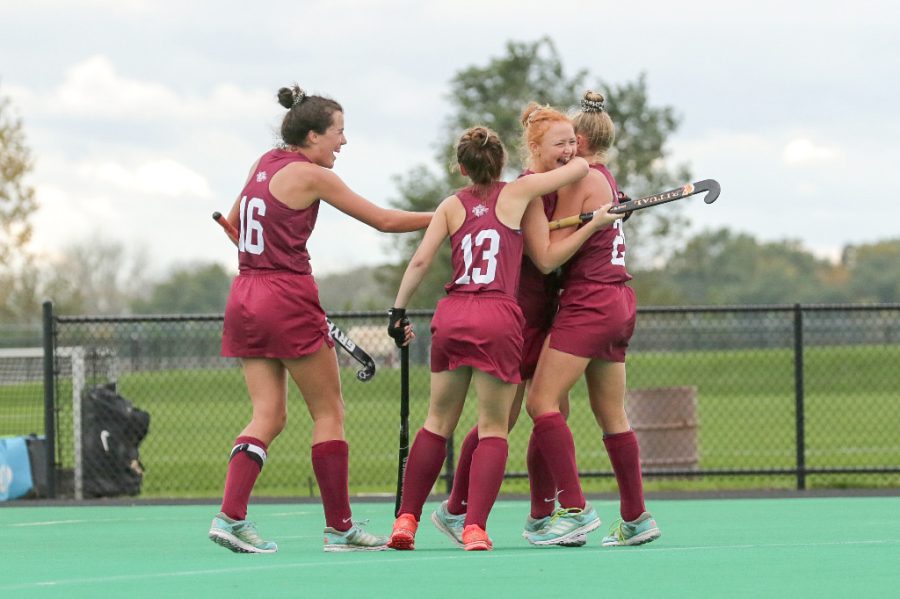 Several members of the Lafayette field hockey team who thrived both on the field and in the classroom were selected to receive awards for their efforts. (Photo courtesy of GoLeopards)

The Leopards joined over 1,370 field hockey players recognized for their academic excellence this past semester. Lafayette is one of the 80 institutions honored by the National Field Hockey Coaches Association (NFHCA) and awarded 14 Lafayette field hockey players for their academic achievements. Announced this past Tuesday, the players needed  a cumulative grade-point average of 3.3 or higher to receive the award.

NFHCA is a nonprofit organization that supports leadership in coaches and works to positively grow the field hockey community. Senior forward Alix Talkow’s academics translate to her leadership and positive mindset on the field.

“Academics apply to leadership by creating a well-rounded mindset and understanding of different topics,” Talkow wrote in an email. “The projects and activities done in a classroom setting also translate to sport and life by facilitating an environment working with people with all different skill sets and interests.”

“It is an honor to be named on the NFHCA National Academic Squad,” Hefting wrote in an email.

Hefting is an international affairs (IA) major, and her most challenging course last fall was Research Methods in IA.

“This class was high-paced and required a high participation level at all times. Additionally, it challenged me to create my own research proposal as clear and concise as possible,” Hefting wrote. “Even though it was stressful at times, it was eventually the most informative and useful class I have taken at Lafayette.”

Hefting’s study routine does not change in the rigor of field hockey season compared to out of season. Regardless of the schedule, Hefting finishes work as soon as she receives assignments.

“I think I am a good planner. I can time-manage everything pretty well in my head, so that helps me with distributing the right amount of time to my schoolwork,” Hefting wrote. “I also get a feeling of how much time to put in each class, so I know how to focus on the most time-consuming ones.”

This is not Talkow’s first time receiving an academic award, as she was named alongside Hannes as a member of the Patriot League’s academic All-League team last fall. Academics seem to translate to other areas of Talkow’s life, helping her engage and understand more about the world and fulfilling the NFHCA’s goals.

“I believe academics help set a foundation to be able to challenge the status quo,” Talkow wrote. “Learning is so important, and academics specifically have helped me explore new interesting topics.”

Next year, Talkow plans to work for UBS Investment Bank in their wealth management division.

“I am excited to begin this next step and apply the knowledge I have learned through academics and sport to a new setting,” Talkow wrote. “I believe there is a huge connection between sports and academics that will help me become successful after graduation.”