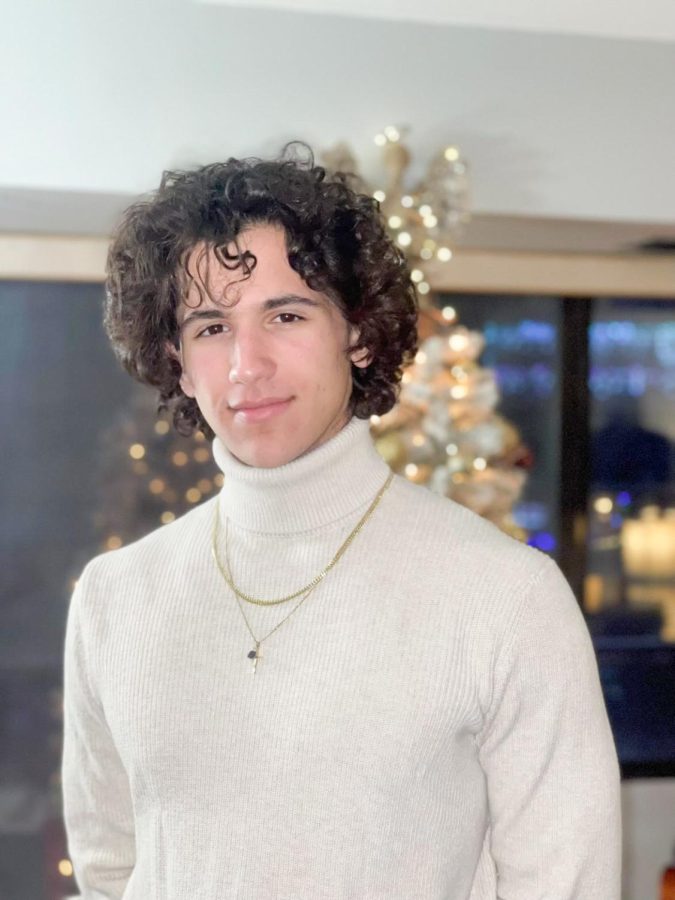 Will Shelton ‘23 drew from his experiences with Cuban culture when writing and producing his EP 'The Spanish Tapes.' (Photo courtesy of Will Shelton '23)

When Will Shelton ‘23 was in the first grade, he told his mother he was going to be a rock star. With the recent release of his EP “The Spanish Tapes,” he is one step closer to that dream.

Shelton’s music is a product of his upbringing. He takes inspiration from great storytellers like Marc Anthony, Celia Cruz, J. Cole and Childish Gambino, as well as from family.

“I grew up Cuban American; Union City [New Jersey] is a very Hispanic town. You walk the streets, you’re hearing salsa, bachata, merengue, all of these different [sounds], even Mexican boleros,” Shelton said. “That music was always around me, especially hip-hop and R&B. That’s what my dad listened to.”

Music has always been an essential part of Shelton’s life. He started picking up instruments in elementary school, writing music in middle school and releasing his work in high school. As a Creative and Performing Arts (CaPA) Scholar, Shelton has been able to continue this passion at Lafayette.

“I feel like everybody’s ear to a certain extent — definitely mine — wants to hear certain things. I try to make what I want to hear,” Shelton said.

His latest project was released last week on Friday, Feb. 11. The first song written for the EP, “Donde Quiero Estar,” which translates to “where I want to be,” encompasses the five-song album’s theme.

“To me, that whole project sounds like home. It sounds like family parties that were roasting pigs and dancing the salsa. It sounds like the slower Spanish ballads that I used to listen to with my grandmother,” Shelton said. “I think all of that project symbolizes where I want to be, especially now that I don’t get that a whole lot at Lafayette.”

The EP was written sporadically over the course of five months. After returning home from campus this winter, Shelton locked himself in his room for two weeks, concluding the project during the first week of February.

This project is rooted in his culture, something he came to appreciate while at home during the Covid pandemic.

“I started realizing the importance and the value of [culture], and just how much and to what magnitude it allows you to connect with other people and celebrate,” Shelton said.

Shelton hopes that his music brings a taste of his Cuban heritage to campus.

“I just want to create more opportunities for people to celebrate the culture here,” he said. “Whether or not they belong to the culture, I think that it’s just such a beautiful and important thing—and fun. If you do it right, it’s so much fun.”

In honor of the release of “The Spanish Tapes,” Shelton hosted a listening party in the WJRH basement. He opened the invitation to members of Spanish heritage and culture clubs on campus.

“I think live music is the best thing ever. I think that live music is an experience. I think that we’re really used to hearing music through any digital platform whenever we want to. If I want to hear a song, I put in my earbuds, click, it’s there,” Shelton said. “You can take all the videos you want, it’s not going to hit like it does when you were in-person, you know? I mean, it’s like trying to take a picture of the moon.”

While Shelton’s favorite song from the EP changes every day, the last song sticks out to him.

“’Me Recordarás!,’” the very last song, just sounds like a celebration. The subject matter is kind of sad, the title translates to ‘you’ll remember me,’ but the music itself explodes,” Shelton explained. “When you get to the beat switch and you have the drums come in and the crowd of people singing that refrain, it just sounds like a celebration. It sounds huge. That is a musical moment that I will forever be proud of.”

As a music major and Spanish minor, Shelton cannot see a future without music in it.

“This will always be something that I do for myself. It keeps me happy. This keeps me going,” he said.

Shelton’s music can be streamed on Soundcloud. A link to streaming options can be found on his Instagram page, @william_raymond_.

“Go stream ‘The Spanish Tapes,’ and dance to it,” Shelton said. “Have a good time.”

Correction 2/24/22: Shelton’s music can only be streamed on Soundcloud.