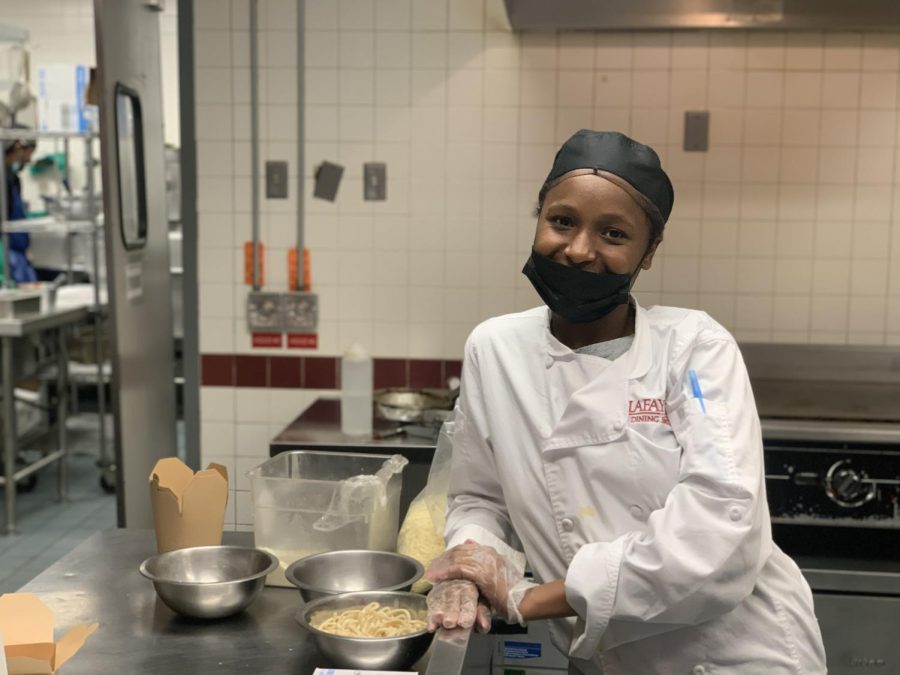 Jada Peters '24 is a student employed by dining services. (Photo by Trebor Maitin '24 for The Lafayette)

Lafayette’s dining halls are not immune to the staffing shortages hitting minimum wage workplaces throughout the country.

During the fall semester, community members voiced concerns about understaffed dining halls and overworked employees as a result of the Covid pandemic. The Instagram account @paylafdining first posted in late Oct. 2021, and advocated for higher pay levels for employees, citing their unlivable wages. Students have also noted overcrowding in dining halls, causing long lines all over campus.

Christopher Brown, general manager of Bon Appetit, the college’s primary dining and catering operation on campus, said that the labor shortage is not exclusive to Lafayette and goes further than simply the number of employees the college has.

“Not only at Lafayette dining, but in drivers that are bringing food to our campus—it has affected the market of our food purveyors having workers,” Brown said. “It’s a global labor shortage that’s impacting a lot of the pieces of the puzzle.”

Recently, Gilbert’s Cafe, a popular on-campus lunch spot, was closed for two consecutive days, Feb. 5 and 6. While students were notified of the closure through the mobile order app affiliated with Lafayette dining, no concrete reasoning was provided. According to Brown, the reason for the closure was an interruption of service that was a non-critical standard operating procedure. Although he noted that it was coupled with both supply chain issues and staffing shortages, he did not further elaborate on the specific causes of the shutdown.

Craig Becker, who serves as the associate vice president of Lafayette’s Finance and Business Services, agreed that the issues the college is facing are affecting the entire nation. He stated that there was one week where a delivery did not arrive because of a lack of truck drivers, in addition to other shortage issues such as vendors being unable to meet their schedules.

Becker estimated that the dining hall staff was about 80-90 employees short at the start of the year, which led to a salary increase in an attempt to boost numbers. Brown stated that there had been two notable salary increases prior to the fall semester, one in Jan. 2021, and another in Aug. 2021. Both of these increases occurred before the Instagram account was started.

In terms of employees having a strained workload, Brown stated that while Bon Appetit does not specifically control employee schedules, there are standard rules for the company to avoid overtime, including sticking to a 40-hour workweek and enforcing caps on the amount of overtime allowed.

Becker stated that there have been work shortages that have resulted in higher workloads for employees.

“We’ve had shortages in facilities you know, with staff sickness,” Becker said. “We’ve had some staff leave because of rising salaries elsewhere. So staff has been challenged working overtime.”

Staffing shortages also caused issues with janitorial staff, with the number of custodians on campus dropping. According to Becker, in the fiscal year of 2019, the college outsourced some custodial positions to a third party that did well in their first year but reached complications later.

“Starting in the fall, particularly when we came back to campus they had difficulty hiring,” Becker said.

Becker added that employees are not always motivated by their salary when deciding to work for Lafayette.

“But often when someone comes to work for a college…they’re in part coming to the institution because they believe in its mission, so they make sacrifices to do so,” Becker said.

Given that the college is either meeting or exceeding the wages for institutional dining in the region, Brown did not foresee wage increases in the near future.

A Facebook job posting from the Lafayette College Dining Services account offers employees a $175 signing bonus for positions like dishwasher and sous chef. While salaries are not listed for some positions, wages listed for positions such as cooks, supervisors, cashiers and attendants vary from $12 to $17 an hour, including a variety of benefits.

A note from Dining Services posted online on September 13, 2021, stated that “dining is aggressively hiring to fill our open positions across campus and at the Trolley Stop.”

According to Glassdoor, an employment review website, the average base pay for a dining hall worker is $11 an hour, however, that does not necessarily account for varying types of positions.

After gathering data from colleagues at comparable institutions, Brown said that Lafayette was better positioned than these other colleges or universities throughout the fall. He pointed to limited closures, namely shutting down Simon’s Cafe and shrinking hours slightly in the Eco Cafe and Skillman Cafe while being able to open all venues without closing stations or buying prepackaged food campus-wide. Furthermore, Brown mentioned the success in opening an entirely new venue mid-pandemic, The Trolley Stop, which began serving students in spring 2021.

College Business Director Greg Scofield, an administrator of the contract with Bon Appetit, applauded the work that they have done, going above and beyond throughout the pandemic to keep venues open, recruit new employees and continue to serve students.