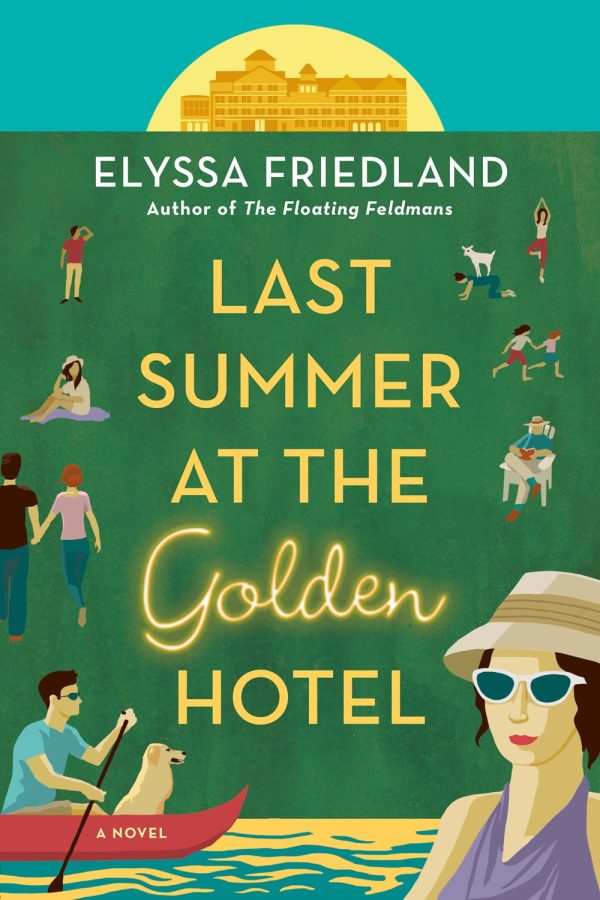 'Last Summer at the Golden Hotel' tells the story of two families deciding whether or not to sell their hotel and the drama that ensues. (Photo courtesy of Goodreads)

In the throes of a frigid winter, Elyssa Friedland’s “Last Summer at the Golden Hotel” conjures nostalgic images of lounging by the pool, running through hotel halls and making memories with family and friends in the summer heat. With an added dose of family drama, “Last Summer” provides an escape from the dreary cold into the world of the Catskills.

The Golden Hotel is the last of its kind. Once a magnificent, sprawling presence in the Catskills with a mile-long waiting list and crowded dining rooms, the hotel, now in desperate need of repairs, is barely staying above water. It has outlasted its competitors thanks to the tireless work of co-owners Amos Weingold and Benny Goldman, life-long best friends and the patriarchs of their respective families, but has lost its signature sparkle after the increasing variety of vacation options across the world has taken clientele elsewhere.

Brian Weingold, the underachieving son who now manages the hotel, receives a lucrative offer for the purchase of the hotel. Both families are equal owners in the business, so three generations flock back to the Golden for one last summer to decide the fate of the hotel: should they sell, closing the door on the decades-long venture and the memories that go with it, or try to keep the business afloat?

As the group attempts to decide, years of secrets emerge, threatening the relationships both within and between the two families. Simultaneously, the possibility of romance arises, loading the book with enough drama to fill a soap opera.

Throughout the book, the characters gravitate toward different choices regarding the fate of the hotel; they seem intent to sell or keep the hotel before something changes their minds. Even to the end, the fateful decision hangs in the balance with readers unsure of which side each character will fall. Friedland excels at revealing just enough information to keep the reader enticed while keeping the final resolution a mystery.

Another thread weaves throughout the book: the idea that it is never too late to become who you want to be. Characters in their forties and fifties question their careers and places in the world, confront issues haunting them from their pasts, rekindle old relationships and discover new ones. Even the oldest generation is still learning and growing as they come to terms with their new roles in their changing families and world.

Friedland depicts the complex relationship between different generations with stunning accuracy. The novel sees children understanding their parents more as they grow, realizing the ways in which they have failed them and are just like them. Grandparents do not understand the attitudes and interests of their grandchildren, and they argue about the ways in which the traditions of the old world can exist in the new world. Underneath all of this disagreement and resentment is a deep love and admiration that permeates all of their actions.

At times, the members of the ensemble cast appear to be caricatures of their generations; the grandchildren are phone-obsessed, narcissistic influencers, the parents are straight-laced with tunnel vision for their families and careers and the grandparents are stubborn, stuck in their ways and absolutely abhor any type of change. This depiction induced a few eye rolls; Gen Z does not actually do goat yoga.

Additionally, aspects of the ending were rushed and incomplete. With so much of the story culminating in the decision to sell or maintain the hotel, the aftermath of the decision deserved more dedicated time and a deeper explanation.

Overall, “Last Summer at the Golden Hotel” combines wittiness with warmth as characters grow apart, find their way back together and learn more about themselves and each other.