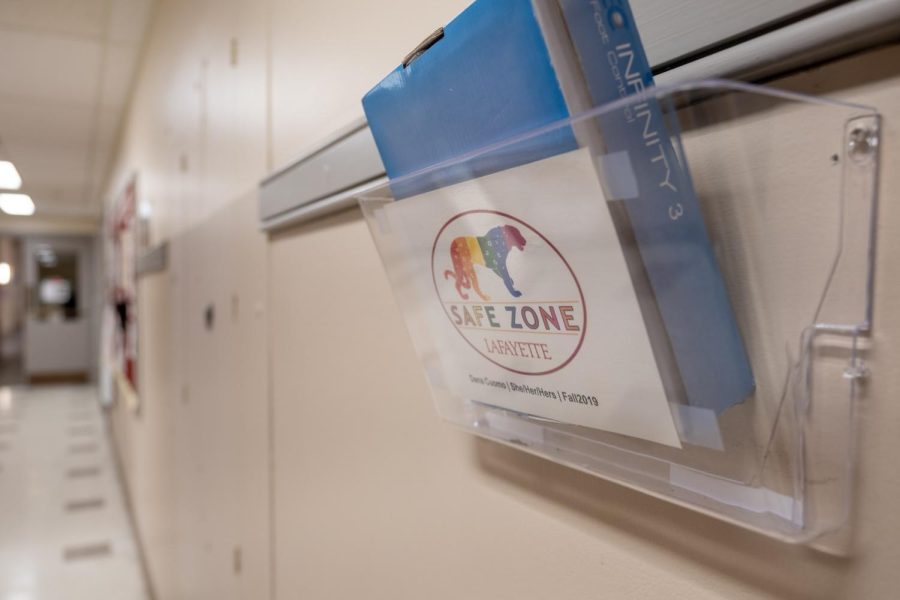 Individuals and groups can request Safe Zone training, which takes place over four fifty-minute sessions. (Photo by Caroline Burns ’22 for The Lafayette)

It is likely that most students will experience someone coming out to them at some point in their lives. Knowing what to say may seem easy, but offering the right support while avoiding microaggressions can be more difficult than it seems.

The college’s Safe Zone trainings provide a way to learn how to do just that.

Safe Zone programs have existed in higher education around the country since the 1980s, according to Tommy Lee, assistant director of intercultural development for gender and sexuality programs. He explained that Lafayette established its own official Safe Zone program at an institutional level around 2012, but student groups such as Quest had some programming before that.

Upon coming to the college in July 2021, Lee found that Safe Zone program was aging. He has since worked on updating the program, making it more inclusive of all identities within the LGBTQIA+ acronym. This new curriculum is now in place.

One change to the program is that it now consists of four 50-minute sessions as opposed to one two-hour training. The first session is on sexual orientation, focusing predominantly on lesbian, gay and bisexual students. The second is on gender identity, looking at transgender and nonbinary students. The third session revolves around allyship and inclusion, and the fourth is on tangible steps that can be taken to create safe spaces.

“For a group, that might be changing the language we use…changing some of our policies, really thinking more about putting the responsibility on the group to take this information and strategize on what to do with it,” Lee said.

Lee said that he lengthened the program in order to slow it down, see what the identities mean, and add more interactive elements too so it is more comparable to a dialogue than a lecture.

Almost 200 people have signed up for Safe Zone training this semester so far. Lafayette students, faculty and staff can sign up on an individual basis or request training for a group. Lee said that many new employees of the college have signed up along with student groups such as sororities, fraternities and athletic teams.

The chemistry department was one group that recently requested a group training.

The college’s library staff also requested an upcoming training for this semester. Anne Houston, dean of libraries, explained that the staff expressed interest as they thought it would be useful as they implemented the library’s new Diversity, Equity and Inclusion plan.

“I think the dual education/allyship approach to the new Safe Zone curriculum will be appreciated by the staff, as we all have varying knowledge of and experience with LGBTQIA+ identities and allyship,” research librarian Ana Ramirez Luhrs wrote in an email.

Lee takes time to tailor the curriculum for specific groups, so Safe Zone training for a sports team will look different than training an academic department, for instance. Lee explained that ideally, the training should be in-person, and he frequently travels to organizations’ spaces to do the sessions in places like fraternity houses and locker rooms.

For groups that feel that four sessions are too much, Lee explained that the program can be tailored to something shorter that might not share the same name.

In the future, Lee said he would like to have the trainings done by peer educators, like the program has been done previously, in order to allow student groups to feel more comfortable and perhaps even learn better.

In the past, when Lafayette community members completed the Safe Zone training, they received a sticker to put on their door, indicating that they had finished the training. Lee said that in another change to the program he is making, people completing the program will no longer receive a sticker or certificate of completion.

“If you look back ten years ago, [giving out stickers made] a lot of sense…the climate was dramatically different even just a decade ago. And it was almost like you were in the minority to really take the effort to really go through and get trained,” Lee said, adding that stickers meant students could typically go speak to the employee and feel comfortable.

However, Lee said that because of today’s climate and increased pressure to receive the training, he sees the training as not as special as it once was. He added that many stickers he sees around campus look old and faded since there is no date or renewal requirement on the stickers.

“I would never ever want a student to go to somebody who they think is a resource because they have a sticker on their door and not get an affirming or supportive response,” Lee said. “I would much rather have them go through the professional resources that are available, whether that’s myself or the counseling center or other professionals on campus.”

Furthermore, Lee said that the purpose of the training should not be receiving a sticker.

“I think your actions are way more meaningful and illustrate that you’ve done the training than a sticker ever would,” Lee said.