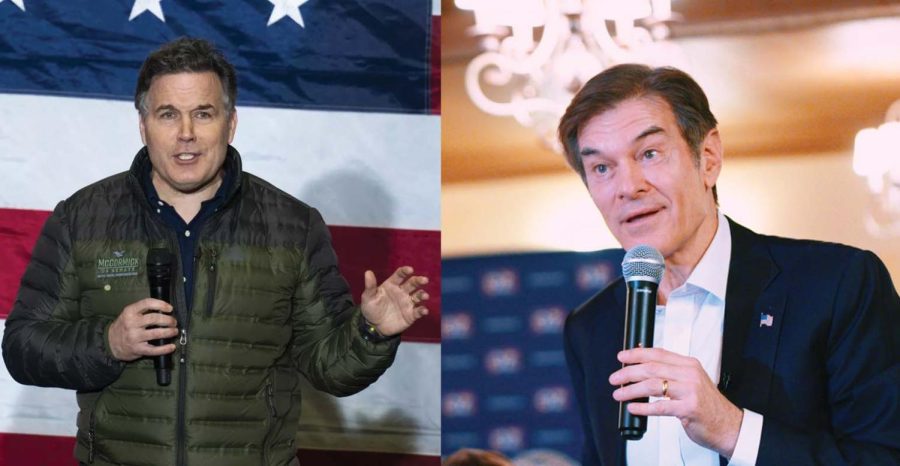 David McCormick (left) and Mehmet Oz (right) are two Senate candidates for Pennsylvania who have not resided in the state for a number of years. (Photo courtesy of Mehmet Oz and Getty Images)

On May 17, eligible voters will cast their ballots for the Pennsylvania U.S. Senate primary elections, narrowing down the slew of Democratic and Republican candidates to two contenders. Celebrities and political newcomers–Dr. Mehmet Oz and hedge fund manager David McCormick–are two of 16 Republicans vying for the Republican nomination.

The elections in Pennsylvania have critical importance for the United States Senate, which is presently divided 50-50. Republican Pat Toomey’s retirement gives Democrats the chance to gain a majority in the Senate should they win the elections; Republicans are desperate to hold the seat. If the Democrats successfully capture the seat, both of Pennsylvania’s senate seats will be held by Democrats.

Mehmet Oz is a well-known former television personality who hosted a daytime talk show about medical health that aired from 2009 to early 2022. David McCormick is a lauded Gulf War veteran and Chief Executive Officer at the investment management firm Bridgewater Associates. However, many raise concerns that celebrities in principle are not fit to hold public office. Both are political “outsiders” with little to no prior experience in politics and are celebrities in their own right. McCormick and Oz may be the latest celebrity hopefuls in a U.S. political phenomenon started by Donald Trump’s success as a businessman and reality television star turned political figure.

“To me, when I see a celebrity running for public office, it’s dangerous because they’re used to playing a character,” Kait Ahern ‘23, a member of the Lafayette Democrats club said. “They’re how best to represent the people and they don’t always know the Constitution, which is integral to hold federal office. When they have no experience and no knowledge in the field, we shouldn’t just hand them over unfettered power.”

“Celebrities running for office is not new, and celebrities are not necessarily incompetent,” Government and Law Professor Kincaid said. “Arnold Schwarzenegger served as governor of California from 2003 to 2011. SNL comedian Al Franken and ‘Law and Order’ star Fred Thompson served in the U.S. Senate.”

McCormick and Oz’s lack of political experience is not the only point of concern in their candidacies. The U.S. Constitution mandates that any citizen running for the Senate must be a resident of the state at the time of the election. Neither McCormick nor Oz are longtime residents of Pennsylvania. McCormick lived in Pennsylvania until he attended college, then moved in and out of state at various points, ultimately settling in Connecticut with his family. Notably, he moved back to Pennsylvania in 2022 in time to announce his candidacy.

Oz was born in Delaware, and though he attended the University of Pennsylvania, has lived in New Jersey for the majority of his life and continues to reside there. He is using his in-law’s address in Bryn Athyn, Pennsylvania to legitimize his candidacy in Pennsylvania. McCormick’s, but especially Oz’s, feeble roots in Pennsylvania put into question whether they will be able to adequately understand and prioritize the needs of their Pennsylvanian constituents, and thus, if they are running primarily for political gain.

“Oz is running in Pennsylvania because there’s no open seat in his home state of New Jersey. Being a Republican, he couldn’t win in New Jersey anyway,” Kincaid said. “As the great Tammany Hall leader George Washington Plunkett once said,  ‘I seen my opportunities and I took ‘em.’ Oz sees an opportunity and is taking it.”

Both Oz and McCormick are emphasizing their ties to Pennsylvania and using tactics to appeal to Trump’s fanbase. In one ad, Oz is seen pointing at unused smokestacks in a Bethlehem Steel plant, criticizing the “loss of Pennsylvania jobs.” McCormick used the popular pro-Trump slogan “Let’s Go Brandon” in a Super Bowl advertisement, a move targeted to garner Trump supporters’ votes.

As the date of the Pennsylvania primaries draws nearer, both candidates continue to sympathize with Pennsylvania voters and utilize tactics that were coined by Trump, hoping to secure their slot in the general elections on Nov. 8, 2022.