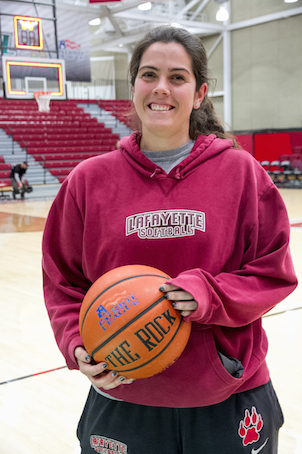 RR: That half court shot you made was incredible. Tell me about it.

RR: So your teammates were all there? Did that add to the moment, having them there?

AB: Yeah, a lot of them were. They were so excited and when I was walking off the court they all ran over.

RR: Did they happen to videotape it?

AB: It’s everywhere. My family sent it to everyone. I was a part of so many group texts. I went home a week ago to coach my sister and stopped by my grandparents. That’s all my grandpa could talk about. We would change the conversation and then all of sudden he would be like, “So did you know it was going to go in?’’ Grandpa, we’re talking about something else now.

RR: Walk me through the entire process. What were you thinking as you made the shot?

AB: Well I had been practicing I guess. For the past years I’ve been here I’ve been getting ready, because I’ve always said I’m going to take it eventually. I realized this was the last opportunity I had since it was the last home game that I was going to be a student here. Apparently, I was the only one [who signed up to do it]… Going out there you don’t realized how bright those lights are. I underestimated how bright the lights were going to be.

RR: Do you have any experience playing basketball?

AB: I played in high school. If we have an off day, I will go and play with my teammates [here], just goofing around. I would just take a few [half court] shots before we played.

RR: How successful were you in practice?

AB: Sometimes it took me a few tries, eventually I would usually get it. Eventually.

RR: When you made it on the first try, were you expecting that?

AB: When I first let go of it I thought it wasn’t going to even hit the rim. I was thinking, “This is going to be so embarrassing.”

AB: I’m trying not to spend it as much as I can.

RR: So you are the second student I’ve seen make the shot this year.

AB: My coach actually told me that I was the first girl to ever make it. I thought that was pretty cool. I think I’ve seen one person make it my four years here. I think it was [Stephen] Bezer.

AB: It’s been a lot of fun. We had our games this past weekend canceled. We were supposed to have five in Maryland, but we are playing three new games this weekend. Two against Wagner and one against St. Joe’s. Everyone was pretty bummed that we didn’t have those games but it’s exciting that we’re going to have more games rescheduled. Right now we’re 4-5 [Editor’s note: The team was 4-6 at press time].

RR: What does having those games adding in mean to the team?

RR: What positions do you play for the team?

AB: I play mostly first [base] and right field, which are very different. I started playing right my sophomore year. I love both and am excited that I get to play both.

RR: What’s your favorite thing about playing them?

AB: I like that at first base you’re so close to all of it. At first people are always throwing me the ball, so I get to be involved a lot. But in right field you have the change to run down the ball and make a diving catch that looks awesome and feels awesome because it’s so much fun.

RR: How has the first part of the season lived up to your expectations?

AB: It’s going the way that we have been working towards this year. This year has been completely different from the past three years. Everyone has been so focused and buying in to every workout, taking every rep seriously. It’s been really great to see the improvements we’ve made. Everything is more positive than it’s been in the past.

RR: What are your personal and team goals for the season?

AB: Personally, I just want to be the best teammate that I can, just play whatever role I’m given in a game. Whether it’s I’m at first or I’m in the dugout cheering on my teammates. As a team we really want to make Patriot League playoffs because that is still something that I haven’t done yet to make it there, and, of course, we want to win the Patriot League. That’s the goal. I think we have a good chance so I’m excited.

RR: What’s the funniest thing a teammate has ever said to you?

AB: I was playing first base and there was a foul ball hit that was way out. There’s this teddy bear that I bring with me on trips, who’s name is Bear, and then I hear one of my teammates yell from the dugout, “Bear would have caught that’’ in the middle of the game.

RR: Who is your favorite athlete?

AB: When I was younger, Mia Hamm was the first female athlete that I really knew about. I really looked up to her. My number always has nine in it because she was what I thought was the epitome of the great athlete. I liked her a lot.

RR: What is your favorite TV show?

AB: “Dexter” is probably my favorite TV show. Sad it’s over. They ruined the last season, I believe. Very strong feelings about that.

RR: What is you favorite song?

AB: My favorite song is ‘’She Will Be Loved’’ by Maroon 5, but I like a lot of different bands. I like Taylor Swift and One Direction and all of them, Pan!c at the Disco, too.

RR: Would you call yourself a Directioner?

AB: Yeah I think so. I had one of their posters hanging in my room and when Zayn left the band I cut his face out because I was so mad.

RR: What is your favorite food?

AB: I love eggs and chocolate chip cookies. They are my two favorites. I’ve been trying to think of a way to put them together, but there’s really not a good option.

RR: If someone were to play you in a movie about your life, who would it be?

AB: I’ve never thought about having a biography about my life. I would hire myself to play me.

RR: Do you have a favorite quote?

AB: I can play ukulele and piano. I participated in board game competition when I was in middle school. It was the game Blokus. I didn’t win but I haven’t lost since, I think. I really hate Twizzlers.