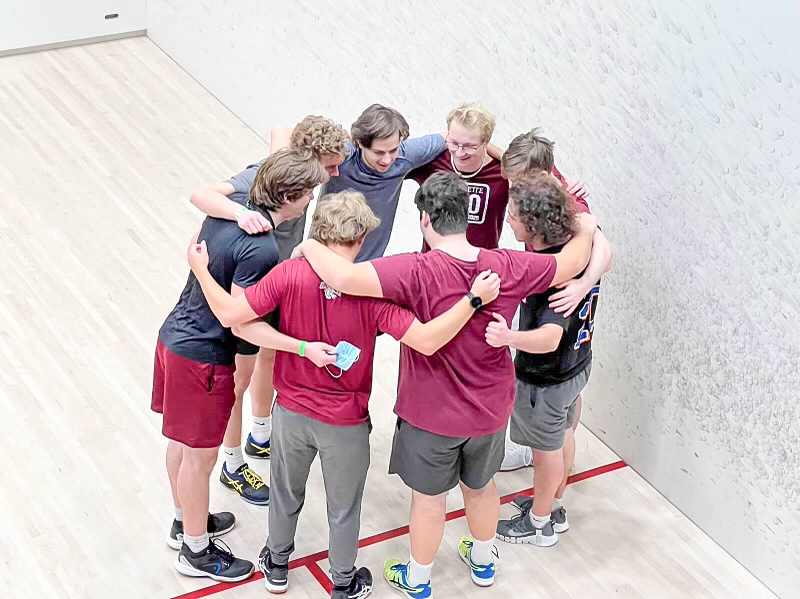 The club squash team huddles together before a match at the CSA National Collegiate Club Team Championship. (Photo courtesy of Jack Burton '22)

This past weekend, the Lafayette club squash team placed 58th out of 100 in the College Squash Association (CSA) men and co-ed club team standings and 24th of 27 club teams that participated in the CSA National Collegiate Club Team Championship in Philadelphia.

The club squash team has experienced a fluctuating rebuild over the past few years. Burton said that the club was not very active his freshman year, but became more organized during his sophomore year as they organized tournaments and went to nationals. Students being sent home during his junior year halted that progress.

“This year has been just trying to get back to normal,” Burton said. “There’s been a lot of messy stuff with getting tournaments because every school has different requirements and whatnot.”

He explained that he got into squash because his parents introduced it to him when he was young. After high school, he decided to help run the club team at Lafayette.

Junior Jacob Porter is Burton’s co-captain. Junior Avery Warmack is the club’s president, junior Erica Chen is the vice president and sophomore Julie Schramm is the treasurer. The executive board has discussed adding a social media manager role in the future to create an Instagram page to help get the word out about the club.

To qualify for nationals, the CSA required that each participating team had six matches against at least four different teams.

“For us personally, we played one match last semester against Lehigh at home. We also went up to Bard College for a day trip and played Vassar, Swarthmore and Colgate. Then this semester, earlier in February, we drove down to the Naval Academy and played Navy’s club team and then Johns Hopkins,” Burton said.

At nationals this past Saturday, Lafayette first played Xavier University and won 7-2. Lafayette then competed against rival Lehigh and lost 1-8. This loss placed Lafayette into a consolidation bracket.

The Leopards went on to lose to the University of Notre Dame on Sunday 9-0 before a 5-4 loss to Kenyon College.

The team as a whole did not perform as well at nationals as they expected, according to Burton.

“Technically, we underperformed our seed because we were seeded in seventh of eleven teams in our division and we ended up getting eighth,” Burton said. “However, because of how busy people were this weekend we were only able to have eight players participate. This hurt us because we automatically had to drop a match every single time.”

The team usually meets at the squash courts in Kirby twice a week for “structured practice” with their coach, Eric Boyer, but sometimes people go to play with friends. The club averages about 15 participants, but only some members compete.

“Some people just show up and play for fun,” Burton said. “We’re not too strict of a club. Obviously, we want people to show up and get better, but we understand that everyone’s pretty busy.”

Members usually attend the tournaments on a volunteer basis, according to Burton. They send out a message in the group chat about the tournament and see who wants to participate.

“Right now, a vast majority of the team is freshmen,” Burton said. “We had a big number of people graduate and then other cases of people transferring, but then we got a huge number of freshmen this past year. The future of the team is probably going to be a lot of them.”

Burton aims to use his final season at Lafayette to better the club.

“I think I’m going to try and use the rest of my time here to teach the freshmen how to do everything so they can start setting up even more tournaments and round-robin events against other teams,” he said.

Nationals was the last thing the team had on their schedule, but Burton said they may plan some “one-off matches” against Lehigh or Swarthmore before the semester ends.