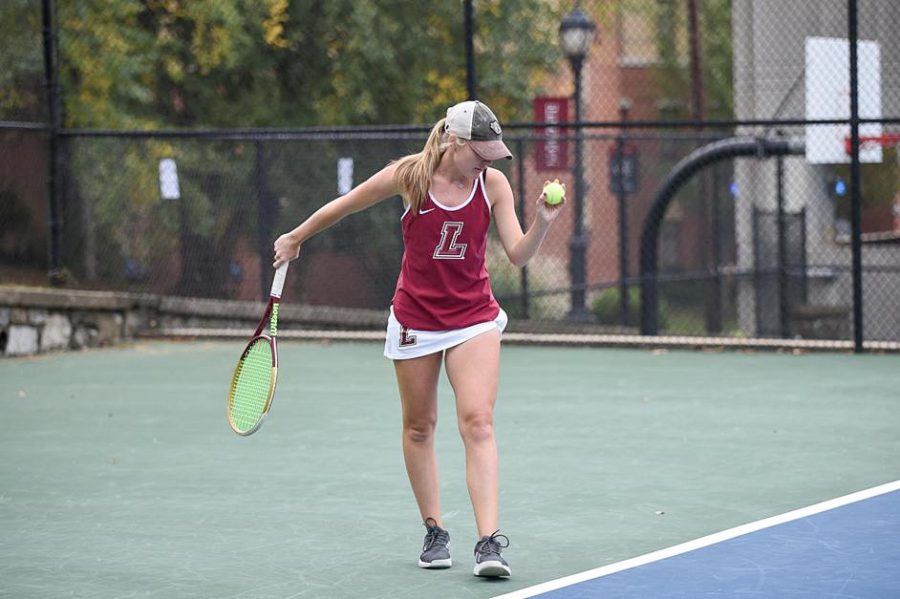 Both the men's and women's tennis teams secured a win on Saturday. (Photo courtesy of GoLeopards)

In their second weekend of matches this year, both the men’s and women’s tennis teams played two matches over the weekend. Saturday’s matches were against Coppin State and Sunday’s were against The College of New Jersey (TCNJ).

The men’s team notched its first victory of the season on Saturday with a win over Coppin State, but dropped a heartbreaker against TCNJ on Sunday.

“We did have some great results in singles for the Coppin State match,” junior Nash Lovallo said. “We just needed to come out hotter and be more aggressive in doubles play so we can win that first point and set the tone.”

On the other hand, the women’s team swept the weekend, taking down Coppin State decisively 5-2 with four singles match victories. The Leopards followed this with a dominant 6-1 win over TCNJ.

“Playing on our home courts felt great,” junior Jessica Siegel said. “We were all really excited to compete as a team this week. I think we were all more relaxed since it was the second match this season. This whole week prior we were just practicing and doing everything we could to prepare.”

The men started slow on Saturday, dropping their first doubles match. However, the Leopards used this as motivation and were more successful in singles play.

“My doubles partner and I felt like we played really well,” sophomore Davis Esslinger said. “Even though we lost the doubles point we still went into singles with a lot of confidence and I think everybody just played really well off the get-go.”

The Leopards came back strong, recovering from the opening doubles loss to win all but one of their singles matches. They then tacked on an additional doubles victory from senior co-captains Will Barry and Ross Coleman. The final tally was 4-3 for Lafayette.

The women found success on Saturday winning both doubles matches and followed that up with four singles victories without dropping a game.

“My approach this weekend was to train hard, play well and enjoy being on our home courts,” Siegel said. “I was super pumped to be competing side by side with my teammates. I really enjoy the atmosphere and the competitiveness.”

Sunday was a different story for the men as they dropped their first doubles match once again. While they did stage a comeback, it fell just short.

“Winning that first doubles point is just so important, and winning singles after that is just really tough,” Esslinger said. “Unlike Saturday, we didn’t feel we played as well in the doubles and then went into singles with a lot less confidence.”

The Leopards tried to keep it close with wins from Barry, Lovallo and freshman Arman Ganchi. Going into the last two matches of the weekend, they had a chance to seize victory from the jaws of defeat.

Unfortunately, the team suffered as Esslinger sustained a quad injury early in his match. While playing on it for the rest of the set, eventually he had to forfeit to get checked by a doctor.

“He served and I took too wide of a step and immediately fell,” Esslinger said. “It got continuously worse as the match went on, and I could barely change direction from right to left.”

Esslinger’s injury was a death sentence for the Leopards as they ended up losing the overall match to TCNJ 3-4.

While that was happening, the women’s team went on a tear, winning all but one match and clinching a final score of 6-1. They also were able to sweep the doubles matches for a successful day.

“I think all of our doubles team have really good chemistry,” Siegel said, “doubles are something we work on a lot during practice, and I think we are all definitely improving.”

“[The women] are really doing a really good job of keeping the ball in play, you just see their opponents really breaking down and frustrated with the level of play that our women had,” Esslinger said. “In addition, they have a ton of momentum right now.”

The tennis teams play next weekend against Niagra University and Sienna College at Sullivan Courts with a 1 p.m. start time.