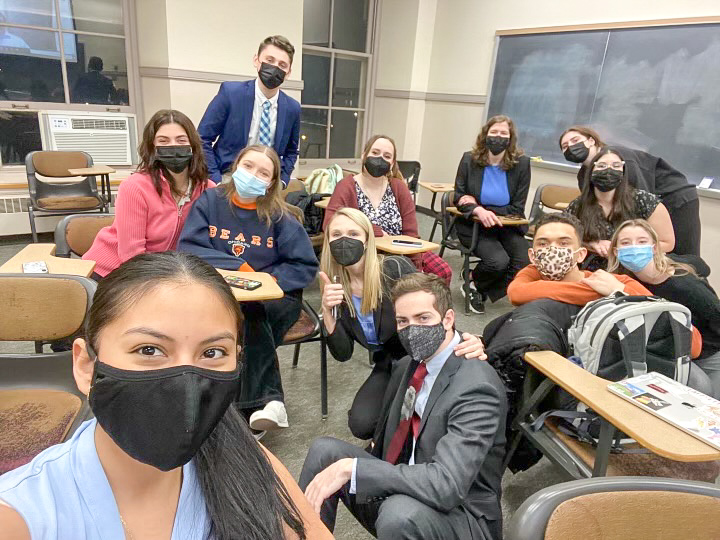 After their success this weekend, the Mock Trial A team may have a shot at the national qualifying round. (Photo courtesy of Thania Hernandez '25)

Three Lafayette competitors won individual awards for their performances. Jillian Updegraff ‘22 won an attorney award for her role on the prosecution, and Becca Scott ‘22 and Aliana Mediratta ‘25 both won witness awards.

The top six teams from the UNC tournament received bids to the Opening Round Championship Series (ORCS), the second round of the American Mock Trial Association’s national tournament structure. The Lafayette A team placed seventh, just missing one of those bids. However, an additional 24 teams nationally that did not receive a bid at a regional tournament will receive an open bid, and the Lafayette A team currently ranks fourth on the list of teams eligible for such a bid.

“We probably have a good shot given that there are twenty-four bids,” Scott, one of the team captains, said. “It’s very likely that we get offered one, and we don’t always get to move on to ORCS but now we get to discuss with the team if we want to do it.”

The tournaments this weekend required some quick adjustments and flexibility from the team, noting the relatively recent shift from in-person to online.

“It was supposed to be an in-person tournament, and we ended up having to go online last minute,” Updegraff said. “They made that decision at the beginning of 2022, so that was a very quick shift.”

Updegraff, who is also a captain, expressed that it really has been a year-long effort.

“We came into the beginning of this competitive season in the fall with only eight returning members, and four were seniors, so we thought it was a rebuilding year. We actually fielded twelve new people this year, and we weren’t really sure what the spring was going to look like,” Updegraff said. “I think that was one of the things that was most exciting about this weekend and how well everyone did.”

Mediratta was one of those new members this year.

“I did debate in high school, but I have never done mock trial before, but it’s a great team and it was a really great tournament,” Mediratta said. “Everybody was really invested in how it went. I’m really proud of of the performance that my team gave and how we did really well, even with some last-minute wrenches thrown in.”

“I am very proud of the team, they have been working hard all year and competing in a virtual format is very difficult, but they did a great job,” Director of Forensic Activities Scott Placke said.

Updegraff said that she feels confident that the team will continue to perform well and also encourages students to join.