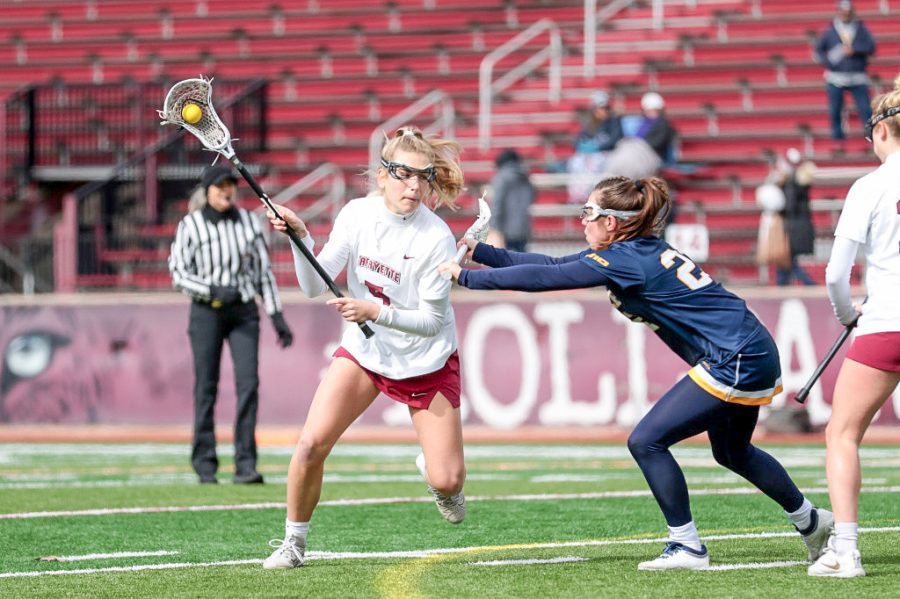 The women’s lacrosse team (1-2 overall, 0-0 Patriot League) secured a victory against La Salle at home last Saturday 11-9. Coming off a tough loss to Drexel last Sunday, the Leopards, who have not been able to clinch a win since March 2020, were hungry to achieve their first win of the season.

“A lot of what we did to prepare was kind of fixing the things that we could’ve done a bit better at Drexel and just taking that into LaSalle,” senior attacker Olivia Cunningham said. “I think the team was overall fired up and really wanted to win. I think that’s what helped us the most, just that drive and motivation.”

La Salle was the first to hit the back of the net, scoring two goals to open up the first period. Lafayette fired back with three goals of their own coming from Cunningham, junior midfielder Kerry Tuorto and junior attacker Meghan McLachlan.

“I play attack so I can definitely speak for the offense, when we get some momentum we’re really good at feeding off of that and keeping that momentum going,” Cunningham said. “I think that’s really what helped us in that second quarter to bring us ahead and give us a nice cushion.”

La Salle managed one more goal before the game went into halftime. The Leopards had now doubled La Salle’s score, with the scoreboard reading 8-4.

To open up the second half, La Salle started a two-goal run. Each team sent additional goals into the net before the third quarter ended, one of which was Chiasson’s second of the day.

“Chiasson played awesome,” Cunningham said. “She was great in the midfield. We can always rely on her for her speed carrying the ball up, and I think she played outstanding.”

La Salle looked to come back once again, opening up the final quarter with two goals. Cunningham had other plans, as she completed her hat trick and added a fourth goal with 42 seconds left to solidify the 11-9 win.

“It was bittersweet to have my last first home game. I just wanted to go out there and do what I could for the team,” Cunningham said. “It was super important to us that we won, just because we want to make the most out of this season and it was just super exciting for me.”

Sophomore goalkeeper Lexie Coldiron made 14 saves on the day in comparison to her La Salle counterparts’ seven. The Leopards led in ground balls (17-14) and clears (20-22 to 13-13), while the Explorers held the advantage in total shots, 29-23.

“I think we’ve done a great job with our defensive units that are offensive units,” Cunningham said. “Something that we’re focusing on is 50/50 balls, making sure that whenever the ball touches the ground, we come up with that ball because those are the super important plays that end up mattering a lot.”

Next up for the Leopards will be their Athlete Ally game against Iona College at home tomorrow at 4 p.m.

“We have a couple girls on the team that are super passionate about it, so I’m super excited to have one of those games,” Cunningham said. “We went to the men’s lacrosse Athlete Ally game which was a fun time, so it’ll be exciting for us to do that as well.”