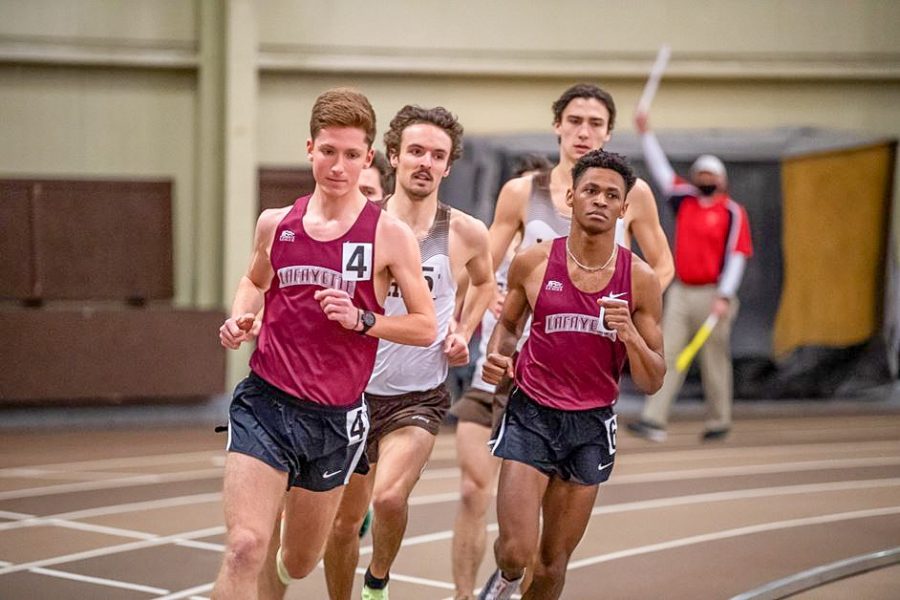 Lafayette's track and field team overcame setbacks with Covid during the season to participate at the Patriot League Indoor Championship. The men's team finished in seventh overall for the weekend. (Photo courtesy of GoLeopards)

The track and field team’s indoor season culminated at Bucknell’s Gerhard Field House this past weekend, where ten schools convened for the Patriot League Championships. While the men placed seventh overall, the women finished eighth out of ten Patriot League teams.

Senior sprinter Jordan Anderson ran the 60-meter race in a time of 7.00 seconds, finishing in seventh overall. This marked Anderson’s first Patriot League championship, due to Covid his sophomore year and opting to play the spring football season his junior year. He beat his career-best time by a tenth of a second.

For the women, the distance medley relay team of senior Cassandra Wilk, sophomore Nava Chevan, junior Alexandra Borik and freshman Casey MacElhiney ran 12:46.28good for eighth out of ten competing teams. This was the first Patriot League Championship race for the three non-senior runners, but they refused to be daunted by the challenge.

“I was very excited to go into my first Patriot League meet, but it was also very intimidating,” Chevan said. “There were many inspiring athletes, and the competition was strong. It felt great to score points in the women’s distance medley relay, especially because I got to share it with my teammates.”

In the men’s relay, the team of freshmen A.J. Sanford II and Ryan Moore, senior Ryan Murphy and junior Bobby Oehrlein finished sixth out of nine with a time of 10:15.07.

On the women’s side, senior Autumn Sands finished ninth out of 32 in the 3,000-meter run, recording a time of 9:54.64. Sands, who broke a 31-year-old school record at the end of January in the event, approached that time in this meet but could not top it.

“I think we did a really good job maintaining a close-knit environment and supportive team,” Chevan said. “Even though we are a small group compared to our competitors, we were able to cheer just as loud as them.”

“Covid impacted our indoor season a lot. We had to miss several meets, as many of us were in and out of quarantine throughout the winter. It was all very disrupting to our training,” Chevan said. “Coach Curcio was satisfied with our overall performance given the hectic few months we had. We’re ready to start preparing for the outdoor season, and we want to make sure we start off on the right foot.”

With short turnaround, the track and field team will now turn its focus to the outdoor season.

“We always set personal as well as team goals, and I think that’s really going to help us push each other in the outdoor season,” Chevan said. “As always, one of our biggest team goals is to beat Lehigh.”