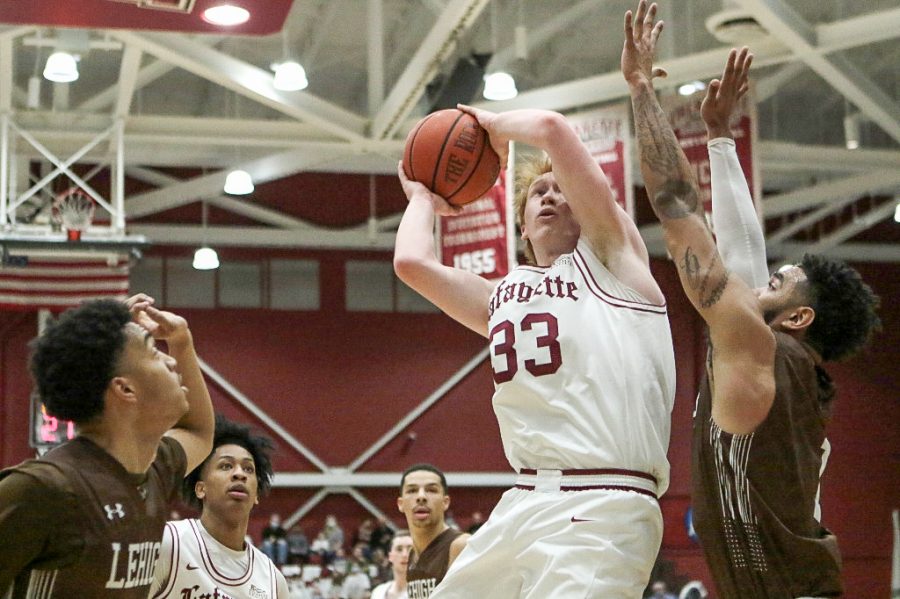 Junior Leo O'Boyle drives and puts up a contested lay up during senior day loss against Lehigh. (Photo courtesy of GoLeopards)

This past Saturday, Lafayette (10-20 overall, 7-11 Patriot League) hosted Lehigh (12-18 overall, 10-8 Patriot League) on senior day in front of a packed Kirby Sports center to support Head Coach Fran O’Hanlon in his last regular-season game before he retires. The game was a struggle as the Leopards lost the game 78-58. The Leopards then went into the first round of the Patriot League Tournament on Tuesday night, which ended up being their last game of the season as they fell in overtime to Bucknell 82-81.

The three Lafayette seniors, guard Tyrone Perry, guard Jay Vaughan and forward Tomas Verbinskis started against Lehigh in honor of their last game with the Maroon and White. Tyrone was a key player with eight points and four assists. Vaughan put in a career-high six points as well as a steal and a rebound, while Verbinskis put up five points.

Saturday marked the final regular-season game for the Leopards, an opportunity to translate skills from the rest of the season into beating rival Lehigh. The last time the Leopards and Mountain Hawks faced off ended in a 73-69 victory for the Leopards just two weeks ago.

“We tried to take everything we’ve learned from our previous games and apply it into Saturday,” Sondberg wrote in an email. “Lehigh just came out making their shots and we had some defensive struggles that had a huge impact on the game. We just knew that we were better than what we showed out there [in the first half].”

Unfortunately, the hole the Leopards dug themselves into early on in the game was too deep.

Lehigh started the game on a 21-7 run in the first 10 minutes. From there, the Mountain Hawks did not take their foot off the gas, taking a 20 point lead into halftime, 44-24. Ultimately, the Leopards struggled to find the net and were unable to chip away at the deficit, falling by 20.

In addition to recognizing the seniors, Lafayette honored O’Hanlon with the unveiling of jersey #27, hung in Kirby Sports Center to celebrate his twenty-seven years as head coach. The stands were decorated with white t-shirts printed with his face on the front with his renowned quote on the back: “leave it better than you found it.”

The student section was sold out, and rows of alumni returned to watch O’Hanlon coach his last game. It was the most packed the Kirby Sports center has been since the beginning of the pandemic, according to ESPN.

“The energy at Kirby was awesome,” Sondberg wrote. “Being a sophomore, it was definitely the most packed home game I’ve played yet.”

The Leopards had a quick turnaround as Lafayette entered the tournament on Tuesday with only two days of rest after the Lehigh loss. Lafayette received the eighth seed for the tournament and was to face No.9 Bucknell.

Despite the rankings, Bucknell came in rolling after a double-digit victory against Boston University.

Lafayette came into the game executing on offense, connecting on almost 60% of their shots and 55% of their three-point attempts. This helped in leading the Bison at the break, 40-31.

“Our offensive focus for Bucknell was to execute our offense effectively while playing with lots of confidence, and having fun while doing it,” Sondberg wrote.

Perry, Quinn and sophomore forward Kyle Jenkins were crucial in the Leopard’s success on offense. Perry had 22 points, four assists and two steals, and sunk five threes in the process. Quinn, who has been consistent all season, treated this game no different and contributed 18 points. Jenkins added 17 points of his own.

Lafayette lost stride in the second half of Tuesday’s contest. Bucknell flipped the momentum and was able to take its first lead of the night, the score at 60-59 with just under five minutes left in regulation. Both teams traded buckets until the score was at a 71-point stalemate, forcing overtime.

Overtime was expected with these opponents, as they frequently reach stalemates when they go head-to-head. On Feb. 5 of this year, the Leopards won in overtime at home against the Bison 74-72. On Feb. 19, the Bison won in OT in Lewisburg 92-89. Looking at the statistics, this game could have gone either way.

The Bison got out to a quick 77-73 lead to open the overtime before the Leopards stormed back to take it, 79-77. Bucknell then hit a three-pointer but fouled Quinn with 39 seconds to go. He managed to hit both free throws to make the score 81-80 in favor of Lafayette.

The Leopards needed one more stop from their defense, but with 16 seconds left Bucknell nailed a layup to make the score 82-81 with Bucknell in the lead.

“Defensively, we wanted to be physical and play hard,” Sondberg wrote. “This season we went through a lot of adversity, but nonetheless I had so much fun playing with this group of guys and I’m going to miss the seniors.”

With the end of the season comes the end of O’Hanlon’s long and storied career. He retires as the winningest coach both at Lafayette and in the entire Patriot League.