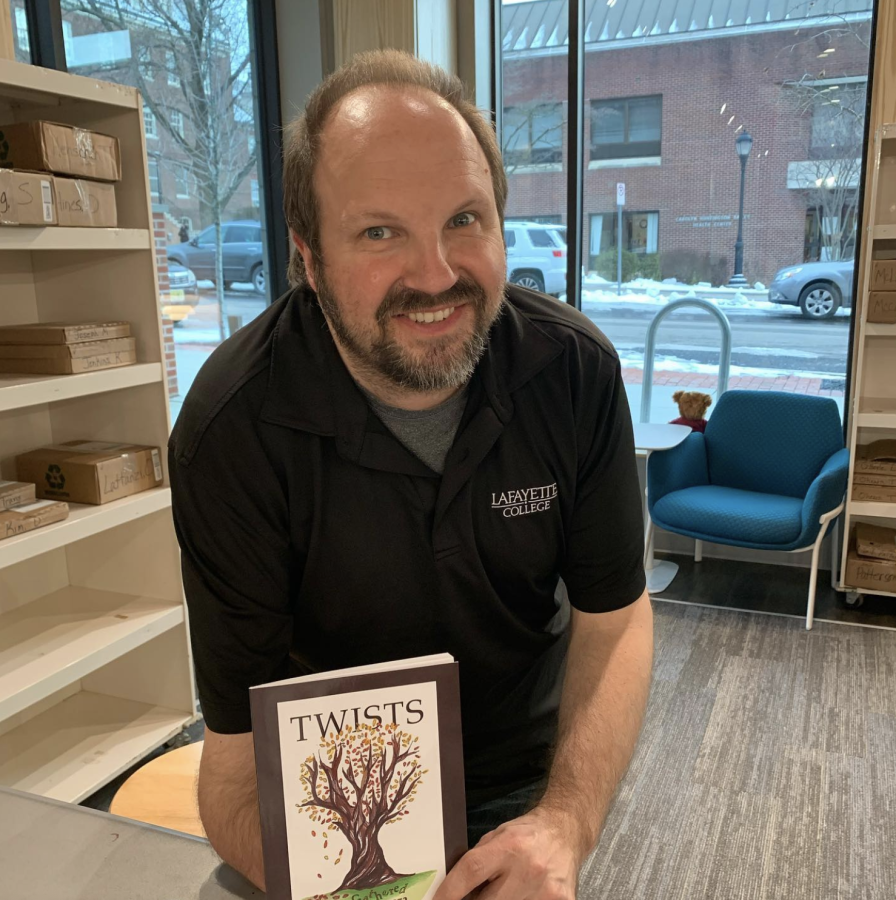 Students can buy staff member Daniel Parry's book at the college store for 20% off. (Photo courtesy of @lafayette_college_store)

For your next read, look no farther than Lafayette’s own bookstore. Darrel Parry, the course materials coordinator at the college store, published his first book, “Twists: Gathered Ephemera,” on Dec. 27. The book is a collection of poems and cartoons inspired by Parry’s passion for writing and performing over the past 30 years.

The title poem of the book, “Twists,” discusses physical disabilities. The idea for this poem was based on a conversation between Parry, who has a physical handicap himself, and a friend that suggested he submit work to disability publications.

“I told her, ‘But I don’t write poetry about disabilities.’ She then tried to convince me that all my themes fit. It made me think about how my poetry is so very me, and wonder how much of what I write really is informed by my handicap,” Parry said.

“Somebody [at the book launch] said something along the lines of, ‘The mark of a good poet is that your poetry is something that only you could write.’ And that’s how they think of my poems,” Parry said. “That’s really accurate, because my poems are funny and extremely quirky, and they’re just kind of really weird. And that is what makes people like them so much, I guess.”

Parry said he is aware that many college students turn away from poetry because they do not understand the full scope of the poetry community, as higher education tends to leave that component of literature out from the curriculum. He previously held an event called “Poetry is Stupid, Change my Mind,” where he read pieces from his book. Parry recalled that one person who previously claimed he hated poetry admitted that “I think there’s a poem I like now.”

“There is a lot more [poetry] that is more accessible and more relatable than what people typically think of as poetry,” Parry said.

As a member of the college’s staff as opposed to the faculty, Parry is proud of his literary work.

“The interesting thing is, you see a lot of faculty publishing books because it’s one of the things they have to do. You don’t often see staff members publishing books. So it’s kind of cool in that regard,” Parry said.

Aside from publishing this book, Parry runs his own online literary journal called Stick Figure Poetry Quarterly. He has had work featured in multiple places, including the Moonstone Art Center in Philadelphia, SpoFest, San Francisco Literary Beast Curl and some online literary journals. He also co-hosts the Lehigh Valley virtual poetry salon and runs a local open mic night at the Memorial Library on Northampton Street every first Monday of the month.

Students picking up their copy of the book at the college store will get 20% off and an extra surprise inside from Parry. “Twists: Gathered Ephemera” can be purchased for $14.99 from various online retailers and downtown Easton’s own Book & Puppet Company.