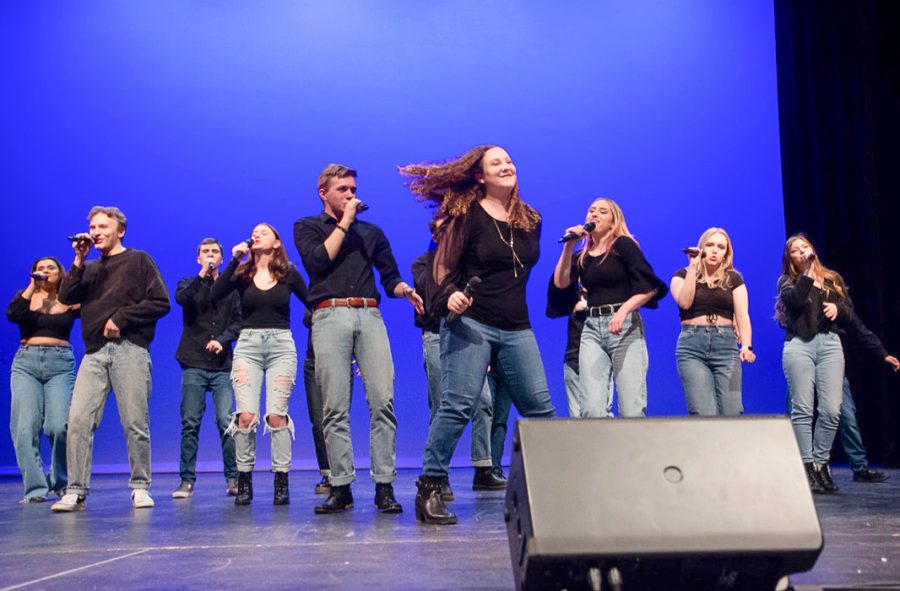 Just like a scene out of “Pitch Perfect,” 22 of Lafayette’s singers spent the last weekend performing their hearts out—accompanied by nothing but their own voices.

The groups competed against five other groups from local colleges.

Both groups implemented choreography, worked on their harmonies and devoted extra rehearsal hours every week in preparation for the competition.

Meredith Forman ’24, Soulfege’s music director, explained that she and Julianna Shmaruk ’23, the group’s president, worked together to make the choreography “more complex” and ensure that the group’s harmonies were “more uniform.” They performed three songs: “Valerie” by Amy Winehouse, “Everybody Talks” by Neon Trees and “Somewhere Only We Know” by Keane.

Peter Canevari ’23, president of the Chorduroys, said that his group performed one song they have known only since the beginning of this semester, “Leave the Door Open” by Silk Sonic. According to Canevari, the Chorduroys “spent a good chunk of rehearsals learning” choreography to accompany the new number. The group also performed two songs they knew prior to the semester, “I Thought She Knew” by NSYNC and “Haven’t Met You Yet” by Michael Bublé.

“It was a very long day, but [it was] so much fun to spend it with the group and get to meet lots of other students who share our love of singing,” Canevari said of the experience.

The competition also provided an opportunity for members to form closer bonds within their own groups. According to Forman, these close relationships helped Soulfege’s performance because “everyone was having fun, smiling and wanted to be there and talk to each other.”

Forman explained that since she has a frame of reference for what these competitions are like now, she is even more enthusiastic about returning next year. Both groups agreed that they are excited to go to the competition next year, but emphasized that for them, a cappella is much more about having fun than competing.

“It’s something the group really looks forward to every year,” Canevari said of the ICCAs.

Soulfege member Amanda Graf ’24 added that she “was so nervous, but it was so worth it.” She explained that the support felt between groups set this competition apart from others.

“You have a bunch of really talented people and you don’t have to think constantly about beating them. You can just sit back and appreciate all the time put in and the talent each group has,” Graf said. “The level of talent was through the roof.”

More information about the groups can be found on their Instagram profiles, @lafchords and @lafayette_soulfege. All four of Lafayette’s a cappella groups will be performing at the Spring Jam in May.