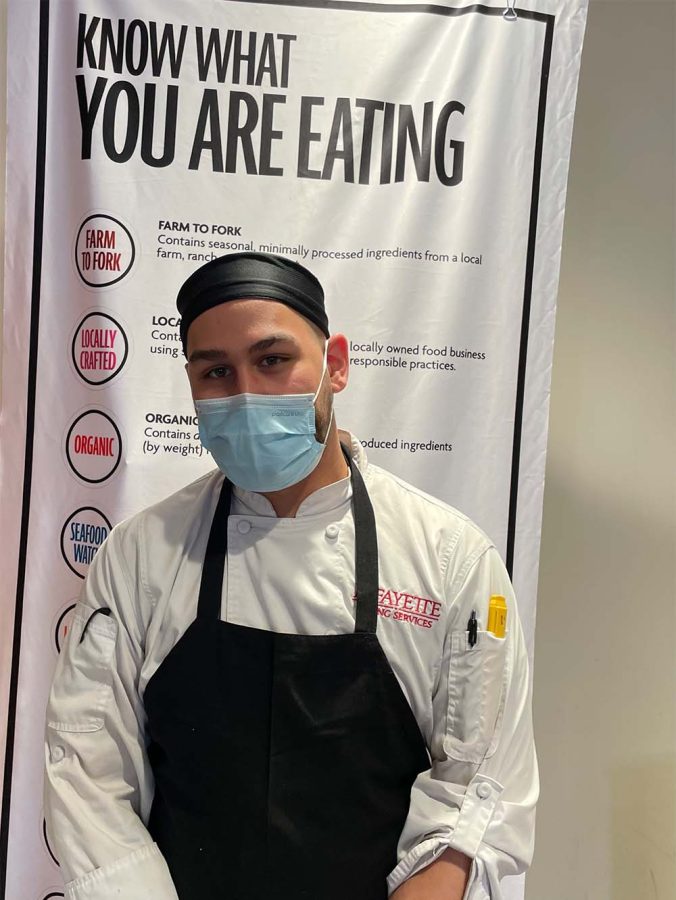 After almost three years folding crepes for the campus community, Ryan Sheeran, the beloved crepe chef in Marquis Dining Hall, will be leaving at the end of the spring semester.

After some time in catering, Sheeran moved into making crepes. He confidently shared that he did not find difficulty in learning the skill.

“It only took me one try, I think I am a natural,” Sheeran said.

Sheeran is a proud Pennsylvanian who roots on its various schools and athletic teams. Prior to joining Lafayette, Sheeran worked for Lehigh University for almost nine years as a part of their Athletic and Event staff. Prior to his stint at Lehigh, Sheeran worked for the Philadelphia Eagles on their game day staff.

“I did not have any previous kitchen experience. I never was trained by a chef or anything, so acclimating to the quick pace of the kitchen here was difficult. I was excited at the prospect to gain and develop my kitchen skills, though,” Sheeran said.

When it comes to mentors, Sheeran proudly said that despite some training by Bri, a fellow Marquis chef, he was “pretty much” on his own.

“You kind of have to go on your own after training. Everyone has a job and purpose here and you have to be efficient to get the service done,” Sheeran said.

Sheeran added that after he became comfortable at his station, he gained many achievements for which he is proud, but one “took the cake.”

“My greatest accomplishment here was figuring out how to get a Chick-fil-A crepe to work, and to this day kids still ask for it,” Sheeran said. “You have to recreate the Chick-fil-A sauce, which alone is tough, plus Murray’s chicken is always grilled here and I had to get it fried, which is a miracle, you will never find fried chicken in this building. The line went all the way to the salad bar for this!”

For those still hoping to taste one of Sheeran’s crepe creations, there is still time to stop by Marquis.