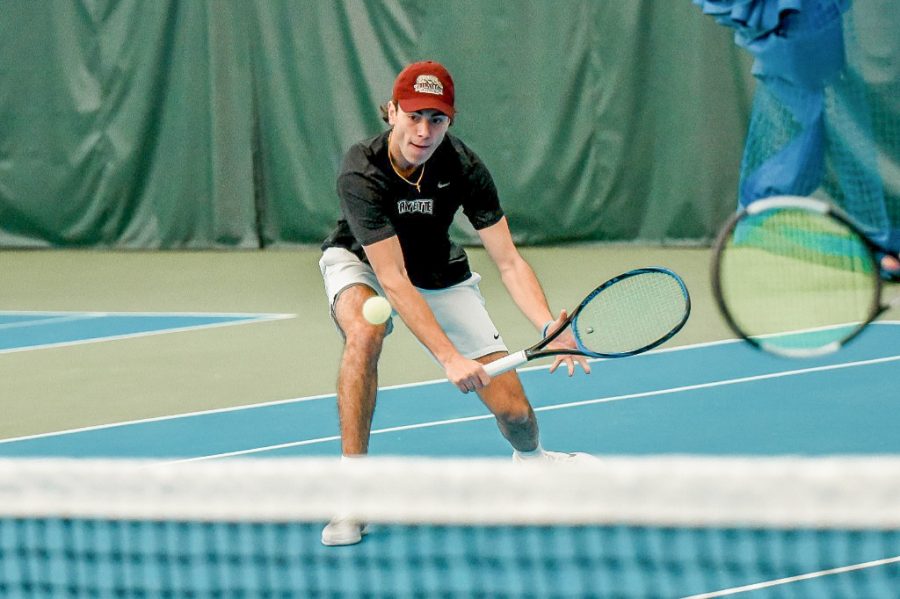 Both the men’s and women’s tennis teams lost to the Niagara University Purple Eagles and the Siena College Saints last weekend at Winning Touch in Easton, Pa.

On Saturday afternoon, both the men’s and women’s teams fell to Niagara, losing 7-1 and 5-2, respectively. The team stayed hopeful, however, and considers the weekend a learning opportunity.

“The big matches are the Patriot League matches, so I think these are really good to figure out what we need to work on and what our strengths and weaknesses are,” senior captain Ross Coleman said.

The men’s team spent most of the week prior to the match rearranging their doubles pairs due to an injury on the team. They all played in new pairs for Saturday’s match.

“A lot of the week we were spending trying to figure out the doubles pairings and figuring out who plays best with who to set us up for success the most,” Coleman said.

Freshman Arman Ganchi secured the sole victory in his match against Niagara, winning 6-4, 6-4.

“Arman Ganchi really stepped up this weekend. He had a really good win on Saturday, playing a really tough opponent. That was a really cool win,” Coleman said.

Senior Maureen McCormack won her match against Niagara 6-0, 6-2 for the women’s team.

“I was playing arguably the best tennis I’ve ever played in my life. I don’t know how I did it, but I won,” McCormack said.

Freshman Olivia Boeckman was also successful in her match, winning 6-3, 6-1.

“[Boeckman] was also playing amazing, she was hitting the ball so hard,” McCormack explained. Boeckman and McCormack joined forces in the women’s doubles against the Eagles to claim another victory.

Sunday came with more losses for the Leopards when both teams went against Siena, the men’s team falling 7-1 once again.

Due to another injury on the men’s side, the Leopards had to scratch their new configuration and revert back to their original pairs. Junior duo Nash Lovallo and Josh Wolfe came out with a win for the Maroon and White, their match ending with a score of 6-3.

“Getting that doubles win with [Lovallo] on Sunday against Sienna was really huge for me for my confidence because so far in the previous matches, I was not playing good doubles,” Wolfe said. “If I played even just a little bit better, I could have beaten these teams that were very, very beatable. I was working really hard on being more aggressive this week, which is what I needed to do.”

“That is a really good team that they beat, and that was some of the best doubles I ever saw them play,” Coleman agreed.

“I think the team did really well on the aspect that they went out there and they fought,” McCormack said. “Even though we lost the doubles point, everyone went back out there to try to redeem and fight for singles. The outcome just didn’t work.”

Junior Eleanor Campbell had the only victorious match, defeating Siena 6-1, 6-4.

“I’ve really seen this big progression throughout each match, how people have gotten better as we’ve played more matches which is really cool,” McCormack said.

Despite the Maroon and White being defeated this past weekend, the teams are keeping their hopes high and focusing on the promising moments of their matches.

“[Jessica Siegel] was down a set and then came back to get the next set. She lost in a tie break but it was a good effort by her to get the second set back,” McCormack said. “Halle Denardo is just consistently coming out and proving that she’s a really good player and going toe to toe with her opponents.”

Coleman played third singles for the first time with a promising outcome.

“That was the highest I ever played singles in my college career, so that was really cool to be in the top half of the lineup for the first time ever,” Coleman said.

The Leopards now focus on improving as a team to work towards more successful outcomes in future matches.

“We start out with a good amount of energy, but when we get down early I think our energy just completely drops. That’s something that we have to be better at, just sustaining that energy for the duration of the match. That will take us a long way,” Wolfe said.

The Lafayette men’s and women’s tennis teams play against Saint Joseph’s University this Saturday at 1 p.m.

“We played St. Joe’s last year and it was close. This year, I think we really want to turn that the other way,” McCormack said.

“This is our first away match of the season so we’re not going to be on our home court. The big thing that we got to work on is playing the entire match with the same intensity as we’ve had at our peak moments in the matches that we’ve played,” Coleman said.

The women’s team will additionally be hosting Delaware State on Sunday at 1 p.m.