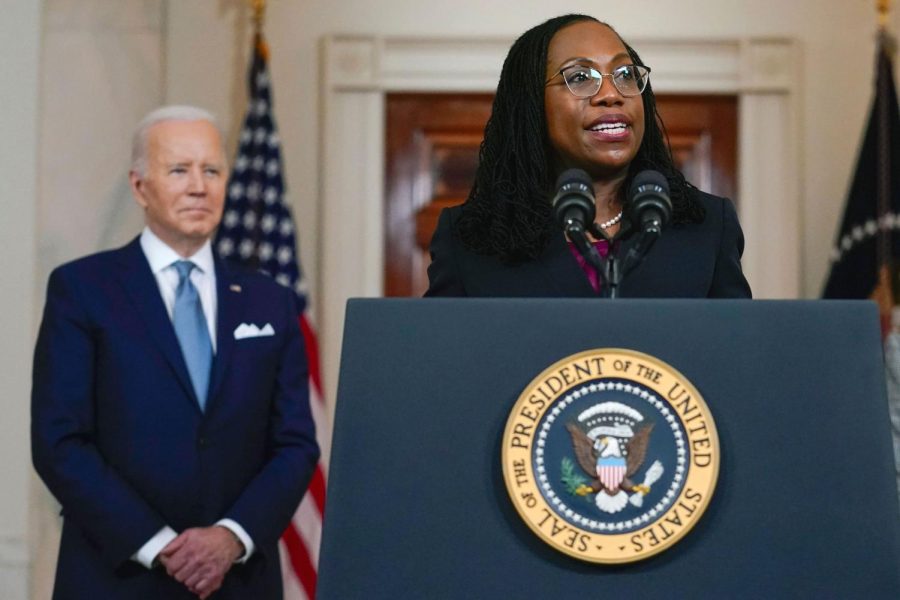 “Her appointment will move the court forward not just politically, but also culturally,” Kait Ahern ’23, a board member of the College Democrats, said.

“In the history of our country, we have had 115 Supreme Court Justices. Only five of those have been women, and only three have been people of color. Black women have been excluded from sitting on the court since the birth of our country, and their place on its bench is long overdue,” Ahern said.

Jackson would also be the first justice to have had experience as a public defender.

“In terms of Judge Jackson’s qualifications, she has more experience than some previous Supreme Court nominees. She’s been a federal district court judge for eight years, she has served on the Appeals Court for the District of Columbia since June of 2021,” Government & Law Professor John Kincaid said. “She is very much supportive of labor unions and criminal reform, being a former public defender, and will bring those views to the Supreme Court.”

The confirmation hearings will begin in the Senate Judiciary Committee on March 21, according to NBC News. If confirmed by the evenly divided Senate, Jackson would replace Justice Stephen G. Breyer, the senior member of the court’s three-member liberal wing. Breyer announced last month that he would retire at the end of the current court term this summer if his successor was in place. However, as Jackson would be taking Breyer’s seat, the ideological balance of the court is not likely to shift dramatically.

“She’s a very liberal justice and has strong support from liberal organizations so she fits the requirements for a Democratic president making a nomination to the Supreme Court to replace Stephen Breyer,” Kincaid said.

Jackson’s appointment was one of Biden’s critical promises he made during his campaign for the primaries. The nomination poses a new possibility for Biden to gain more voter support, specifically from the Black voter base, and increase his approval rating, which has often fluctuated in the past few months. This would allow for a greater chance of reelection in 2024.

“In campaigns, Black women are colloquially considered the backbone of the Democratic Party. But their needs are almost always ignored by the politicians they elect, and the promises they make on the campaign trail are often empty,” Ahern said. “Biden promised Black women that he would appoint a Black woman to SCOTUS and he followed through. Ketanji Brown Jackson is as qualified as any other nominee would be. He [Biden], and the rest of the Democratic Party, owes this to the Black women who have secured their wins in recent elections.”

Lafayette’s Women in Law Society echoed their support for the historical nomination of Jackson.

“Judge Jackson presents an example of an extremely qualified jurist regardless of her race and gender,” Women in Law Society President Jules Bernstein ’22 said. “It’s also amazing to see the Supreme Court become more representative of the country, with nearly half of the Justices being women pending Jackson’s confirmation and another African American on the court.”