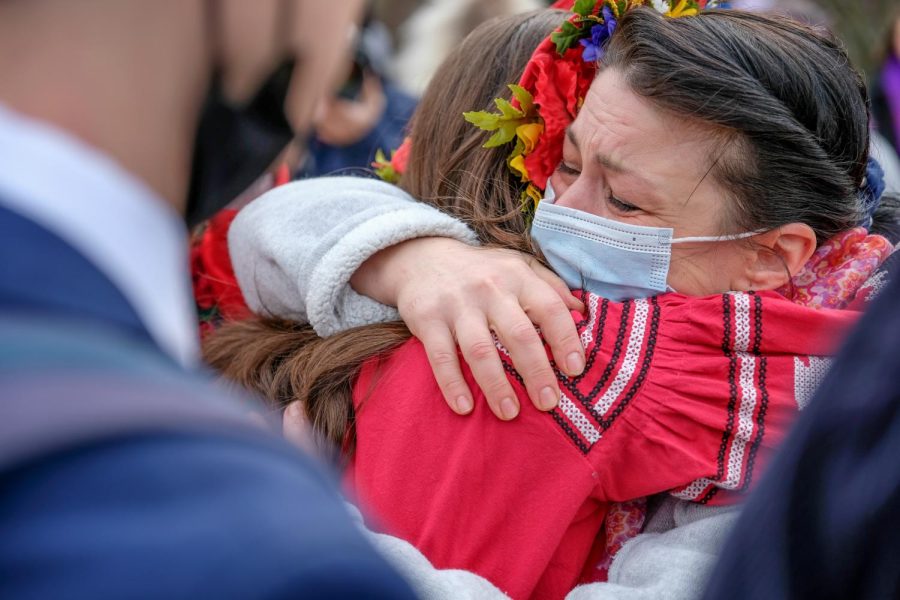 Students, faculty and staff gathered to express their thoughts about the Russian invasion. (Photo by Caroline Burns '22 for The Lafayette)

For some students across Lafayette’s campus, any semblance of regular life stopped a little over a week ago when Russian bombs began to rain down on Ukraine. For those with family members facing uncertain futures, the horrific violence has left them in a state of constant dread.

Ksenia Tymchenko ‘25, a second-generation Ukrainian, described the shock and sadness she witnessed while with community members as the war began to unfold.

“I’ve just not been sleeping. It was so hard. I went to this Polish store near here, and I was just overwhelmed by the sadness, I started crying because it smelled like Ukrainian food,” Tymchenko said. “I just wish I was home, back in Philly, so I could be in my Ukrainian center.”

Tymchenko grew up attending Ukrainian school and church, describing herself as inextricably bound to Ukraine.

“I’ve been in the Ukrainian community all my life. My grandparents, they emigrated from Ukraine to get away from the Soviet Union,” Tymchenko said. “It’s my whole life.”

Tymchenko attended a demonstration in Philadelphia on Friday to protest against war and described her fellow protestors as both horrified and sad.

“Everyone was asking about their [families], like ‘oh did they get out of Kyiv?’” Tymchenko said. “No one really thought it would get to this point.”

Tymchenko was one of many students who participated in a demonstration on Tuesday that drew over 100 students to the quad at lunchtime. Dressed in traditional Ukrainian clothing, Tymchenko stood alongside students holding signs in Ukrainian and English, disavowing the war and Russian President Vladimir Putin.

Many speakers who expressed their painful emotions prefaced their statement by saying that they did not prepare any remarks but still felt compelled to speak. Emotions ran high at the demonstration, with crying throughout. When one speaker stated that she did not know how to finish a speech detailing her personal experience, an audience member called out, saying “Slava Ukraini,” a Ukrainian national salute meaning “Glory to Ukraine.”

“I have my loved ones in the war zone blocked in Kyiv, my cousin doesn’t flee by her will,” Reni Mokrii ‘25, a student from Moscow who has family in Russia, Ukraine and Belarus, wrote in an email. “My loved ones in Russia and Belarus are under the risk of repressions for our liberal views. Young men in my family and friends in all three countries might be drafted any time with no will to kill and die in this war. I don’t know when I will be able to see my family again.”

Mokrii emphasized her support and care for Ukraine due to her heritage and family.

“As someone who is from Russia, but is bound with Ukraine by her blood and people I love and care about, I do not believe this war is between Russians and Ukrainians,” Mokrii wrote. “This war is between Putin and humanity.”

A Russian citizen and student that wished to remain anonymous described her past few days as living in a trance. She stated that the general campus environment has shown her that most people understand that Russians are against aggression.

“Since the annexation of Crimea in 2014, the war has been basically going on for eight years, this is not a new thing,” she said.

Maksym Turkot ‘24, a student from western Ukraine, also spoke at the demonstration about his family at home.

“My mom and sister had to leave the country, as do hundreds of thousands of people right now. I read a lot of news about the issue, specifically updates about each specific event,” Turkot said through the megaphone he held. “Every thirty minutes, there are just twenty new updates calling people for go to shelters, about bombing activity.”

Turkot described the experience of walking around a quiet campus as surreal.

“I hear all those things that are happening, then here it is just quiet, and nothing. It’s like, is anything even happening? I think it’s important for people here to at least be very mindful of this. A lot of people are dying, it’s not just a limited military operation, it’s cities being bombed every single day and dozens of people dying every single day,” he said.

Besides students, some Lafayette faculty have also been heavily impacted by this conflict. Government & Law Professor Katalin Fabian, having been raised in communist Hungary, described the emotional connection she felt to the crisis.

“I’m helping this weekend, a 99-year-old relative, the only one I have, and the reason is the Holocaust. She is the only family who could escape to this country,” Fabian said. “Anybody coming from that part of the world, let it be German, Russian, Ukrainian, Polish, if not from immediate experience, your parents, your grandparents, your friends, everybody migrated and being shot at, it’s very personal.

Fabian said that the speakers’ words were powerful and “unbelievably painful” on many levels.

“I feel pain. I feel anger. I feel weakness. I feel hatred. I feel fear. I feel shock. I feel dizzy and sick and want to cry a lot,” Mokrii wrote. “Yet I want to fight. I cannot just close my eyes and try to just live my life when people—my loved ones, friends and family, and just ordinary simple people — are suffering.”

Those that want to donate can go to the International Rescue Committee, Polish Humanitarian Action, or Ukraine House NGO websites.