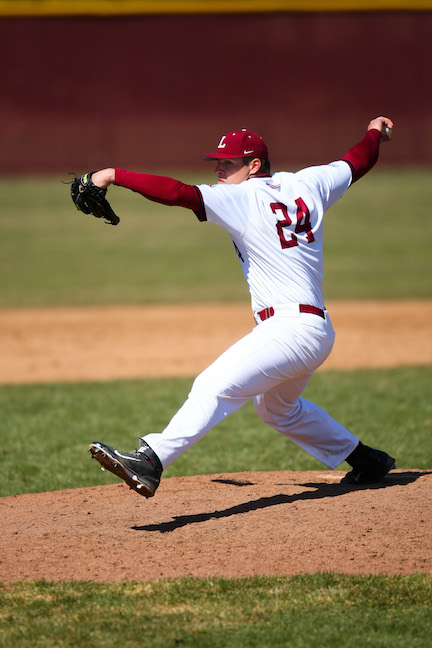 Katelyn Arnold: So, this weekend you threw a complete game, only allowed three runs, and had a career-high 11 strikeouts. Tell me what that was like.

David Bednar: It was just nice to compete and help my team get a win.

KA: Was that more or less exciting than your movie-star appearance in the “A Day in the Life of a Lafayette Student Athlete with David Bednar” video that recently was released by GoLeopards?

DB: I’d say it was more exciting, because its always nice to beat Penn and get ready for our Patriot League opener this coming weekend.

KA: As of Sunday night, the video had over 800 views on YouTube. Would you consider yourself a movie star?

DB: I would definitely say so.

KA: Back to the baseball. Moving into the second half of your junior season, how do you feel about your own development as a pitcher?

DB: I’ve definitely grown a lot as a pitcher just in the way of competing in the strike zone, going after people, and giving us the best possible chance to win.

KA: Who is your toughest critic?

DB: Oh yeah, put her. She said after my first weekend lost that she only talks to winners, so she didn’t talk to me for a week.

KA: How do you feel about the progress the team has made moving into the second half of the season?

DB: We’ve definitely shown a lot of promise and I’m really excited to see us finally all put it together during Patriot League play.

KA: What are you hoping to achieve in the last two months of the season?

DB: Obviously to make the playoffs and to win the Patriot League.

KA: What was your favorite moment of this season so far?

DB: Our spring break trip to Spartanburg, South Carolina was a lot of fun. We played a lot of baseball and got to play some pretty good teams.

KA: What are your future plans? Do they involve baseball?

DB: Who knows? This summer I’m playing for the Falmouth Commodores in the Cape Cod league in Massachusetts.

KA: What is the funniest thing a coach has ever said to you?

DB: My coach once told me that his daughter could throw a better curveball than I could.

KA: What are your lifting maxes?

DB: I don’t know where the weight room is. I’m still looking for the Maroon Club Strength Center.

KA: Most embarrassing moment while on the mound?

DB: I struck someone out and thought there were three outs but they were only two and I started to walk off the field.