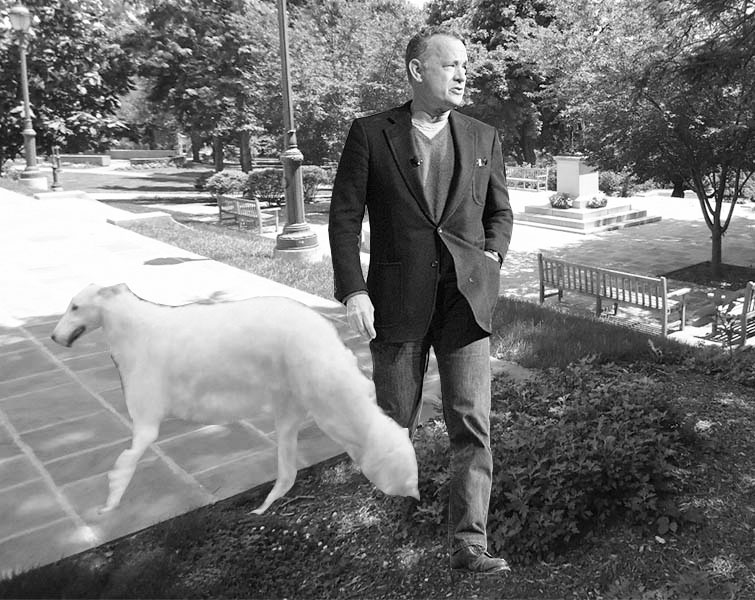 During his visit to Lafayette’s campus, actor Tom Hanks was allegedly attacked by what he called a vicious, frothy-mouthed polar bear. He has now filed a lawsuit against the college for emotional damages.

When Hanks spotted a dog roaming campus, he said it so enchanted him that he couldn’t help but approach it. Students know this big, bright white canine as “the ghost dog.”

“I was drawn to the animal as soon as I saw it walking around the quad. It moved so majestically, practically gliding,” Hanks said. “I’ve never seen such a beautiful dog as I have at Lafayette University.”

“I had my dog treats handy in my front pocket, as I always do,” he said. “Naturally I took one out and raced toward the magnificent creature. But I did not expect what happened next.”

“I open my palm with treat in hand, and the dog tried to eat my thumb. As soon as it opened its jaws I swear in that moment I looked into the eyes of God himself, ready to meet my maker,” he said.

After being bitten, Hanks swore profusely, but no one cared “because it’s Tom Hanks.”

One witness said that the root of the problem was that Hanks got upset when the dog was not interested his treat.

“I saw the dog just spit out his treat, and Hanks just got this disgusted look on his face,” she said. “Next thing I knew Tom clutched his thumb and started shouting. Like, man, get over it, it’s just a dog. Hate to think how he reacted to the reviews of ‘Larry Crowne.’”

When asked about what he thinks of the witness’s story, Hanks didn’t seem to register the question and continued his account in more detail.

“It clamped onto my thumb with its massive jaws, and I was sure it would not release me until it rendered me thumbless. But luckily its owner was able to call the beast off. I swear that was no dog. It was a vicious, frothy-mouthed polar bear, I tell you,” Hanks said.

Public safety officials say that Hanks dialed their emergency number as soon as the event transpired. Several public safety officers raced to the scene to find Hanks attempting to get in a fight with the dog.

“They gave me the choice, Batman or Superman, and I was like are you kidding me? Superman is the real hero. Batman doesn’t even have any powers. I am not wearing a Batman Band-Aid.”

“The only way he could’ve hurt his thumb was from clutching it too tightly when he was pretending to be hurt,” the witness said.

Hanks’ lawyer Andy Coates, had a press conference the next day which was proceeded by a trailer for Hanks’ new film, “Cujo 2.”

“This witness’s story about the dog rejecting Mr. Hanks’ treat is outrageous,” Coates said. “No one can resist a dog treat from Tom Hanks. Not even me. I’m not ashamed to say I enjoy one myself from time to time. Any dog would be lucky to be offered one.”

The college would not comment on matters of litigation.