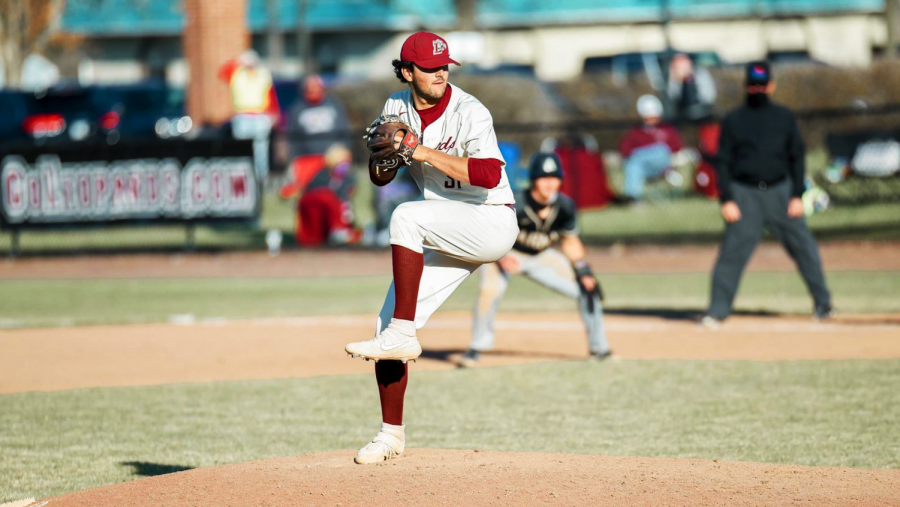 Sophomore pitcher Luke Benneche throws one of his few pitches from the stretch during his two hit, seven inning, seven strikeout shut out of the VCU Rams on Friday. (Photo courtesy of GoLeopards)

After notching their first win of the season on Tuesday against Rider University, the men’s baseball team (2-7 overall, 0-0 Patriot League) played three games over the weekend against Virginia Commonwealth University (VCU), William & Mary and the University of Richmond.

The Leopards dominated the first leg of their Virginia weekend, winning 3-0 against VCU, however, they could not build on the momentum and dropped the next two games. They lost to William & Mary 21-9 and then to Richmond 25-4.

Despite the significant deficits in the second two games, Lafayette baseball is currently on the upswing as they begin to build momentum following their 0-6 start.

“The first few weeks were tough, mainly because we knew we were better than the way we were playing,” sophomore pitcher Luke Benneche, who was recently named Patriot League Pitcher of the Week, said. “A lot of the things we did well in those games were overshadowed by the final score. We’ve stayed together as a team and are constantly working to put all the pieces together.”

The Leopards got crushed 13-3 during their last meeting against the VCU Rams, but, thanks in part to junior pitcher Nolan Morr’s seven strong innings, Tuesday’s 11-2 win against Rider reoriented the Maroon and White going into their Virginia weekend series.

“The win against Rider felt great. It was how we expect our games to go. Nolan Morr absolutely shoved for seven innings and the offense backed him up,” Benneche said. “Nothing changed about our approach. We played our game, and that was just a glimpse into how good we can be…we definitely had momentum going into the VCU game because we knew what it felt like to win together.”

The VCU game started with some small speed bumps for starter Benneche, allowing a hit and a walk in the first inning and then a hit in the second. However, no Rams players crossed the plate, and the game went to the fourth still scoreless.

In the top of the fourth, freshman outfielder Easton Brenner walked and then stole second to start the inning.

Junior outfielder Pete Ciuffreda then singled him in to put the Leopards up 1-0 before stealing second as well. Ciuffreda was soon brought home by the next batter, freshman Michael Zarrillo to bring the score to 2-0 in favor of Lafayette. Ciuffreda’s performance last weekend earned him Patriot League Player of the Week.

That was more than Benneche needed, as he shut down the VCU hitters without allowing a hit for the rest of the game. Striking out seven on two hits and two walks over seven innings, Benneche notched his first win of the young season thanks to his stellar performance on Saturday.

“My outing on Friday felt really good. I’m still not even close to where I want to be,” Benneche said. “My first two starts I struggled getting through the fourth and fifth innings, and I made some mechanical adjustments to be able to repeat my delivery later into the game.”

The Leopards struck for one more run in the sixth and junior pitcher Jordan Yoder picked up his first save of the season, slamming the door in the eighth and ninth inning to wrap up a 3-0 victory for Lafayette.

After their second straight victory, the Maroon and White looked to be turning a corner as their level of competition was about to increase significantly against William & Mary and Richmond.

The William & Mary game was quickly decided as the Leopards fell to a 10-1 deficit after the second inning. Lafayette was unable to stage a comeback by plating six runs in the fifth and an additional two in the sixth to make the score 11-9.

The home team responded by scoring a combined 10 runs in the seventh and eighth innings to put the score decisively out of reach for Lafayette at 21-9. Brenner notched two runs batted in and sophomore outfielder Justin Grech scored three runs in the loss.

The Leopards did not fare better in the Richmond game. After the first inning, the Spiders did not score below two runs in any of the innings they hit in.

The Leopards managed 10 hits, but they were plagued by bad defense with four errors, falling to Richmond 25-4. The Spiders tallied 28 hits against Lafayette’s pitching, which is the most they have given up all year.

“Saturday and Sunday’s scores do not reflect our team. A few things didn’t go as expected, but that happens in baseball,” Benneche said. “The best teams are able to brush off bad losses and get better from them.”

“We are just as motivated now to win a Patriot League Championship as we were the day we got here in August,” Benneche said. “Don’t let the ‘pards get hot.”

The Leopards will play this weekend in Spartanburg, S.C. for a three-game set against Wofford University. All of the games are available to be streamed on ESPN+.