Performance Review: Broadway’s ‘Aladdin’ shines with special effects, but is lackluster in plot 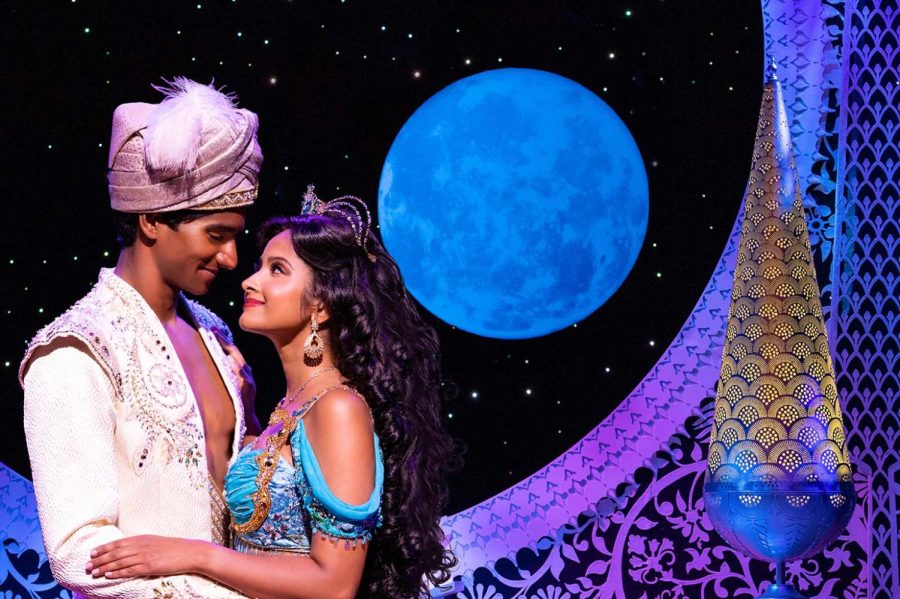 'Aladdin' on Broadway is adapted from the 1992 Disney film. However, its dull plot line fails to match up with the original. (Photo courtesy of AladdinTheMusical)

Lafayette students experienced a whole new world last Saturday when they traveled to New York to see “Aladdin” on Broadway, sponsored by the Lafayette Activities Forum. While the show was impressive in terms of the acting, costume design and special effects, it fell flat when it came to the plotline.

Like the Disney film, “Aladdin” on Broadway tells the story of a young boy who lives on the streets of Arabian desert kingdom Agrabah, who steals food and runs away from the Royal Guards. Unlike the film, however, Aladdin does not only dream of getting out of poverty and finding the love of his life, but also of making his mother proud. Throughout the musical, Aladdin sings multiple songs about this fantasy, which adds more depth to the character than the film.

The show also incorporates additional characters that replace some of the animal sidekicks from the original film. For instance, Jafar’s bird Iago is a comedic character that adds levity to the show and often gained loud laughs from the audience. Abu, Aladdin’s monkey, was also replaced in the show by three comedic friends who support Aladdin along his journey.

However, it is not the changes to the characters that make the show but rather the high-quality acting. Genie, played by Michael James Scott, is the absolute highlight of this musical. His swagger could be felt all the way up to the balcony. Unlike Michael Maliakel’s portrayal of Aladdin or Shoba Narayan’s of Jasmine, the character of Genie is one that requires more nuanced acting to make the show come alive. Without a quality Genie, the whole show would fall flat.

Another aspect of the show that makes it shine is the use of over 8,000 Swarovski crystals in the costume design. Audience members can see the details of the elaborate costumes even from a distance. Every character’s costume, whether it is a main character or someone from the ensemble, has a grand and colorful design that makes the entire show more enjoyable to watch.

The show also utilizes various special effects, which allow Genie to show off his magic as he rises from the floor of the stage, lets magical sparks fly and makes objects appear out of thin air. Yet, the most impressive of all the effects is none other than the magic carpet.

While singing “A Whole New World,” Aladdin and Jasmine embark on a “magic carpet ride.” The carpet soars above the stage, appearing to nearly touch the top lights, as the background twinkles like stars and a piece of blue fabric is rustled to look like waves below. It is unclear what technology they are using to make this carpet fly, which adds to the magic of the Broadway show.

Despite the beautiful costumes, acting and special effects, at the end of the show, one cannot help but feel like something is missing. For the most part, the show really is just a re-creation of the classic Disney film. It lacks the unique plotline of a show made specifically for Broadway. Had the creators chosen to make an adaptation of “Aladdin” in which audiences watched a prequel or looked at the story from a different perspective, it would have added more depth to the original plotline and perhaps given the show a more Broadway feel. Yet, without any major adjustments, the show does not live up to a Broadway audience’s high expectations.

To those considering Broadway’s “Aladdin,” I would say to go to see the artistic quality of a Broadway production, but don’t expect a knock-your-socks-off kind of show.