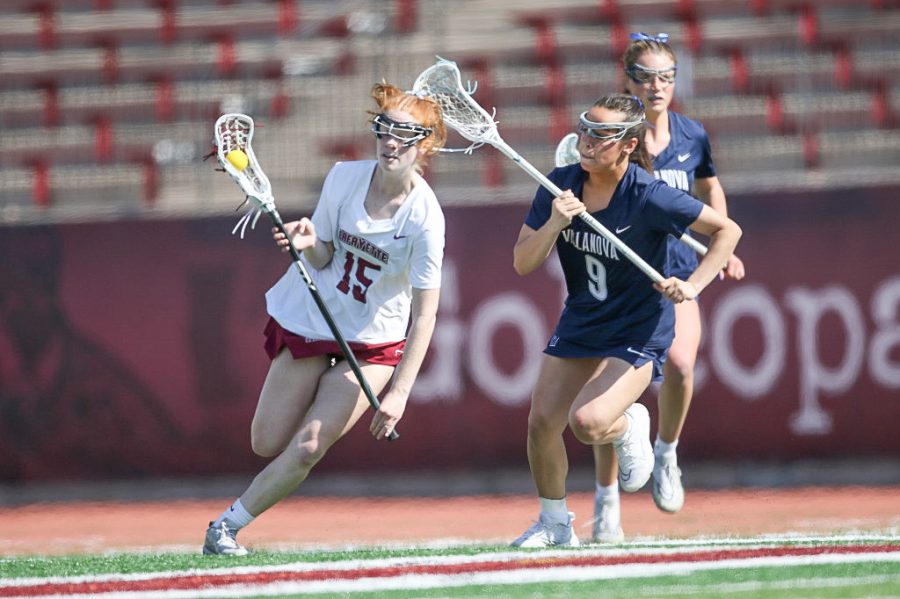 Freshman Nora Burns defends possession against a Villanova player this past Wednesday. (Photo Courtesy of GoLeopards)

The Lafayette women’s lacrosse team (1-6 overall, 0-1 Patriot League) lost to American University 13-9 in its first Patriot League game of the season last Saturday. Despite the loss, the Leopards dominated in shots and ground balls, maintaining a positive outlook continuing with conference play.

“The team was very excited to get Patriot League play underway,” senior attacker Olivia Cunningham said. “We thought of it as a clean slate to show the rest of the league the work we’ve put in so far. We are looking forward to making a statement in the Patriot League this season.”

Cunningham came off of a big performance against Villanova, in which she scored two goals and had an assist. She currently ranks fifth in the Patriot League for shots per game and has totaled 14 goals and seven assists already this season.

“My teammates do a really great job of getting me the ball when I’m open. I’ve been getting doubled early and pressured pretty hard from the teams we’ve faced, so they’ve been great at adjusting with that and helping to get me the ball,” Cunningham said.

Rogers is also making waves in her first collegiate season as her goal tally is now up to four. She scored two against Villanova and had two assists in that game as well.

“I’m definitely happy about the goals, but I couldn’t have done it without all my teammates motivating me both on and off the field,” Rogers said.

Romano has been making strides as well, and has scored nine goals this season.

“I think American really took advantage of our missed shot opportunities on attack, and they were very strong on the draw,” Rogers said. “We had a lot of shots but were not able to convert enough of them.”

The Eagles were 4-8 in free-position shots, while the Leopards went 5-12. Lafayette currently sits in ninth in the Patriot League, while American is in fourth.

“American did a great job coming out hot each quarter, which made it hard for us to reduce the deficit,” Cunningham said.

In terms of the atmosphere in the locker room after the match, Rogers said that Coach Katie McConnell gave an inspiring talk about how confidence can change the outcomes of games.

“She said the skill and the drive are there, but having more confidence in ourselves and our game plan will get us a lot further,” Rogers said.

After having played four home games in a row, The Leopards will be traveling to Lewisburg tomorrow at 3 p.m. to face Bucknell.

“We’ve been focusing on keeping the energy and momentum up coming out of halftime, and I think we did well with that on Saturday,” Cunningham said. “We hope to do more of the same as we move towards getting ready for Bucknell.”