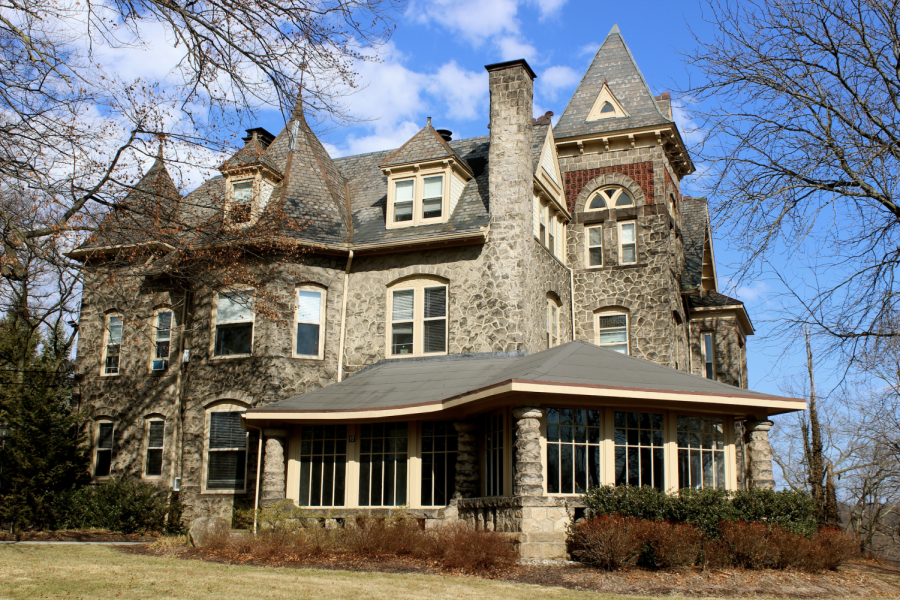 Katy Bednarsky, who works in the Feather House, will oversee the new peer educator program. (Photo by Elle Cox ’21)

Beginning this fall, peer education on topics of interpersonal violence will take place under a new department and a new name.

The new program will replace peer education that was previously done through student organizations Pards Against Sexual Assault (PASA), founded in 2017, and One Love, founded in 2020.

The program is an initiative by Katy Bednarsky, the college’s first student advocate and prevention coordinator who came to the college last summer. Bednarsky defined interpersonal violence as a term that includes sexual assault, sexual violence, dating and domestic violence and stalking.

With the help of College Chaplain Alex Hendrickson, Bednarsky is framing the program to resemble that of the Kaleidoscope peer educators program. Two students, one senior and one junior, will serve as coordinators, and the rest of the peer educators will work in a “flat hierarchy,” according to Bednarsky, stepping up in leadership capacities wherever feels comfortable to them.

Bednarsky explained that the reason behind the formation of the group stems from research she has done on colleges around the country, most of which have a peer education department housed under the leadership of a staff role or department. This is done in part for the long-term sustainability of the program, which can be more guaranteed under a staff role than a student organization.

“Student organizations…could eventually turn over just with people graduating, things like that…It is a possibility that say five years from now, PASA doesn’t exist, so we need a stable, consistent thing,” Bednarsky explained.

“The benefits of having a full-time staff member who is a professional prevention specialist oversee the college’s peer education program cannot be understated,” Women’s, Gender and Sexuality Studies Professor Dana Cuomo wrote in an email. “This brings a level of continuity, consistency, and expertise to interpersonal violence prevention programming that is necessary for ensuring that Lafayette’s programs are grounded in evidence-based research and are effective over time.”

At orientation beginning this fall, peer educators will also work with the Leos to provide interpersonal violence education to first-year students, delivering content from a curriculum developed by Annika Murray ‘23, Libby Mayer ‘22, Andrea Rivera ‘23 and Ella Goodwin ‘21 in an EXCEL project with Cuomo last year.

Peer educators will undergo thorough training before their work begins this fall. The roughly 15 students will complete around 32 hours of training, according to Bednarsky. Sixteen hours will be the National Association of Student Personnel Administrators (NASPA)’s Certified Peer Educator training, initially launched by BACCHUS. The other 16 will be more specific in content to Lafayette.

When the peer educator program was first introduced to members of PASA, One Love and Kaleidoscope, Murray, one of PASA’s co-presidents, explained that there was confusion and concern among the students who were wondering what the future of their organizations would be.

Murray emphasized that especially for members of the student-run organizations who have been involved for a long time, the change is a lot to process. However, ultimately, they believe that the change will be beneficial in the long run.

“We, me and [PASA Co-President Mayer], have been in the organization so long and have seen it go through so many changes already. All we want is for peer education and sexual assault prevention to continue and get better at Lafayette. And I think that genuinely, this new structure is going to do that,” Murray said. They added that PASA’s longevity is “not guaranteed,” so it needs to be standardized.

Murray also said, however, that “the question remains of what PASA’s role will be in the future.”

Bednarsky said that she anticipates some overlap between PASA and One Love members and peer educators next year.

“For students in those organizations that maybe have historically had or felt the burden of facilitating peer education, [I] see them occupying more of the activism and advocacy space,” Bednarsky said.

Cuomo reiterated this idea and added, “This transition in no way minimizes the work that PASA (and One Love) have done in the last 5+ years. Rather, this is the next step in peer education at Lafayette, where peer educators work under the leadership and expertise of a prevention specialist and receive standardized training alongside the support, consultation and resources that come with a full-time staff person dedicated to this kind of work.”

“It’s a little bit sad that it won’t be [people in] the blue t-shirts giving the workshops, it’ll be a different colored t-shirt. Might be the same people, but it’ll be under a different kind of brand,” Murray said.

Bednarsky acknowledged these feelings that might come up for students who have a strong connection to work.

“It is a shift, or it might feel like a loss, but it really is that shift to push the work that they’ve already been doing further,” she said.

Bednarsky also acknowledged the possibility that One Love will not operate as a functional chapter next year, in which case peer educators would deliver One Love escalation workshops as part of the repertoire.

“The most important thing is that PASA and One Love and Kaleidoscope and all the students involved with those organizations support the new peer educator group and really do a good job of advertising it,” Murray said. “Because it won’t be good if we don’t talk about it and make sure good people sign up and apply.”

Murray said they are among the students who have applied so far.

As of now, only the two coordinators of the program will be paid. Bednarsky said this is typically the trend, especially at smaller institutions.

“We are doing a job that the school needs to remain compliant to Title IX and other regulations, so I think we should all be paid and should have been paid for a lot of our work that we’ve done already. But we’re lucky to have students that don’t care and still want to do the work,” Murray said.

Overall, Bednarsky commended the work PASA has done since their founding in 2017.

“I was personally just so impressed by the work that [PASA] has done…with a solidified collaboration, we can just take it further and expand and reach different areas of campus,” Bednarsky said.

Applications for the program are due at midnight tonight, March 25. Bednarsky and Hendrickson will begin reading the applications and selecting students to be peer educators shortly. In the future, Bednarsky said, there will be more student input in these selections.