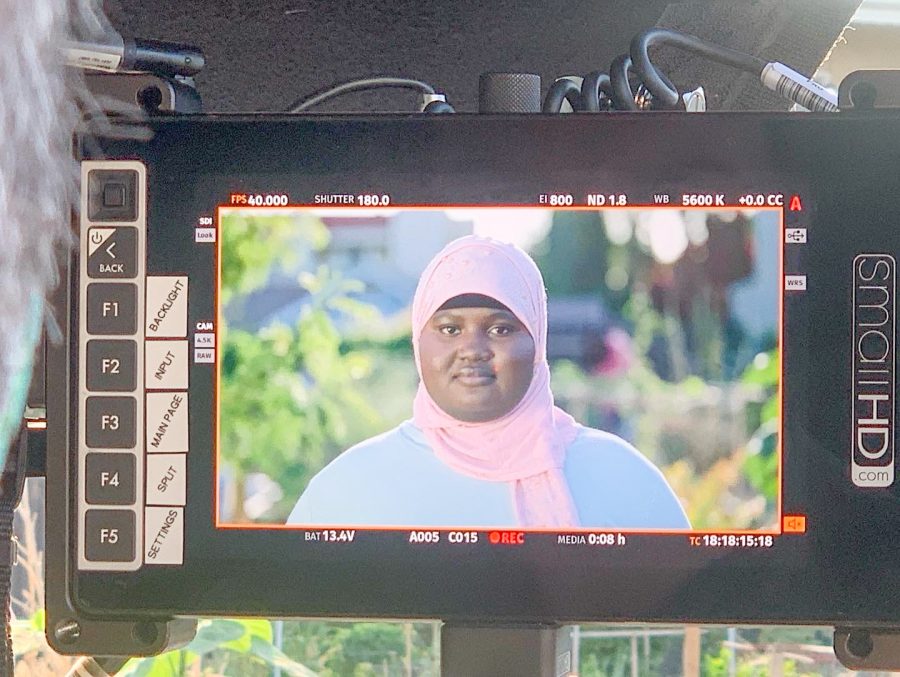 In middle school, Fatimata Cham ‘23 was told she was the next Malala Yousafzai. Now, they appear in an Apple TV show together. (Photo courtesy of Fatimata Cham '23)

When a casting agent approached Fatimata Cham ‘23 with the opportunity to be featured on Apple TV’s “Dear…” docuseries alongside Malala Yousafzai, she did not believe it.

“I actually did not know anything about this series at all. A casting agent reached out to me via social media, and I didn’t think it was real. So I didn’t respond,” Cham said.

After another message from the agent, she decided to give it a chance. Three weeks later, she found herself in California on a film set.

“Dear…” follows a different celebrity each episode as they tell their story and read letters from people whose lives they have touched. Cham appears in the seventh episode of the second season, which premiered on March 4. Her letter was to Yousafzai.

Cham hopes that young Black and Muslim women are able to see themselves in her as they watch the episode.

“I think it’s really important for me to share my experiences, because growing up, I never really saw someone who looked like me on TV. With Black women in particular, there’s a certain trope that’s always trying to be pushed forth. It’s never about us being authentically ourselves and who we are as people. It’s always about trying to fit a certain narrative that can be destructive at times for Black women,” Cham said.

“As a Muslim person, a lot of the times the hijab is not shown in a positive light. Although my experience is my personal narrative, I think it can shed light and give a lot of other Muslim girls the courage to share their stories as well,” she continued.

In her letter to Yousafzai, Cham tells the activist about the work she did in her district in the South Bronx helping implement incentives that offset the negative effects of a decreased sanitation budget.

Cham wrote in this letter, “you helped change the mindset of a generation of people and the perception of Muslim women because of your courage and selflessness. Hopefully, I can make an impact on environmental injustice and be an inspiration to young Muslim women around the world just like you.”

“I didn’t want my story to just be a story of this girl [who] struggled so she got into activism. I wanted it to be a story of like, this is truly something I’m passionate about,” she said.

Cham used this opportunity to raise awareness about environmental issues impacting marginalized groups in her hometown.

“I wanted to be reflective of the community that has really contributed to my growth as an individual, and also shed light on my community in the South Bronx and issues of environmental injustice, and how they’re deeply intertwined with women, because women are oftentimes most vulnerable when it comes to climate change and issues of environmental injustice,” Cham explained.

“I think it’s vital that if we want to combat issues of climate change, we also combat gender and equity as well,” she said.

Cham takes inspiration for her activism from Yousafzai’s work in education.

Cham centers her activism around one concept: “Speak from your own experiences.”

“If someone is from a different identity, instead of me taking up space from them, I try to uplift them and amplify their voices,” she said. “I think that’s more important than me wanting to center my own activist notions.”

At Lafayette, Cham has continued her activism as the director of the Equity and Inclusion Committee in Student Government, president of the Muslim Student Association, a Kaleidoscope social sphere educator and a founding member of the Dear Lafayette Coalition.

Cham described the experience of being in “Dear…” as “full circle.”

“I just look back to my eighth grade self graduating, thinking about how my friend literally wrote in my yearbook that I was going to be the next Malala Yousafzai, and I’m literally in a [show] with her,” she said.

Cham knows that both of their ambitions are crucial.

“Whether or not we cross paths again, I do know that both of our works are very vital to the liberation of the people that we’re trying to center and uplift and amplify,” Cham said.