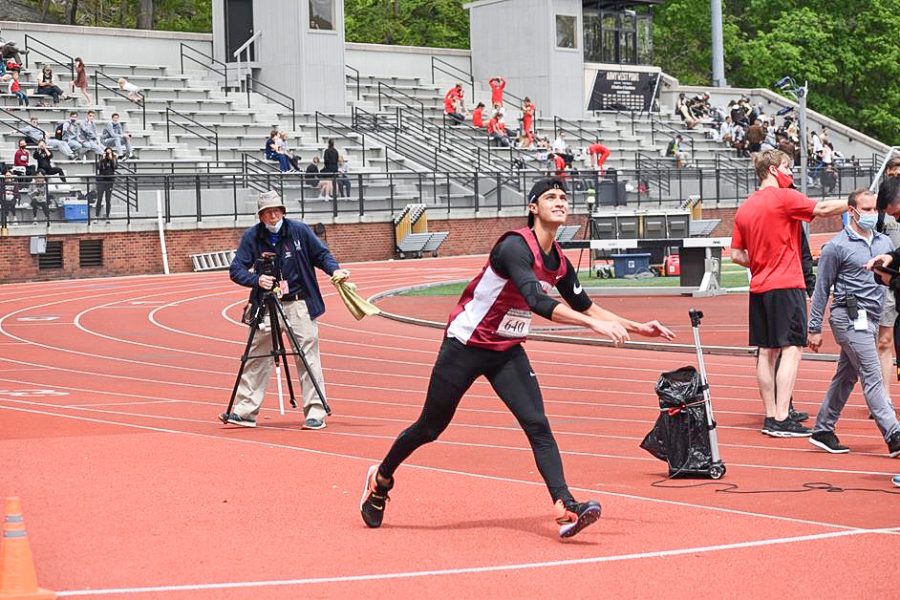 Senior Billy Prebola participating in the javelin this weekend, in which he finished sixth and achieved a personal best as well as a third-best mark in school history. (Photo courtesy of GoLeopards)

This past weekend, the track and field team began their outdoor season with the Bob Davidson Invitational in High Point, N.C. The highlighted Lafayette performance came from senior Billy Prebola in the javelin as his mark made school history. The invitational did not keep official overall team scores.

“It was great to be able to compete in warm weather and see some good competition like colleges in the ACC,” junior thrower Andrew Swiniarski said.

On the women’s side, freshman Julia Greeley placed fifth of 12 in the Group B pole vault with a mark of 10′ 8”.

Sophomore Juliette Delmotte then finished sixth of 15 in the triple jump with a mark of 38 4/14”.

“[The] women’s team did well, with big performances especially in hammer, sprints and jumps,” Swiniarski said. “I can at least speak on Erin O’Leary and Solapse Fakorede for their big opening throws in hammer, and Jill Waraback running 15.05 coming off of an injury.”

Coming off a seventh-place finish at the 2020-2021 Patriot League Championships, Prebola placed sixth of 24 in the javelin this weekend with a final mark of 215′ 8”. This event was competitive, as multiple athletes that were ahead of Prebola have made it to the first round of NCAAs in the past.

His sixth-place finish was his personal best by 14 feet and is the third-best throw in school history in the event. His finish is an  Intercollegiate Association of Amateur Athletes of America (IC4A) qualifier.

Senior Dylan Drescher finished in 11th in the javelin with a mark of 179′ 4”.

Senior Jordan Anderson finished second of 23 in the long jump with a mark of 23 21/2”. Anderson has been a consistent competitor for Lafayette this year, placing at several meets over the course of the season. His jump was an IC4A qualifier as well.

“It was great to see Billy Prebola come out with a huge opening mark,” Swiniarski said.

“Once we get deeper into the season, I think we’ll start to see better performances overall because we’ll be in more peak condition,” Swiniarski said, “but this past week was a really good opener to see what we can do for the rest of the season.”

“The Lafayette-Lehigh dual meet is definitely something we look forward to every season. This year seems a little more special to a lot of people because we haven’t had a normal rivalry dual meet outdoors since 2019,” Swiniarski said. “Lehigh is a team we want to beat both at the dual meet and at Patriot League Championships, so it’s an opportunity for us to show the whole league that we can do some damage in May when the championship meet rolls around.”