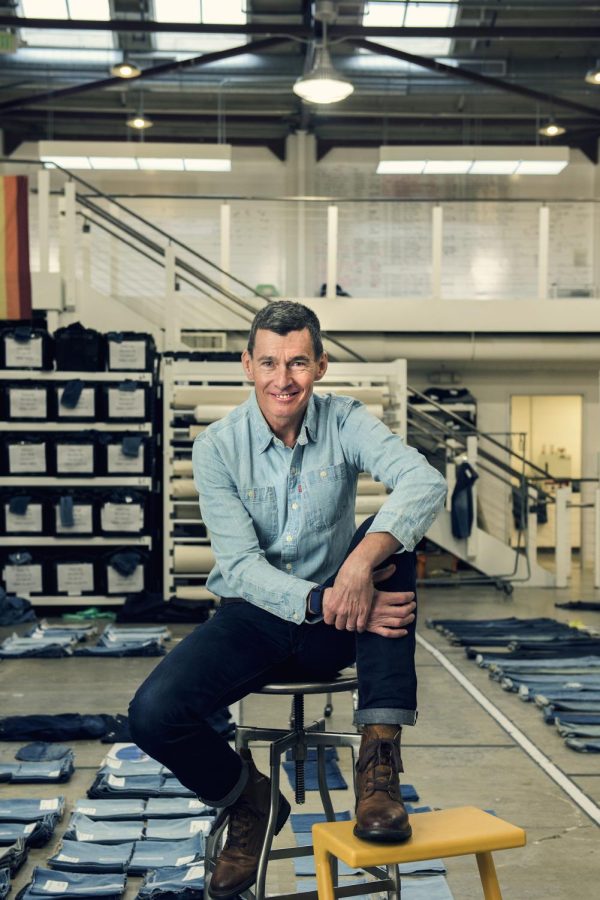 When Chip Bergh ‘79 joined Levi Strauss & Co. as president and chief executive officer in 2011, “the house was on fire.” The company had nearly gone bankrupt a few years prior; it was losing shares and had not grown consistently in 15 years.

In the 11 years since Bergh took the helm, the company has grown from $4.2 billion dollars in revenue to north of $6 billion.

This May, Bergh will return to campus to speak to the graduating class of 2022 and the class of 2020 the following day.

Bergh first set foot on campus during freshman orientation in 1975. When he walked past the ROTC table, a sophomore student stopped him, asking if he had ever considered joining the army.

“He said, ‘well, you should sign up for it. You’ll immediately get outfitted in a military uniform, and even if you decide to drop out in the first semester, you get to keep your boots,’” Bergh said.

“I look back on it and both the choice of Lafayette College and my selection of going into the Army, ROTC, those were pivotal life-changing moments,” Bergh said.

After his graduation from college, Bergh’s four years in the ROTC landed him in the United States military for an additional four years, during which he served in West Germany before moving on to P&G. Here, he had to learn “everything by doing.”

Bergh then climbed the corporate ladder for 28 years before becoming one of the only successful CEOs to enter the apparel industry from an outside field.

“I had an amazing career at P&G. I remember the day I walked in the door thinking to myself, if I could just make it to brand manager, I’m a success,” Bergh said. “Most of the people in my class at P&G were alums of Harvard Business School, Northwestern, some of the top business schools, and I had my military experience. So I had real life leadership experience and no practical business experience, no formal education in business.”

His last assignment at P&G was group president of the male brands, heading up companies like Gilette and Old Spice, which totaled about $7.5 billion in revenues.

Bergh was the first Gillette executive at P&G headquarters during the $57 billion acquisition, which was when he decided he wanted to be a CEO. When he realized it was not likely to happen at P&G, according to Bloomberg, he felt it was time to move on.

“I kind of felt like there was more that I could do, and I still have more in me. When you get to your early fifties, you start thinking about: what’s your legacy going to be?” Bergh said.

The decision to join Levi Strauss & Co. came from a variety of factors, including a desire to be a part of the world-renowned company.

“The brand was like gold back in the day, and we’ve just lost our way,” Bergh said.

“The combination of the brand itself, such an iconic brand, the company’s values which are really, really meaningful and very closely aligned to my own personal values, and this opportunity to turn around one of America’s oldest companies, one of America’s greatest brands, and make a difference was just too big of an opportunity to pass up,” he continued.

In addition to bringing Levi Strauss & Co. back to the spotlight over the last decade, Bergh has publicly committed the company to improve diversity, equity and inclusion efforts.

“I think a lot of the issues that we care about on this campus around diversity, equity inclusion, he’s led in the retail space,” President Nicole Hurd said. “He’s an innovator. He’s an entrepreneur, I think he captures a lot of what’s best about Lafayette in terms of really being both intentional and inclusive at the same time.”

In 2020, Bergh described his biggest failure as CEO as not making more progress in improving diversity, equity and inclusion within the company.

“It’s the biggest miss in my ten and a half years here. A diverse organization is always going to perform better than a homogenous one, and we are not where we need to be,” Bergh said.

He acknowledged that the company would likely be stronger today if they were more diverse.

“That’s why it has got to be part of my legacy, I think it is part of what sets this company up for the next big wave of growth,” Bergh said.

Bergh praised the college’s efforts to improve diversity, equity and inclusion on campus.

“The world has changed dramatically, and part of why Lafayette is such a great school is it has not been afraid to transform itself and to change with the times,” he added.

While the campus may have changed since Bergh was a student, he is looking forward to engaging with students and faculty during the festivities this May.

“While the school has changed so much…the heart and soul of the school is still the same. It is such a special place, and it is going to give you not just lifelong memories, but it is going to give you the foundation to launch into adulthood and to launch into a successful career,” Bergh said. “I can say that from experience because I know that I am the person I am because of Lafayette and because of my military experience. There’s no question about it.”