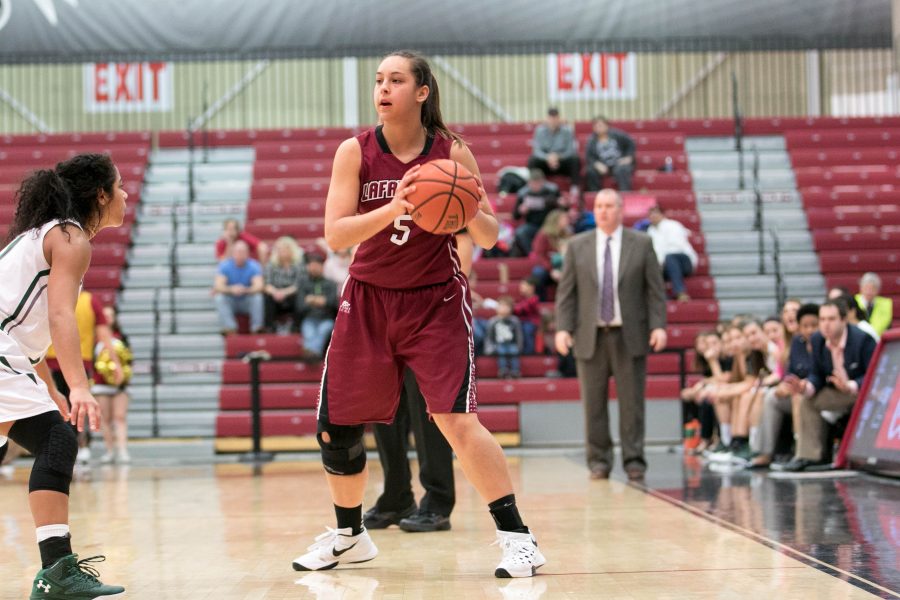 Michael Keating: Two weeks ago you took part in a NCAA leadership conference in Phoenix, Ariz. What was that experience like?

Anna Ptasinski: I had an amazing time getting to know more about current and former student-athletes and administrators from across the country. I had so much fun sharing stories, working through problems and just interacting with everyone who was there.

MK: How was the weather in Phoenix? Was it better than the wet snow we got?

AP: The weather in Phoenix was awesome. I was worried because I checked the weather beforehand, and the high was supposed to be 95 degrees. When I was there, it was about 90 degrees each day, sunny and beautiful.

MK: How many people from around the country were there?

AP: There were about 320 people total there. For Division 1, each conference had two representatives, so 64 total student athletes. In addition, conference administrators, various athletic directors and sports administrators also attended.

MK: You were the only representative from Lafayette, correct?

AP: Yes, I was selected to be the female representative on behalf of the Patriot League.

MK: How do you wish to apply the lessons learned at the conference to the student body at Lafayette?

AP: Something that we discussed a lot was that everyone can be a leader. It is the job of one leader to inspire, transform and serve others in order to make them leaders. We all have various strengths and weaknesses, but when we all work together, nothing can get in the way.

MK: Do you think you can somehow use these lessons on the basketball court next season?

AP: I think that leadership can be translated in all aspects of life. From being in class, in the real world or on the basketball court, leadership is always necessary.

MK: Speaking of basketball, what’s the early outlook on next season?

AP: I am so excited for our next season. Our team now has had one season with Hall of Fame Coach Theresa Grentz, and we are all thrilled for next year. We have been working hard through the off-season and will continue to do so. We have our ultimate goal in sight, winning a Patriot League Championship.

MK: How did you get into basketball?

AP: I first started playing basketball when I was about four years old. For the longest time basketball was just for fun. But as I got older, I knew I wanted to become a Division I basketball player.

AP: On Halloween, Coach likes us to dress up for practice. In honor of Coach’s story, we decided to dress up as nuns. [Coach Grentz went to Immaculata University, which was all girls and run by nuns.] I think we were all expecting a super fun, game-filled practice, but instead we worked super hard. The boys afterwards were scrimmaging against Rutgers, so their team all came in to see us playing in nun’s outfits.

MK: Who’s the best player in the family, you or your brother?

AP: Overall player, I have to give that to my brother [former Lafayette basketball player Joey Ptasinski ‘15]. He is bigger, stronger, faster and more athletic than I am. A better shooter though? That is a different question. I am biased, but I have confidence in myself.

MK: How is Joey doing in his ‘post-Pard’ life?

AP: Joey is doing great. Luckily, he is working in a hospital this year as a medical scribe in Lebanon, Pa., so he is only about an hour away. However, he will be moving away to start medical school in June. I am so excited for him to reach his dreams of practicing medicine in the future and wish him much luck, but I will miss him so much next year.

MK: What’s your goal for the next two seasons at Lafayette?

AP: I definitely want to win a Patriot League Championship. I want to play and win in the NCAA March Madness tournament. Most importantly, I want to make the most of every opportunity.”

MK: What is your favorite guilty pleasure?

AP: When I find some extra time, I love to play the piano and do crafts.

MK: If money were not a thing, what would be your dream job?

AP: I would absolutely be a doctor. I aspire to be a surgeon, and that is truly my dream in life.

AP: “Somewhere behind the athlete you’ve become and the hours of practice and the coaches who have pushed you is a little girl who fell in love with the game and never looked back… play for her.” – Mia Hamm