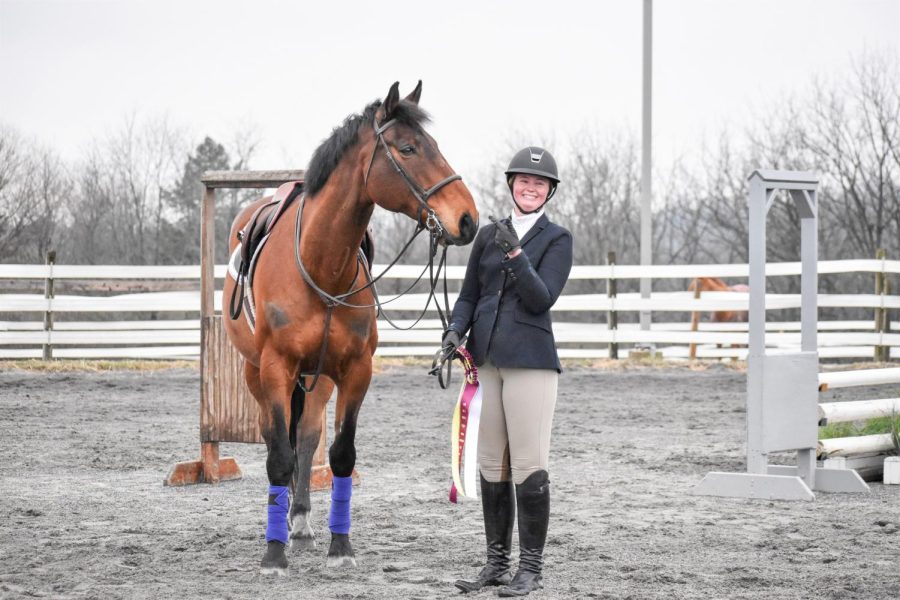 Sophomore Grace McEneaney participating in regionals, where she placed second and qualified for the upcoming zones competition. (Photo courtesy of Maggie Sigmond-Warner '23)

The equestrian team received the highest number of cumulative points of any team in the region throughout the regular season, earning them the title of Regional High Point team.

“That was very exciting and emotional for us,” junior Maggie Sigmond-Warner, one of the rising co-captains for next season, said.

On March 5, freshman Daisy Wheeler won High Point rider in a competition hosted by Lehigh. Wheeler, along with sophomore and next year’s co-captain Grace McEneaney placed first on the flat and over fences in their different divisions.

The following day, Lafayette co-hosted a show with Scranton, where McEneaney won first once again on the flat.

This was senior Julia Alves’s first show, and she ribboned in her event.

Freshman Connor Port placed first, and sophomore Zubair Ali placed second, who only showed for his first time at the end of last season.

“It was a really emotional moment; we are all so excited, and it was honestly one of the big highlights of the season,” Sigmond-Warner said. “It’s so refreshing to see somebody start from nothing and then work so hard at it to be able to show off the results. We are all so supportive of him, he’s just such a key person to have on this team.”

The next day, the team went to a show hosted by Rutgers where sophomore Anabel Stein and freshman Ashley Holland won first place for the first time.

Sigmond-Warner, McEneaney, junior Lindsay Strachan and seniors Margo Mukherjee and Amaya Escandon all qualified to compete individually at the regional show that took place this past Sunday. In order to qualify for this individual competition, the riders had to point out of their division, which is done by accumulating 36 points in that division.

“We were really lucky, we sent five riders to that. We all did very well, and [McEneaney] was fortunate enough to move on to zones individually,” Sigmond-Warner said. “At zones, if she places in first or second she’ll move on to nationals as an individual.”

Lafayette ended the season as the Regional High Point team which qualified them for the zone finals as a team as well. The team’s scores from regionals and zones could help the team on the way way to nationals.

“We have a really strong team this year, and we’re really excited for the zone finals. We’re hoping that if that goes well and we place High Point Team in the zone, then we have a chance to go into nationals,” Sigmond-Warner said. “That would be the ultimate goal, but we’re just happy to have made it to zones as a team.”

The zones competition will take place tomorrow at Centenary University, a school that is known for their equestrian program.

Nationals will take place May 5 through 8 in Harrisburg, Pa. With both the team and an individual attending zones, the equestrian team has momentum heading into the championship portion of the season.